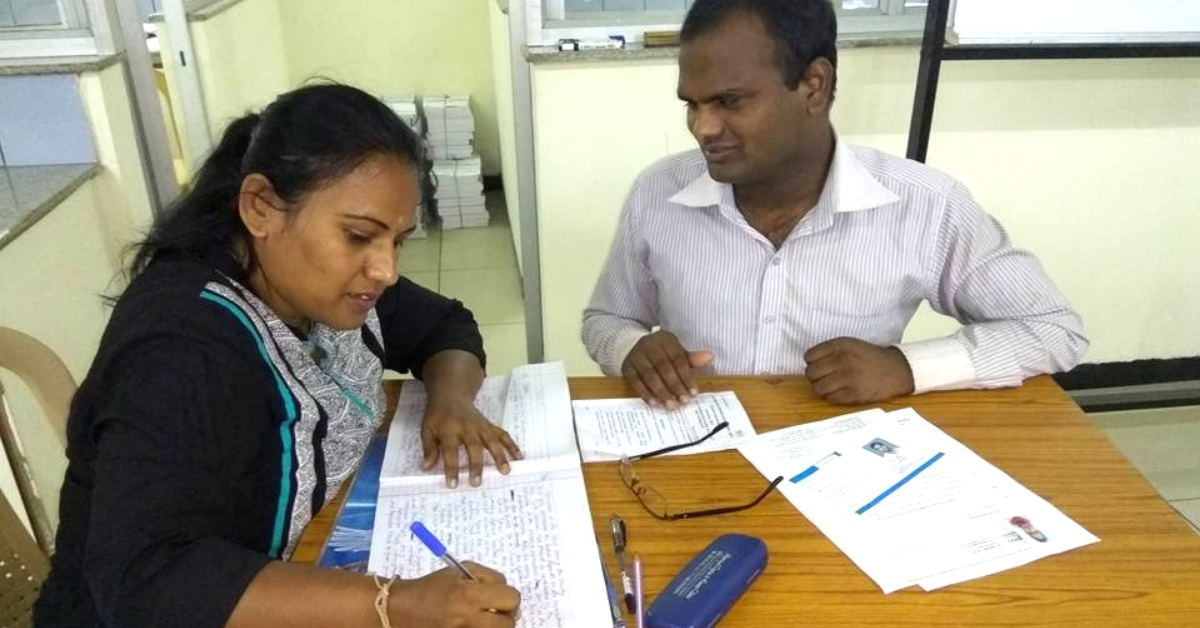 “Pushpa ma’am is like a Goddess to us. She understands that my boy is smart but because of his condition, he speaks slowly”, says a grateful parent of a student with cerebral palsy about the amazing woman who won the Nari Shakti Puraskar 2018.

On an ordinary day, Bengaluru-based Pushpa NM is just another techie who is currently between jobs.

However, in her spare time, she is a scribe who has provided invaluable support to over 700 differently-abled students, by writing exams for them.

The Better India spoke to 31-year-old Pushpa who has been juggling several media interviews after being awarded the 2018 Nari Shakti Puraskar.

Pushpa’s journey as a scribe began in 2007 when her friend, who runs an NGO, requested her to write exams for a visually challenged student, and she agreed to do so.

“I have grown up in difficult times and come from an impoverished background. Money has always been secondary for us. It was the satisfaction of doing something nice for a person and watching them smile that makes us happy.

Living near an NGO that works for visually impaired people means I meet them quite often—sometimes in shops, or while crossing roads. I always try to help them, and working as a scribe is just another step towards this,” she recalled.

Pushpa vividly remembers an incident from when she was in Class 7, as it was her first experience of standing out from her peers because she was poor.

“I was asked to leave the exam hall since my parents could not afford to pay the school fees. Thankfully, our neighbour helped me out. Years later, I faced a financial crisis while pursuing my Pre-University Course (PUC), and a polio-affected person came to my aid,” she said.

Although she could later repay these good samaritans, these incidents strengthened her belief that it was her moral responsibility to help the needy as much as possible.

We spoke to Ramesha B, the father of 22-year-old Karthik R, who has cerebral palsy.

“Pushpa ma’am is like a Goddess to us. My son is a brilliant student who scored first class in his class 10 exams when she was his scribe. But in his PUC exam, he missed the first class by two per cent. Pushpa ma’am told me that there was a chance that the scribe he had wasn’t used to working with students who have cerebral palsy. She understands that my boy is smart but because of his condition, he speaks slowly. That he expresses his answers differently, she has promised us that she will always support Karthik and appear for his exams with him,” said the doting father.

Speaking about how she has helped hundreds of students in the past 12 years, Pushpa says, “I write between 50-60 exams every year, which is on an average, one every week.

Each exam is equally special to me, and I make it a point to form a rapport with the student before the exam begins. The exams last for about 3-3.5 hours. When I was employed, I used to take the day off or change my shift to appear for the exams. I would compensate for my lost hours, and my company would always cooperate,” she explained.

Pushpa explains that three things are crucial to becoming a scribe—patience, confidence, and coordination.

“What I write decides their results and their future. Hence I am alert and conscious when I scribe exams. I stay calm even as the candidate gets tense at the exam hall,” she had informed the Times of India.

During her interview with TBI, she elaborated on that.

“You need to be very patient while writing the exams.

For example, I have had to stop for a good few minutes till the student jogged his memory for the right answers and sometimes, I have had to repeat the questions several times.

You also need to coordinate very well with the student, so they don’t miss out on their valuable time. Your confidence in the way you write and listen to them can help them,” she said.

One striking detail she has noticed about the students she helps is that they always provide concise and brief answers. This is one of their biggest strengths that we can all learn from, and never try to change.

“If the students are asked to write five features, that’s all they will write, and that really helps their exams,” she says.

She also has another important point to add.

“As citizens, we should help and encourage them but not pity them. For example, as a scribe, I cannot write answers for them if they don’t know it, but I do. That’s not right. Or on a regular day, say you are helping someone cross a road, just guide them. Don’t stop them from walking. That’s not helping. They are specially-abled people and are gifted in ways that we are not. One should respect that.”

You may also like: These Kerala Scientists Have Designed a Low-Cost Bra That Detects Breast Cancer!

While reports indicate that efforts are on to create a scribe bank comprising suitable candidates to help differently-abled students write their examinations, it is also true that scribes are not easy to come by, and finding a suitable one is a stressful process.

This is where the extraordinary efforts of people like Pushpa must be praised.

“I feel delighted when I write exams for these students, and they score good marks. I don’t remember if I ever felt this happy after writing my own exams,” she concluded.

Whether through eye-donation, working for their cause or helping them write exams, like Pushpa, each one of us can take small steps to ensure that the world is a more accessible and safer place for those less privileged than us.