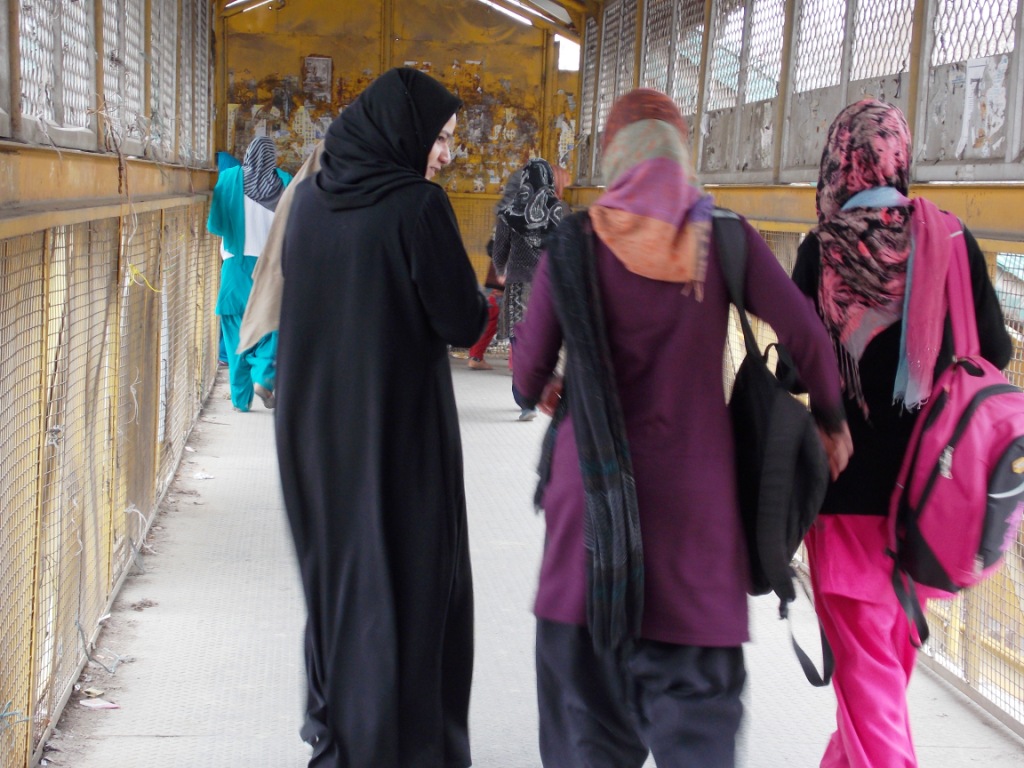 Today, Kashmiris are looking for change – as amply displayed with the unprecedented voter turnout during the recent polls – and some enterprising women are even leading this bid for transformation. (Credit: Sana Altaf\WFS)
Promotion

Meet the bold, vibrant and ambitious breed of young Kashmiri women who are independent and confident in this book by author Manisha Sobhrajani. Rising above the continuous turmoil that the state faces, these women are the new face of Kashmir.

Living amidst the chaos, confusion, turmoil and trauma of a prolonged conflict, the people have had no choice but to endure what came their way. All discussions have, however, centred round how the men have endured the long conflict. What about the Valley women?

Countless mothers, wives, sister and daughters have spent a better part of their lives negotiating space for their menfolk and living with strife in their own way. But, today, Kashmiris are looking for change – as amply displayed with the unprecedented voter turnout during the recent polls – and some enterprising women are even leading this bid for transformation.

In this excerpt from ‘The Land I Dream Of – The Story of Kashmir’s Women’ by Manisha Sobhrajani, published by Hachette India, meet new age women who know what their preferences in life are and are not afraid to speak their mind.

My favourite haunt in Srinagar city is Pari Mahal, a garden palace located at the top of the Zabarwan range. It consists of six terraces and offers a panoramic view of the valley. The ruins of an observatory built by Dara Shikoh, the mystic son of the Mughal emperor Shah Jehan, the gardens were used for teaching astronomy and astrology.

I wandered around aimlessly for some time before settling at a spot. I could see a group of women having an animated conversation; they looked like Gujjar women to me, and amidst them was an extremely attractive, city-bred young woman, as was obvious from her clothes and mannerisms. I observed the group for some time, and it was clear that they were bound to each other, and the connecting thread was the young woman. I couldn’t help but overhear parts of their conversation, which revolved around embroidery, fabric, colours and the like. Curiosity got the better of me, and I went up to the group and introduced myself. The women were amused, yet welcoming. The young lady introduced herself to me as Roshan.

From an affluent family, as was obvious, Roshan worked with a group of Pahari/Gujjar women who had been trained in basic stitching and tailoring, and when she coupled that with their expertise at embroidery, the products they created were a sell-out. Roshan had carefully and tediously carved out a niche market for the women’s products – exquisitely hand-embroidered bags, dupattas, head scarves, shawls, wallets, chappals etc.

I sat with the women as a silent observer, while they went about discussing marketing strategies, reflecting over new trends, arguing about prices and contemplating whether family life was better before or after they started earning their own money. Amidst all this hullabaloo, they made it a point to let Roshan know it was about time she got married, a suggestion Roshan had clearly heard many times before and dismissed with a mere shrug of the shoulders. After bidding the women farewell, she then invited me to join her as she was going into town to meet Jahanavi, a friend of hers.

As we sat waiting for Jahanavi to come, Roshan and I exchanged brief notes on our lives. Roshan’s family was one of those long-standing, elitist families of the valley whose presence was as old and as taken for granted as the mountains of Kashmir! Running a chain of hotels along the tourist circuit in Kashmir, and with several business arrangements across the world, the family was a name to reckon with.

While Roshan was aware of the privileges of being part of such a family, she was also extremely conscious of the family’s social position and its ability to use that very position to contribute towards the growth of her society. She managed a part of the hotel business for her family, simultaneously working with Gujjar women of the area and helping them place themselves somewhat better vis-à-vis their respective families as well as the society at large.

Roshan had chosen to put the issue of her marriage on the backburner for two major reasons: one, she was not willing to put aside all her work and jump into matrimony, not knowing how it would turn out to be; also, she did not know whether she would have the time and space to carry on with the same work post-marriage. The second reason was that she was yet to meet a man willing to understand and accept her passion and devotion to her work, and who would give her work its due respect and recognition in their lives.

On this note, Jahanavi made her entry into the café where we had parked ourselves for the afternoon. Young, vibrant and beautiful, she greeted Roshan with the warmth of an old friend and welcomed my presence in the true spirit of Kashmiriyat. When I asked Jahanavi about herself, she suggested that Roshan and I come with her to her workplace.

Driving along the Dal lake, just when winter was making way for summer and intermittent rain made the valley look ethereal, we reached the polo grounds. … Roshan told me she was the manager of the grounds, and this pleasantly surprised me. I suddenly had a mental image of Jahanavi taking charge of the grounds, giving instructions for the upkeep and maintenance, managing high-end events and dealing with the administrative aspect of it. I couldn’t help but look at the enterprising woman in awe. She told me it was no easy task, considering she had faced a lot of opposition on many fronts to come to this point.

I considered this casual meeting with Roshan and Jahanavi as my formal introduction to the new breed of Kashmiri women, who not only knew how to take matters in their own hands but also how to deal with those matters, whether related to their personal lives and families or the wider spectrum of societal consciousness. These ‘modern’ women knew what their preferences in life were; what’s more, they even knew what options and choices to make, and what rights to exercise; they knew their minds well; and when to speak their mind and when to remain silent. …

Talking of liberated women and societies, I was to meet with Firoza and Sophia, friends of Roshan and Jahanavi. Firoza worked as a senior sub-editor with one of the local leading English dailies and Sophia was an aspiring candidate for the Kashmir Public Services Commission, J&K’s civil services competitive examinations. I met them at Residency Road, from where we made our way to my favourite (and one of the very few) coffee shops in town, Café Arabica. …

As we were talking, we were joined by Roshan and Jahanavi, with another vivacious woman who had ‘rebellion’ written all over her. She was introduced to me as Aliya, and I was told she was beginning to create ripples in the art circles of Kashmir. She was a painter, and her forte, according to her, was surrealism. … Sitting with these five women – Roshan, Jahanavi, Firoza, Sophia and Aliya – who defined the modern Kashmiri woman, I was having difficulties reconciling to all that I had seen and experienced in Kashmir over the past decade. This new breed of self-made, independent Kashmiri women knew their minds well and were not only capable of making their own decisions, but would also not have it any other way.

(Excerpted from ‘The Land I Dream Of – The Story of Kashmir’s Women’ by Manisha Sobhrajani; Published by Hachette India; Pp: 200; Price: Rs 399.)