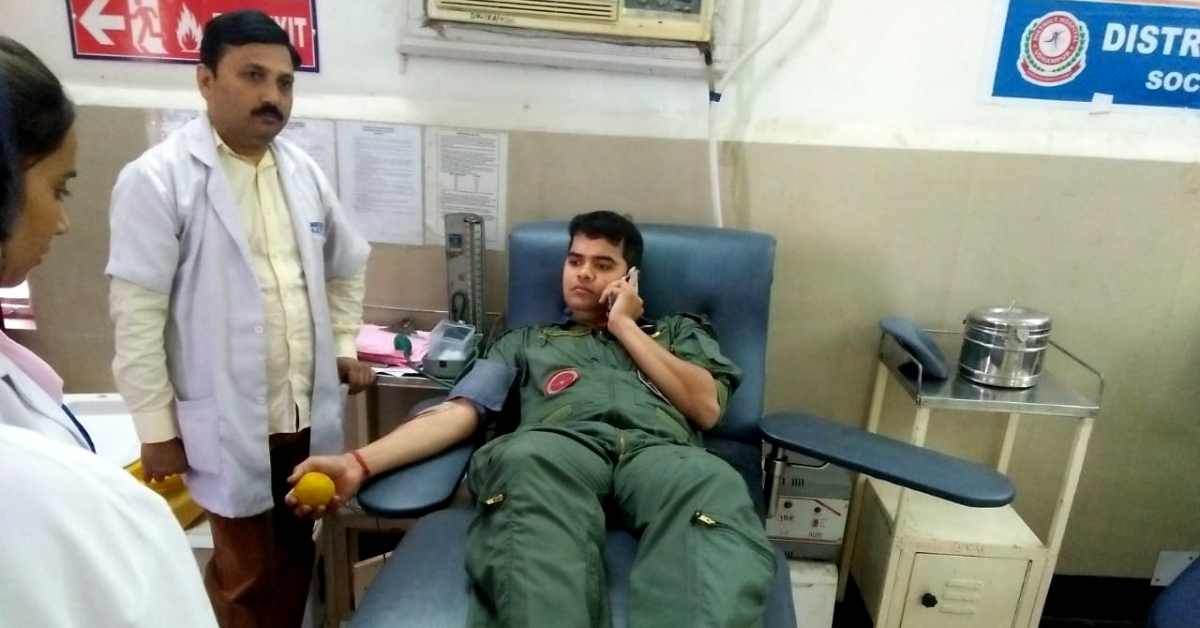 “When I reached the accident site, I saw two individuals stuck in the front of the Maruti van and critically injured. A crowd had gathered at the scene but many people were busy clicking photos and recording videos.”

Aditya Jain, a Major in the Aviation Corps of the Indian Army was on his way to a very important meeting when he saw a crowd gathered on the Udhampur-Jammu Highway.

When he stopped to inquire, he observed the bystanders were either talking among themselves in hushed tones, clicking pictures or making videos. Upon seeing what the people were so buzzed about he immediately sprang into action knowing time was of the essence.

Two men were stuck in the smashed frame of a Maruti Van, which had apparently collided with an oncoming truck. He solicited the help of the gathered crowd and carefully pulled them out.

One of them, who seemed to be more critically injured, was unconscious, while the other man had sustained serious injuries.

Speaking to The Better India (TBI), the Major said,

“When I reached the accident site, I saw two individuals stuck in the front of the Maruti van and critically injured.

I, along with some people, with available resources like sticks and metal bars ensured that the individuals are taken out of the vehicle and sent to the nearest hospital as soon as possible.”

Hailing a vehicle which was passing by, Major Jain sent the critically injured victim to a nearby hospital while he followed with the second victim in his car.

If not for the immediate action by these good samaritans, the victims might have missed out on the crucial ‘golden hour’ and lost their lives. And that is exactly what the Major wants to bring our attention to.

“As I told you, a crowd had gathered at the scene but many people were busy clicking photos and recording videos. I guess there are two reasons why people refuse to help accident victims. One, because their social media presence has become more important than anything else. Why else would they be clicking photos when they could save lives? Second, a lot of people are afraid that the police will tie them up in the official cases and they just don’t want to get into the mess. But that’s what I want to tell you—laws like the Good Samaritan bill are on your side.

Even when I arrived in a civil car, the police did not force my involvement in the case.”

After having admitted the victims in the hospital, Major Jain came to know that one of them had suffered a serious head injury, the other a fracture and both were in immediate need of a blood transfusion. He did not shy away from that duty too.

You may also like: After Losing Son to IAF MiG Crash, Pune Parents Ensure Safety of over 470 Pilots

Duty toward society seems to run in the family as Jain informed TBI that his inspiration comes from his father, Mr Rakesh Jain who was a regular blood donor. In fact, his father has donated blood 113 times!

No disciplinary action was taken against the Major for having missed the meeting when he explained the reason for being late. Today, he also informed TBI that both men have been discharged from the hospital and are recovering.

The army officer is trained to handle emergency situations like these.

It is understandable that you feel scared or incompetent when you witness an accident. If you are not well-versed with first aid then try controlling the crowd and calling for an ambulance.

Also, inform the authorities as quickly as possible as a life is at stake, and it is more precious than the time one has to spend in the police station while your statement gets recorded.

The Better India has covered several inspiring stories of Good Samaritans who put the life of a person first.

For example, Geetha Shankar, a homemaker in Kerala rushed to the rescue of two men who had met with a serious accident. Just like in Jain’s case, Geetha saw a huge crowd gathered at the scene of the accident but no one was taking the necessary action. She stepped up and performed her duty.

You can read the entire story here.

You may also like: A Son’s Tribute to His Army Dad, These Mesmerising Photos Will Blow You Away!

Alok Mehta, another civilian who helped an accident victim, said, “All the procedures—from calling an ambulance to that person being admitted in the hospital with formalities—did not take more than an hour. The police assured me there won’t be any harassment or unnecessary calls and in fact appreciated our actions. I was back at my office desk by 11.15 am.”

Additionally, a group of students in Chennai have developed a first-aid carrying drone and Karnataka has passed the country’s first Good Samaritan Bill. Kerala is on its way to implement it too!

It is indeed a cause for joy that apart from dutiful citizens doing their bit, authorities and innovators too are coming together to make sure that victims suffer less and helpers face minimum issues while saving them.