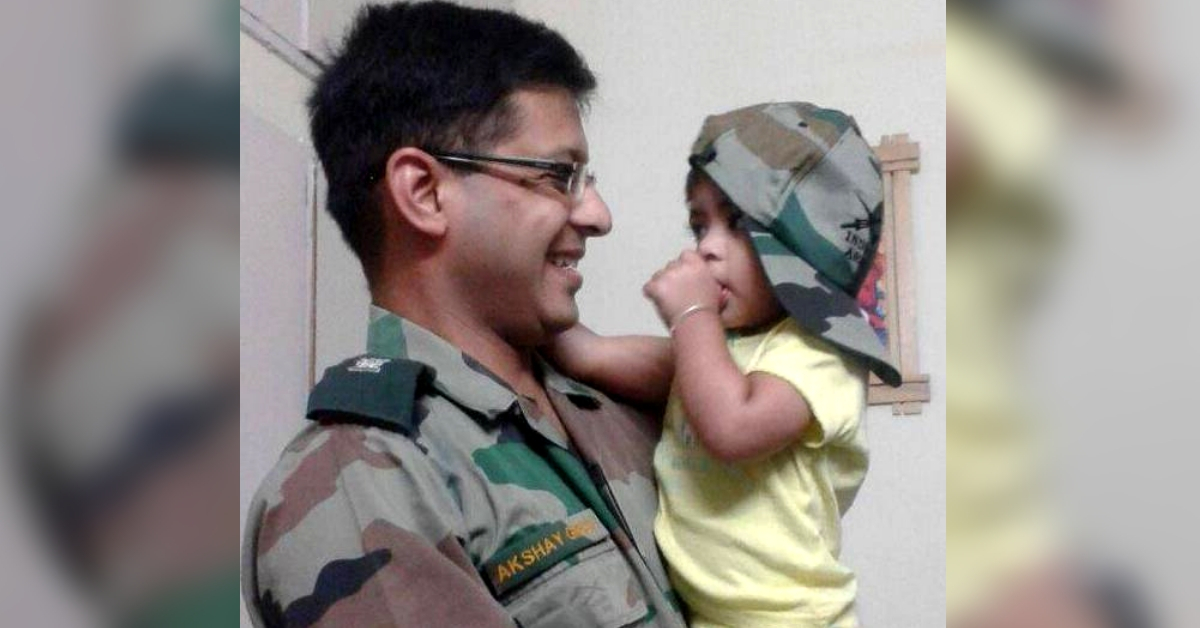 “She smiles yet, her loss cannot be imagined. Her brave papa who once did not leave her hand for a second, had to leave her forever, to save other kids like her from terrorists.”

5-year-old Naina Akshay, the daughter of a martyred Army Major celebrated her birthday on Sunday, and she was joined by thousands of people, mostly strangers, from across Twitter!

Naina’s grandmother shared an old video of her family. In the video, Naina is celebrating her second birthday and her father, Major Akshay Girish can be seeing holding her hand throughout.

“Her brave papa who once did not leave her hand for a second had to leave her forever, to save other kids like her from terrorists,” wrote Meghna Girish, Naina’s grandmother.

Major Girish was killed by terrorists at Nagrota on November 29, 2016. Terrorists had attacked the artillery unit in the area early in the morning that day, and Major Girish was leading the Quick Reaction Team (QRT). Even as he led his team to establish a strong defence to prevent the terrorists from attacking women and children living in the quarters, he was shot at, twice. Major Akshay was martyred when a grenade was launched at him.

She smiles yet, her loss cannot be imagined. Her brave papa who once did not leave her hand for a second, had to leave her forever, to save other kids like her from terrorists. It could have been a massacre in Nagrota. Thank you all for love and blessings to Naina. ? pic.twitter.com/oWHsS2BtDR

Naina studies in a Montessori school while her mother, Sangeeta, is a school teacher. Shortly after it was posted, the video gathered thousands of views and people wished the young one on her birthday.

“Had tears just reading your tweet. I have no words to express my gratitude to the braveheart Akshay. [Please] tell the Angel Her papa was a great man and is looking at her from heaven. May God give you strength to overcome whatever comes [your] way,” said one well-wisher.

Some also expressed their gratitude to the service of Indian army officials like Maj Akshay who protect us civilians.

“We live and breathe because of the incredible patriotism, selflessness and bravery of your son Major Akshay and others like him who gave their lives for our wellbeing and freedoms. Saying thanks however sincerely will never be enough. Thoroughly humbled to read this,” said one such tweet.

Meghna, who wasn’t expecting over 47,000 views and over a thousand retweets for the video told the Times Of India, “That video is very precious to us, where Akshay does not leave Naina’s hand even for a second. Looking at Naina’s loss, I posted that video. He was a wonderful father. I never thought so many would respond.”