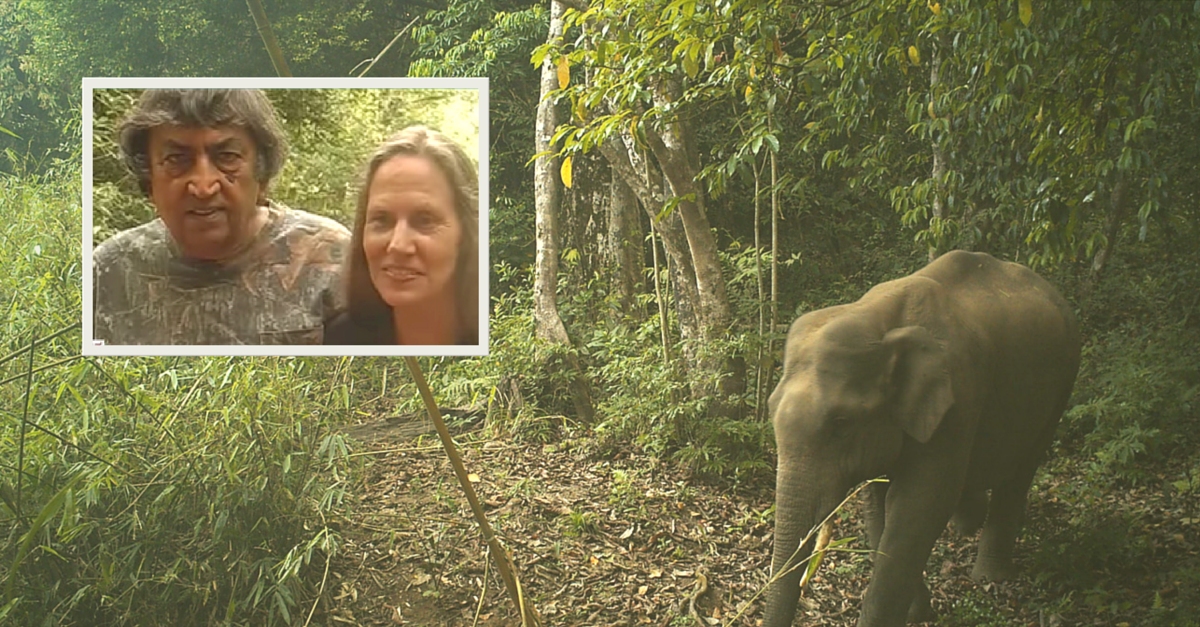 Pamela and Anil Malhotra bought 55 acres of land 23 years ago, and today they have converted it into a beautiful forest of over 300 acres. Here’s how SAI Sanctuary, the only private wildlife sanctuary in India, came to host animals like Bengal Tiger, Sambhar and Asian Elephants.

Wouldn’t it be great to wake up to the sound of chirping birds, with fresh air and splendid scenery around? In the busy lives of our cities when even house sparrows are fast disappearing, this seems like a dream. But a couple has converted this dream into a reality by creating a wildlife sanctuary of their own.

The couple, passionate about wildlife and nature conservation, bought 55 acres of land to plant native trees and protect the environment. Today, they are responsible for creating over 300 acres of wild life sanctuary that hosts animals like Bengal Tigers, Asian Elephants, Hyena, Wild Boar, Leopards, Sambhar, etc.

Dr. A.K. Malhotra and Pamela Malhotra, the NRI duo behind this amazing SAI (Save Animals Initiative) Sanctuary Trust first went to the Himalayas, but as the laws in the Northern part of the country have a land ceiling of 12 acres, they came down South to give shape to their dreams of preservation and protection of nature and wildlife.

“The problem is, we expect the government to do everything. Like-minded people, NGOs and other agencies should purchase land and do their own bit to conserve the wildlife,” says Pamela.

They bought around 55 acres of unused and abandoned land from the farmers who were not using it due to excess of rainfall in Kodagu district of Karnataka. “We chose Kodagu because it is the micro hotspot of bio diversity in the entire planet,” Pamela says.

The passion to expand the green cover grew stronger and they kept buying lands from farmers who weren’t using them. This way the land was used and also farmers got money to repay their debts as the land was anyway lying idle. Gradually the 55 acre forest cover became larger and today covers 300 acres of the land.

There were a lot of native trees that already existed there. The couple decided to retain those and follow three important rules: no chopping down of any tree, no human interference and no poachers.

And with this thought, the efforts to make a wildlife sanctuary started in 1991.

After 23 years, their unmatched passion for wildlife and nature has helped them transform the 55 acres of barren land in 1991 into a one-of-its-kind wildlife sanctuary  spread over 300 acres, probably the only private sanctuary in the country!

The sanctuary also has a beautiful river in the middle that is home to several aquatic species like fishes and snakes, including the King Cobra.

The huge trees and thick forest has also helped several birds like hornbill find their homes. There are over 305 species of birds that visit this sanctuary regularly.

“We make sure that we don’t interfere with these animals. Elephants are very important for regeneration of the forests as they swallow the seed completely without breaking it, unlike other species. Around 30 species of trees totally depend upon elephants for regeneration,” says Pamela.

Several cameras are installed across the sanctuary to identify new animals and keep a track on poachers. “People think that animals need the forest. But the truth is, the forest needs the animals equally. While the forest helps animals in providing shelter and food, animals help forests in regeneration – they are both inter-dependent and we should make efforts to preserve both,” says Dr. Anil.

“A few days ago, I saw in the camera recording that a family of wild dogs and seven small puppies from that family were trying to attack a Sambhar just in front of my house gate. They were born a few days back and now had grown up. So, the fact that each puppy survived is commendable. That means the sanctuary is a good host to all these wild animals,” says Pamela.

You might also like: The Man Who Single Handedly Converted A Washed Out Land Into A 1,360 Acre Forest

When the Malhotra couple purchased the land, there were already native species of cardamom and other trees that were planted. They decided not to disturb those and planted more native trees around the existing ones.

As the green cover expanded, the animal and bird species increased too. The flora of this sanctuary includes hundreds of varieties of indigenous trees, many of which are of medicinal value.

“Our aim is to preserve the flora and fauna, especially the rainforests, for the future generation. We believe that when we die we should give back the same (if not better) Earth which we got from our ancestors to the next generation,” says Dr. Anil.

The duo makes sure that they do not interfere or disturb the existing eco-system. “Even the dead wood provides nutrition to the soil,” says Pamela.

The couple has grown 10-12 acres of coffee and around 15 acres of cardamom on the land. They are also involved in organic farming on the same land. The sanctuary, which offers a unique experience to the visitors, runs completely on solar and alternate energy. For days of heavy rainfall in the monsoon, the three small windmills meet the needs of providing enough electricity to the sanctuary.

“We also make sure that people who visit here are responsible tourists. We only take those people who are actually interested in exploring the beauty of nature. Smoking and drinking is not allowed as it disturbs the animals and the overall air which is so pure,” says Pamela.

Related Read:  Aravali Institute of Management: The Story Of Breathing Life Into A Barren Land

When Malhotra couple started this sanctuary, they invested their own money. Now they are a registered not-for-profit trust which runs on donations which get tax exemptions.

Apart from funds, another challenge comes while patrolling the sanctuary. As the area is very large it is hard to keep track of the poachers. To counter this, they spread awareness about preserving wildlife and nature in schools and nearby villages.

“To avoid any mishap, we don’t allow people to walk alone here. There is always a guide or we accompany the visitors ourselves,” says Pamela.

The sanctuary also won the “Wildlife and Tourism Initiative Of The Year” award by Sanctuary Asia in conjunction with Tour Operators for Tigers in 2014.

In conclusion, Pamela has a thought she’d like to leave us with, “Overcome your fear and respect the animals’ power. The animal might not understand our words but they do understand our feelings.”

Pamela and Anil also advice people to be careful about the lifestyle they follow. Eating organic food, recycling things, using more energy-efficient devices are some of the basic things they advise everyone to follow.

You’ll surely like: The Man Who Has Created 33 Forests In India – He Can Help You Make One In Your Backyard Too!

“When I carried buckets of water in the Himalayas, I realized how precious it is. We should not waste it. It is only when we face problems we realize importance of things,” she says.

“For anyone who wants to bring a change, we advise them to set one single goal and believe that they can achieve it,” says the couple.

Watch the official trailer of a documentary on SAI Sanctuary being made by filmmaker Mellissa Lesh here:

This is an appeal that Pamela and Anil Malhotra have made to all wealthy Indians to save our forests, wildlife and fresh water sources. They are even willing to help anyone who is willing to try.