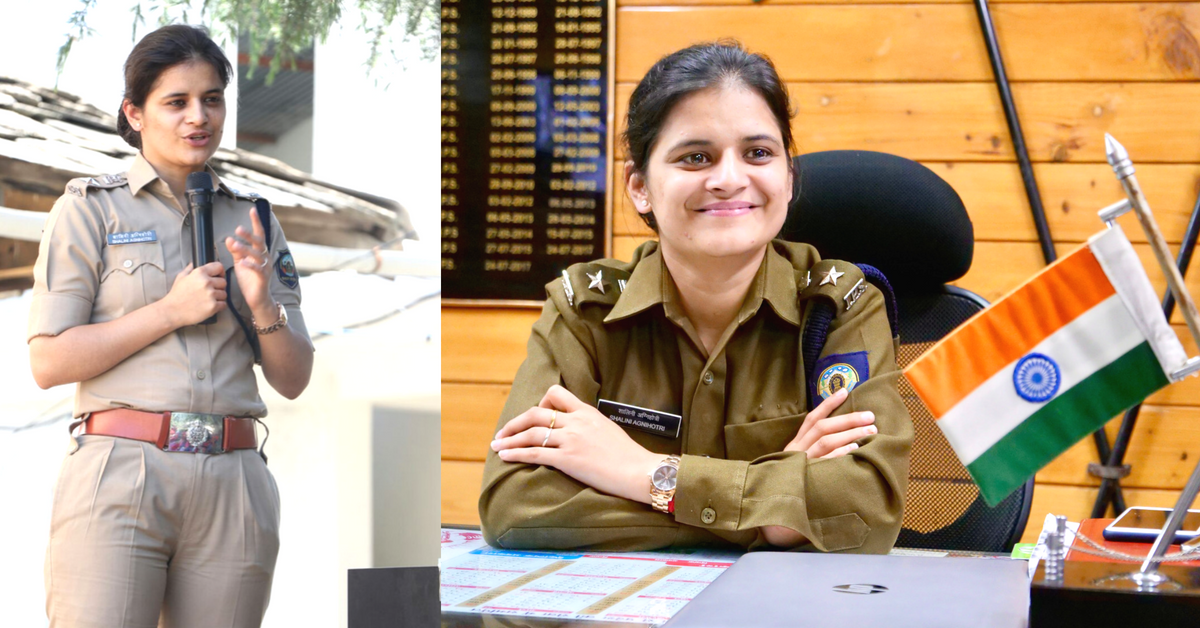 As a child, Shalini had no idea who or what a DC was, but registered that a DC is a powerful person whose word people adhered to. At that moment, she decided that she wanted to become one.

Inspiration can be ignited by something as fleeting as a random comment. 29-year-old IPS officer Shalini Agnihotri’s dream to join the civil services began when she was jolted by one such comment by a stranger on a bus. Her story is inspiring and worthy of being told because of the manner in which she persevered and reached her goal.

While travelling with her mother on a bus, a man standing beside them was holding the headrest of the seat where she and her mother were seated. Despite repeated requests to remove his hand, the man did not oblige. He ultimately asked Shalini’s mother if she were the DC, whose word he had to obey.

As a child, Shalini had no idea who or what a DC was, but registered that a DC is a powerful person whose word people adhered to. At that moment, she decided that she wanted to become one.

In this exclusive conversation with The Better India, Shalini speaks about her journey, her aspirations, life at the academy, and how she made her dreams come true.

The daughter of a bus conductor

Born on January 14, 1989, in Thathal village of Una district, Himachal Pradesh, Shalini found immense support in her parents, Ramesh and Shubhlata Agnihotri. Her father was a bus conductor and her mother, a home-maker. Shalini was always a very diligent student and scored very well in all her examinations.

After studying at the DAV School, Dharmshala, she secured admission at the prestigious Himachal Pradesh Agriculture University, Palampur, from where she completed her graduation in Agriculture.

“The region I was born into is considered to be a rather backward area in the district. Despite all that, I am rather proud of how my siblings and I managed our lives. My elder sister is a dental surgeon, and my younger brother is commissioned as a Lieutenant in the Indian Army,” she says.

Speaking about her parents, she says, “They came from backgrounds of very little formal education but were keen that the three of us had a good education. No one on either side of my family or even relatives was in the services, and hence, there were times when my dreams seemed very far-fetched,” she says.

What kept Shalini going was the unflinching support from her parents.

“Without having to think, I can say that my parents have been my biggest strength. They made me believe that a good education has the potential to change everything. In 2004, I had scored 92.2% in my class ten examinations, and that was a big deal back then. However, in my class 12 examinations, I only scored 77% and was devastated by the results. My parents, on the other hand, stood firm in their belief that I would do well in life. That trust they placed in me meant the world to me,” she says.

Shalini speaks about how her parents would politely tell relatives to stop treating her with sympathy; they allowed Shalini the time she needed to find strength and heal.

She continues, “It was because of the way they treated me after my bad results that I was able to do so well in college. I went on to top not only the college but also the university. While I was content pursuing a basic degree after the bad results in class 12, my parents insisted that I enrol for a professional degree.”

With every failure, Shalini’s parents stood by her and helped her do better.

One other reason why this is extraordinary is that the society that Shalini belongs to is not so encouraging of girls. None of her female cousins had been given these opportunities, and most of them had been married off at rather early ages.

“If I had to describe my upbringing, then I have to say it was a middle-class household. We never owned a vehicle, the house that we owned was half done, and even that was mortgaged to fund my sister’s education; my mother stitched clothes at home to make some extra money, and we never bought anything extravagant, ever.”

“In all my growing up years, I never saw my parents indulge in anything that they might have wanted for themselves.”

“These are truly the sacrifices which I wanted to do something meaningful for,” she says.

“What I learnt from my parents was the importance of integrity and honesty,” she says.

Preparing for UPSC under wraps?

The fact that Shalini was preparing for the UPSC examination was not known to her family. The exam is known to be tough, and many aspirants take time off to prepare for it and yet Shalini did not mention this to anyone.

“I am thankful to free Internet. I would spend hours online, reading, researching, and just trying to understand how the exam works. Like most aspirants, I would also devour all the newspapers, magazines, and other online sources of information,” she says.

Speaking about the first time she and her father entered the training academy at Mussorie, she says, “We both stood there completely mesmerised by the grandeur of the building before us. There was a different aura to the place.”

“I would be right in saying that similar emotions were running through both our minds: anxiety, happiness, nervousness, about what was in store and just excited to finally be there.”

She speaks of the pride she saw on her father’s face and says that she would cherish that feeling all her life. “One of our faculty members at the academy addressed my father as ‘sir’ and invited him to the Officers Mess for a meal. At that moment, everything felt right,” she tells me, with pride.

Shalini has a long list of awards and accolades to her credit. She was adjudged to be the best all-rounder trainee of the 65th batch of IPS.

Besides this, she also won the Prime Minister’s Baton and the Home Ministry’s Revolver for being the best trainee.

Life as Superintendent of Police

Shalini was first posted in Shimla as the Assistant Superintendent of Police and says that the learnings over the last four years had been immense.

“Two rather crucial and high profile cases I got to work on involved the rape and murder of an eight-year-old blind girl and another murder case in Shimla. We were able to solve both the cases and the convicted were sentenced to rigorous imprisonment as well,” she says.

Outcomes like these only strengthen her belief in wearing the Khaki uniform and serving the people, she says.

Shalini is now posted as the Superintendent of Police in Kullu district, Himachal Pradesh.

As we end our conversation, she says, “All dreams are achievable, no matter where you come from and what your background is. Just find out what you want to be and work to make it possible.”

Shalini’s story is a testament that there are no roadblocks to achieving one’s dreams; perseverance and focus can make one overcome any challenge.