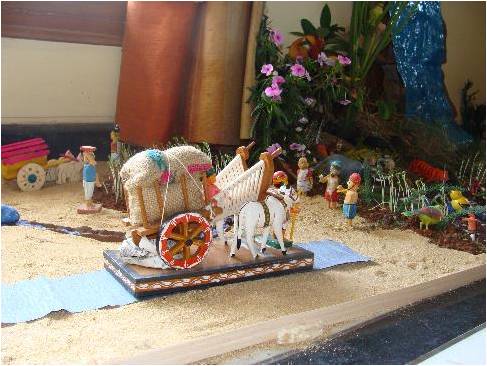 Golu – the unique festival of dolls. As the festive days give us yet another chance to celebrate and visit friends and family, here is how a family in Bangalore gave a personal twist to the “Golu” festival to teach their three-year-old daughter the importance of nature. From explaining the five elements of nature to making wonderful clay models, this family knows how to make learning more fun. Tell us how you celebrated the festivals of Navratri and Dussehra in your own way this year.

Aren’t festivals just fascinating? More than all the frolic and fun, it is the stories behind these festivals that never fail to amuse and entertain us.

In a colourful country like India, we never run out of reasons to celebrate. As we approach another frenzy festive season and get ready for Id, Diwali, Christmas and New Year, let’s spare a moment for an interesting and fun festival Golu – the festival of dolls.

Every geographical region in India has its own traditions and customs. Golu, also known as Kolu, Bombe Habba (Kannada), Bomma Gullu (Malayalam), Bommai Kolu (Tamil) or Bommala Koluvu (Telugu), is a toy festival celebrated during the time of Navratri in Southern India.

As a ritual, various dolls are exhibited by people on stairs in odd numbers (7, 9 or 11). These dolls are decorated and adorned for nine days, and on the tenth day, i.e., Vijayadashmi, one doll is symbolically put to sleep while others are packed up for the next year.

As per the traditions, the first dolls to adorn the Golu should be “Marappacchi”, a pair of male and a female dolls. In earlier days it was done to make adolescents aware of gender morphology.

There are many stories about the origin of Golu. One of them has a significant connection with agriculture. It is said that in order to encourage de-silting of irrigation canals, Golu was celebrated to create demand for clay materials. Golu is symbolic of the feminine power and symbolizes that everything on earth has one creator.

Another mythological story behind this festival is that when Durga wanted to kill an evil demon Mahishasur but didn’t have enough strength to do it by herself, she asked all Gods and Goddesses to transfer their strength to her. They all did that and stood still as statues. This festival is celebrated to acknowledge their sacrifice.

Another reason to celebrate the festival in the olden days was to give women a chance to go out and mingle with the neighbours. The women exchanged Kumkum, sweets, fruits, flowers, bangles, etc. “In earlier times, women wouldn’t go out much. So this festival would give them an opportunity to meet others and go out of the house for some time,” says Bangalore-based Namratha, who gives her personal touch to the festival every year.

What makes her Golu special is the unique theme that she follows every year. She started celebrating this festival three years ago when her daughter Stuti was born.

“We wanted her to understand the value of traditions from childhood. At the same time, we wanted to do something that could be helpful in her learning process. Hence we started giving a different theme to the festival each year,” says Namratha.

This year, they felt she was old enough to learn about nature and all the five elements. The idea was to show what an integral part nature plays in everyone’s life. So, Namratha thought to depict the five elements of nature – earth, water, fire, air and sky in her Golu.

Finally, the sky. “Imagine if the Sun refused to rise in the morning because we haven’t paid the bill? Or the moon refuses to shine because he doesn’t have enough incentive to spread his moon light! The idea was to educate that these elements are very important for each one of us and we should value them,” Namratha says.

Namratha’s unique Golu has attracted many young guests. They wonder and discuss as they see the amazing models. Stuti proudly invites everyone to her house and explains in detail what each element means.

“With so much of a dependence on nature, imagine what will happen to us if these elements were to become unbalanced? We are already experiencing various incidents of nature’s fury. It is high time we started respecting nature. We need to teach the next generation how to do this because they will be the most affected by all our wrongdoings. And practical education is far more effective than books,” Namratha says.

As Namratha’s family is celebrating in their own style, what is your idea of a Golu? Share amazing stories and pictures of your Golu and let the world know how awesome this festival is!