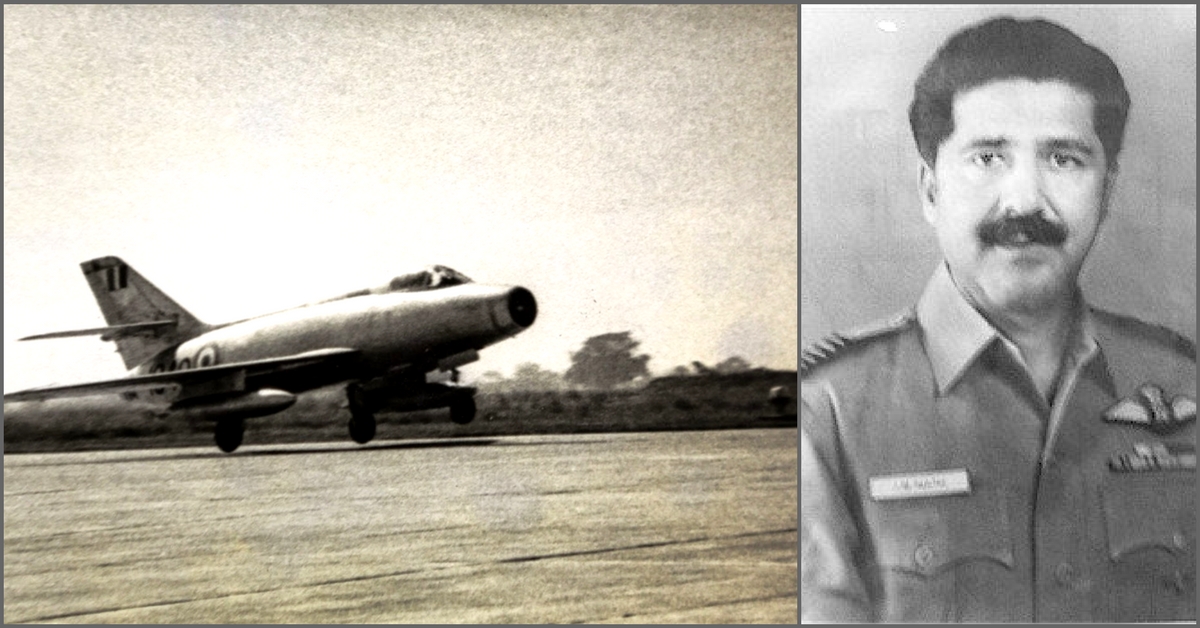 Here’s the little-known story of Jag Mohan Nath, the IAF veteran who holds the rare distinction of being awarded two Maha Vir Chakras.

Nearly fifty-three years ago, when he leaped into his bomber jet and flew into Pakistan on a top-secret mission, then Squadron Leader Jag Mohan Nath already had a Maha Vir Chakra awarded to him.Three years later, in September 1965, the gutsy IAF pilot was awarded another Maha Vir Chakra!

Awarded for outstanding acts of gallantry, Maha Vir Chakra is the second highest military decoration in India, after the Param Vir Chakra.

Here’s the little-known story of Jag Mohan Nath, the IAF veteran who holds the rare distinction of being awarded two Maha Vir Chakras.

Jam Mohan Nath was born in Laya village in Punjab province of British India (now in Pakistan) and relocated to India after Partition. His family members were all doctors, but the young lad had a passion for planes from an early age. Growing up in his village, he would spend hours watching the planes high in the sky.

Nath got an opportunity to follow this passion in 1948 when he joined the Air Force Administrative College in Coimbatore for his initial training in the IAF. Dedicated and hard-working, he was soon selected for daring maneuvers and covert operations in hostile territory.

His tryst with history would begin a few years later with the 1962 debacle on the China border.

Beginning on began on October 20, 1962, the conflict saw a month-long standoff between approximately 10,000-20,000 Indian troops and 80,000 Chinese troops. Fought mainly by the Indian Army, India’s air power was sparingly used to support the ground troops as the government was wary of Chinese retaliation against Indian cities, especially Calcutta.

It was during the beginning of this stand-off that Nath was given the risky task of covertly assessing the Chinese build-up in the Aksai Chin area and Tibet. He took to skies in his Canberra, a twin-engine jet bomber that had been fitted with cameras.

During his reconnaissance missions, Nath was often detected and fired at by the Chinese despite flying high to avoid radar detection.

“I was falling slow at almost stall speed. The Chinese could see me clearly and even fired at my aircraft,” Nath would later tell Daily Mail in 2014.

Undaunted, the courageous pilot continued to fly into hostile territory and return with invaluable strategic inputs on the ground situation and enemy troop activities in Aksai Chin and Tibet, both before and during the Indo-China conflict.

It was this outstanding effort of flying in hazardous conditions that earned Nath his first Maha Vir Chakra. Three years later, he repeated the feat in 1965 after war erupted between India and Pakistan.

Back then, the Himalayan battlefield had no radar. As such, the Pakistan Air Force (PAF) had set up observation posts pitched atop ridges of the mountainous terrain. Pakistani Sabres would also patrol the skies to lookout for Indian intrusion.

You May Like: The Untold Story of a Legendary Band of Men Who Laid the Foundation for the Indian Air Force

During his recon sorties in enemy territory, Nath would fly his English Electra Canberra at extremely low heights, almost skimming the trees so that Pakistani radar could not detect his aircraft. Then, when he caught sight of something that needed to be captured on camera, he would climb (in broad daylight) to 12,000 feet to get clear pictures of well-defended airfields and installations.

This five-minute period of exposure was the riskiest part of the mission. Easily visible to Pakistani outposts and aircraft, Nath would often have to dodge and duck between the peaks at dizzying speeds to avoid being shot down by the furious PAF Sabres in hot pursuit.

Unsurprisingly, he had several close calls, such as the time when he found his fuel gauge running empty just as blips on his instrument panel informed him about four enemy aircrafts on his tail. Yet, undeterred by the danger such incidents posed to his life, Nath soldiered on, continuing to fly into an extremely hostile enemy territory to complete the vital task he had been given.

In fact, Nath once evaded Pakistani fighters and re-entered Indian skies in such a way that he was almost shot down by IAF MiGs who mistook him for the enemy!

The 30-odd recon sorties conducted by Nath yielded a treasure trove of strategic pictures and information. It was this crucial intelligence that helped IAF aircrafts destroy a powerful radar in Badin (near Karachi), and that the Indian army almost reached Lahore.

Interestingly, Nath’s dangerous missions were so secret that only one other person had the authorization to known about them: the then Chief of IAF, Air Chief Marshal Arjan Singh. Singh had also given Nath the codename of ‘Professor’ to maintain these high levels of secrecy.

The pilot’s top secrets assignments also ensured that he witnessed decisions being taken by the three Defence chiefs, senior bureaucrats, and political leaders. Yet what left a lasting impression on him was the incredible bravery under fire that his fellow soldiers displayed, many of whom lost their lives on the battlefield.

In 1969, Nath retired from the Indian Air Force and joined Air India as a commercial pilot. He remains the only living IAF veteran to be conferred the Maha Vir Chakra twice, a distinction that is as rare as it gets.