5 Times Residents Did Not Wait for the Railways, but Built Their Own Station! The villagers have been running the station for 8 years now and take care of every aspect, including cleanliness and fines.

Indian Railways (IR), the lifeline of India, has the distinction of being the second largest railway system in Asia and the fourth largest railway system in the world. The total number of railway stations in India was estimated to be 7,216 at the end of 2015-16. While Indian railway stations play an essential role in the lives of people, the expenditure that goes into the maintenance of these stations is so huge that there is a separate budget for it.

In such a scenario, imagine how difficult it would be for a small village or town to ask for a railway station of its own. However, we Indians are well-known to make the impossible, possible. Today we bring you the stories of 5 such railway stations which were built by the villagers on their own.

January 5, 2010, was a proud day for the residents of Taj Nagar in Gurgaon, Haryana when for the very first time, a train stopped at the small village. Their pride was heightened by the fact that the railway station was built entirely by them.

The villagers of Taj Nagar wanted a railway station of their own. When their demand was not met for over 25 years, the villagers put together an amount of ₹ 21 lakh and built a railway station on their own. They contacted the IR with an official request to begin halting passenger trains at the stations, and the IR accepted their request. Today, Taj Nagar is an official station, with its own station code and as busy as many other stations on that route. Rashidpura Khori, a small village station on Sikar-Laxmangarh narrow gauge of North Western Railway is one of its kind. The station is run and operated by the villagers.

The station was declared to be closed by the Jaipur division of NWR zone of Indian railways in 2005 due to the poor income it was generating. Unfortunately, this decision wound up affecting about 20,000 people (including the ones living in villages near Rashidpura Khori). The villagers wrote to the railways and met various officials but to no avail.

In 2009, the railways agreed to reopen the station, but they had a condition, which was that the sale of tickets should be worth ₹ 3 lakh. The villagers came up with several ingenious ideas to fulfil the terms — including purchasing multiple tickets for one journey. They raised money amongst themselves to save the station and succeeded in their efforts.

The villagers have been running the station for 8 years now and take care of every aspect, including cleanliness and fines. The Balwantpura Chelasi railway station in Shekhawati village stands as a proof of the determination and hard work of the villagers. After making several unsuccessful requests to the IR, the residents of four villages in Jhunjhunu district, Rajasthan decided to take matters into their own hands. Located at a distance of 160 km from Jaipur, the station was built in 2003, at the cost of ₹ 8 lakh with donations from the villagers themselves. It has a well-maintained platform, four benches, drinking water, and a ticket counter.

Once it was built, the railways agreed to make four trains under the North-Western line which travel to places like Sikar, Rewari, and Jaipur, halt here. Bajrang Lal, who is a resident of one of the villages, and a former employee of IR, manages the station and the traffic through it. As the station does not have booking staff yet, the train’s guard issues the tickets.

The station at Lakhan Majra provides rail connectivity to 9 villages — Bahasi, Kherak, Gugaheri, Nandakheri, Chiri, Poli, Indergarh and Lakhan Majra — on the Delhi-Bathinda rail route. At least six passenger trains halt there for a minute each on their way to and from Delhi.

For several years, the residents of these 9 villages had to travel a distance of 14 km on bad roads to board a train at Karaichi station near Jind, to reach New Delhi. Time and again, they lobbied for a station of their own, but the requests did not materialise. One day they came together with bricks and mortar, hoes and spades, to gift themselves the Lakhan Majra railway station. Eventually, the railway authorities granted approval for provision of a halt station at Lakhan Majra in April 2012. 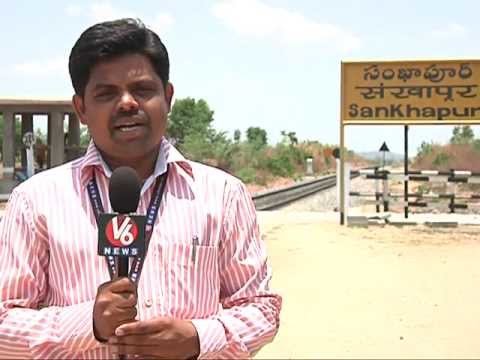 The villagers of Sankhapur and Khajapur of Chinnashankarampet Mandal used to walk 6 km on the dusty road to reach NH 7 if they had to go either to Nizamabad or Hyderabad. This was because the villages lacked a station and the two trains — 593 Nanded and 573 Bodhan — could not halt there while making trips up and down the track.

The villagers waited for 25 long years for the railways to take note of their plight and provide a halt so that the farmers could transport their agricultural produce. In 2008, Tegalla Babu, the Sarpanch of Khajapur, made efforts to build a station to force the authorities to consider their request. With his untimely death, his wife Bujji who became the next Sarpanch started working on the project. The residents of both the villages provided her with financial support, and within six months, they strengthened the banks of the track and completed the platform. Along with it, a booking office-cum-waiting room was built with the money provided by Mansoor Ahmad, a local philanthropist. While the construction was going on, correspondence with the railway authorities was re-established, and they finally agreed to a halt at Sankhapur.