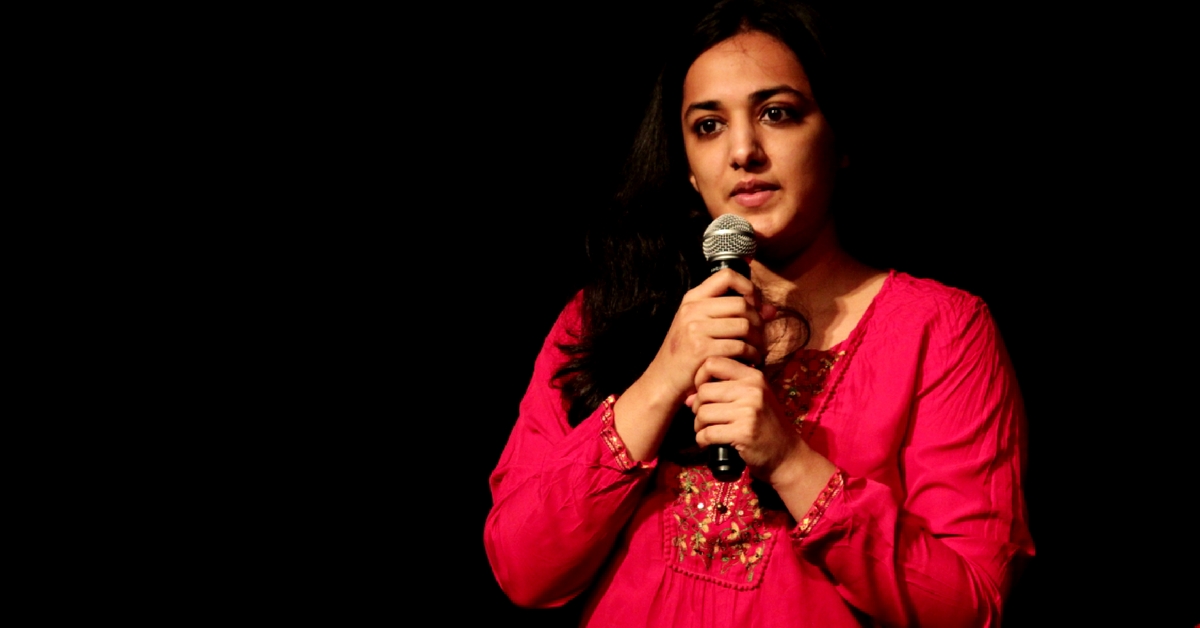 A trait often looked down as a disability, Pooja Vijay channels her stammer towards standup comedy and slays it with an impeccable sense of humour.

Have you ever met a comedian who stutters? Not mimicking any character but one who really stutters?

If you are going to mention a certain beverage commercial that featured a standup comedian who stuttered, brace yourself for the big reveal.

It indeed was an act, no kidding.

Taking the ‘an’ off the word comedian and replacing it with ‘enne’, meet Pooja Vijay, perhaps the only comedienne in the country who would crack you up with jokes that tend to focus on her own stammer.

The-27-year old channels her stutter, a trait that is often looked down as a disability, towards standup comedy like a Boss and slays it with an impeccable sense of humour.

“At times, people have appreciated my performance, thinking it was all an act”, says Pooja.

During one of the performances

Never thinking of her speech disability as a shortcoming, she says it must be because of the endless support of her family and friends. “There have been instances where people have made fun of my stammer, but I’ve never taken it too seriously to let that rub into my stride”, she remarks.

Pooja, who currently lives in Delhi, is from Tamil Nadu and has lived much years of her life in Bengaluru. It was in the Garden City that her tryst with comedy started in 2015 with an open-mic performance, after watching one of her friends pull off a gig.

“Though in the spur of a moment, I had picked up the mic and was quite sure it’d probably be the last time as well. Apparently, the gig managed to make people laugh and many well known comedians actually appreciated my act!” Pooja reminisces.

Two years down the line, Pooja has performed in major cities around the country and has been collaborated with established comedians like Rajneesh Kapoor for the opening act to such performances.

On being a source of inspiration to those who remain unsure and cocooned, still guided by their disability, she admits that many people have approached and congratulated her for being brave post performances.

As of her stutter, Pooja admits about finding people being confused as she goes on with her jokes, high on stuttering. “To break the ice and make the audience comfortable enough to laugh without any underlying sense of judgement, a major chunk of the time slot that I’ve been allotted involves jokes on myself and my stutter”, she adds.

You may also like: The Recipe for Humour: Kenny Sebastian on Comedy, Filmmaking, Childhood Memories and More

Pooja also shared an awe-inspiring instance of being featured by the Stuttering Foundation, a US-based non-profit organisation, that provides free online resources, services and support to stutterers and their families. The organisation also supports research into the causes of stuttering. Soon enough, Nina G, a renowned American stuttering comic, who happens to be one of her inspirations to taking up comedy, reached out to her!

In an arena still quite outnumbered by men, Pooja has made quite a mark for herself. Emerging as a source of motivation for not just those who stammer, her story should inspire everyone who let their disability bind them down.

With a show next lined up in Hyderabad, we hope Pooja continues to shine on with her self-anointed stammer jokes!

To get in touch with Pooja Vijay, click here.