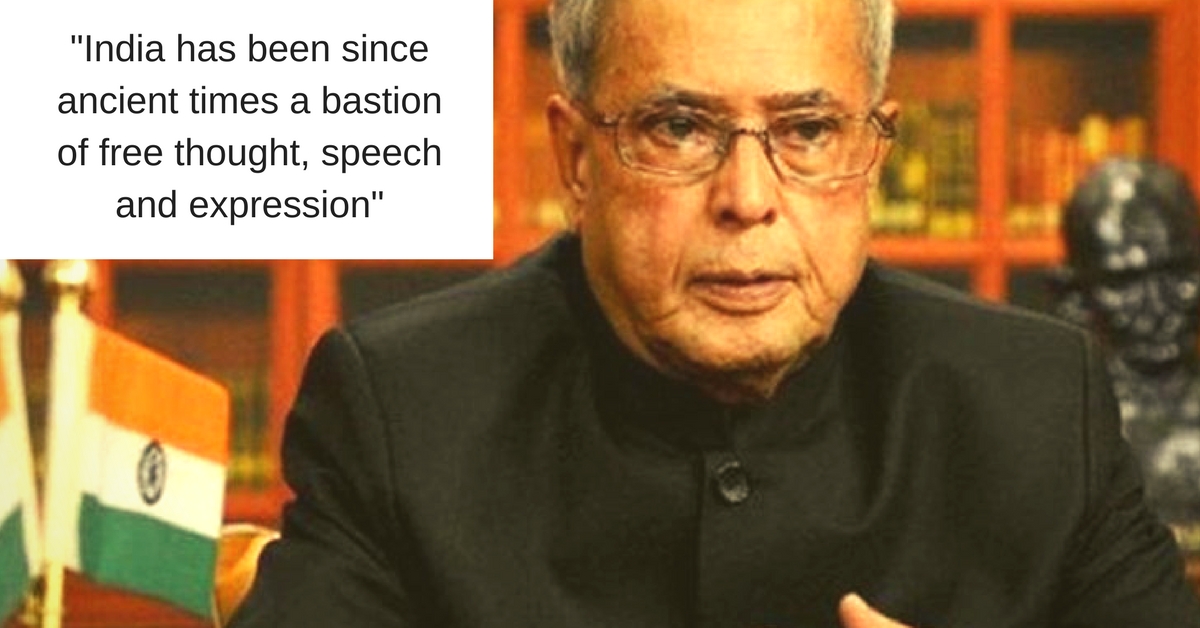 Intolerance is not welcome in India.

As debates surrounding the importance of freedom of speech and expression continue to heat up in the country, the President of India, Dr Pranab Mukherjee, has thrown his weight behind the champions of free speech.

The president’s statement comes a week after violence erupted in Delhi’s Ramjas college when a seminar was cancelled. With students from Delhi University taking to the streets in widespread protests, Mukherjee, speaking at an event in Kochi, spoke on nationalism. He said, “There should be no room in India for the intolerant Indian. India has been since ancient times a bastion of free thought, speech and expression.”

Furthermore, his statement becomes even more prescient as one of the student protesters, 20-year-old Gurmehar Kaur, has been in the news for having gotten thousands of rape and death threats on social media from people who disagreed with her views.

During his freewheeling speech, Mukherjee also emphasised on the importance of making the safety of women and children a top priority for the nation.

Mukherjee, however, has also cautioned universities to refrain from becoming hotbeds for unrest in the nation, noting: “Those in universities must engage in reasoned discussion and debate rather than propagate a culture of unrest. It is tragic to see them caught in the vortex of violence and disquiet.”

You may also like: Hang out With Lincoln and Mukherjee at Rashtrapati Bhavan’s Mughal Gardens

The phrase “anti-national” has permeated the national conscious in the last few years with many prominent personalities and politicians weighing in on it over time.

In 2016, the Supreme Court made a strong statement noting that people cannot be slapped with cases of sedition or defamation for criticising the Indian government. A bench of Justices Dipak Misra and UU Lalit said, “Someone making a statement to criticise the government does not invoke an offence under sedition or defamation law. We have made it clear that invoking of section 124 (A) of IPC (sedition) requires certain guidelines to be followed as per the earlier judgement of the apex court.”

While thousands continue to voice their opinions on this matter through various platforms, for now, the President of the country has spoken.