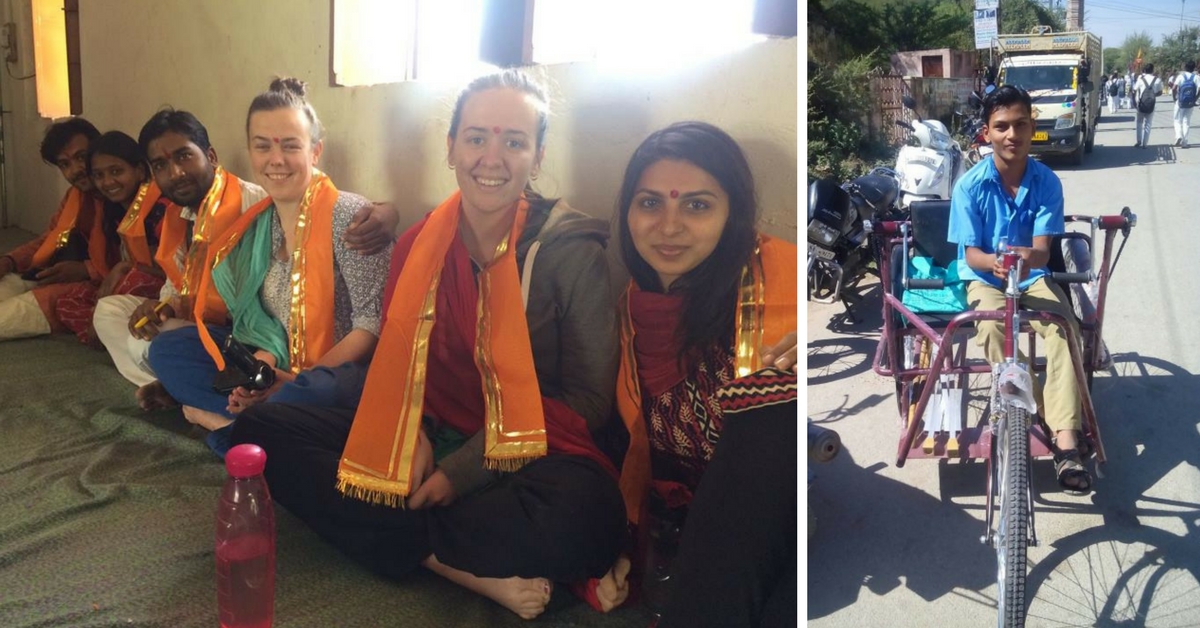 When communities join together for social improvement and change, they can overcome even the most difficult of odds. Rupal Hariyaow talks about how a youth club in a village in Rajasthan banded together to get a disabled member assistance he desperately needed.

February 7, 2017, a typical Thursday evening, turned into something extraordinary for our whole team of Pravah ICS, when a WhatsApp message from Sadri, saying, “Naresh got his tricycle today!” flashed on our phone screens. This five-letter sentence narrated to us a story that was enough to move us all to tears of immense joy and pride, stirring so many inexplicable emotions within our hearts, all at the same time.

Naresh, a 16-year-old teen who holds many dreams in his eyes, was born with a disability in his legs, and was not able to stand on his own for many years. This, however, did not stop him from trying, and with the help of a few villagers who would tie bricks and stones to his legs for support, Naresh gradually started walking with the help of sticks on his own.

Naresh, a Class IX student, is a member of Sadri Youth Club, a club that was formed by our team in Sadri, Rajasthan during our Pravah ICS journey of 12 weeks. This journey has given so much to each and every one of us, and even thought it’s been almost a month since it ended, we are still receiving gifts.

Naresh getting his tricycle and new crutches is one of those gifts for us.

Ever since word spread of a Youth Club being formed by us in Sadri, Naresh wanted to be a part of it. He asked us several times, “When is it going to happen, when is the Youth Club going to start?” Unsurprisingly, Naresh came almost every Sunday to the Youth Club sessions, even though they were held in Sadri Panchayat, situated on the outskirts of the village. Though it was hard and tiring for him to cover such a long distance with the help of his sticks, he never complained.

After a session on “Ownership of your issues and village”, a grim-looking young fellow called Vishnu, another Youth Club member, came up to us and talked about Naresh’s problem, and how it would be very helpful if he got a wheelchair. We were taken aback to see him so concerned about Naresh, and his will to find a solution. At the same time, it got us thinking about how inaccessible our places are for people who are physically challenged. We wondered why we didn’t think about it. Maybe, in our tenacity to make him feel included, we became ignorant to the existence of the problem itself, and hence never thought of a solution.

But, now we felt determined. We talked to the Jatan team, and they gladly sent facilitators to the next Youth Club meeting, where Naresh’s issue became the topic of an hour-long discussion. The Jatan facilitators suggested making a petition for Naresh’s tricycle, getting it signed by every Youth Club member, forwarding it to the concerned authority, and asking for immediate action on it. Some members were unsure about making a petition to Naresh’s school, as their previous approaches had been in vain. But they still agreed.

The Jatan team helped us with the subject matter of the petition, and our team member Sruthi Venugopal wrote it. We then circulated the petition and all the members of the club signed it. Even though we were all very happy about it, we were also a little concerned.

We were leaving Sadri, and didn’t know if this action would fetch any result, or go in vain.

This time, however, it was different. The youth understood the importance of taking ownership, and took it very seriously even after we left. They contacted a doctor in Kankrauli Hospital and told him everything. They asked him about the date of the government camp for aid to physically challenged people, and registered their name. Now, that list had one more name – Naresh.

That fortunate day came when the doctor called Naresh’s school principal and asked him to communicate the date—February 7. A few Youth Club members, along with Naresh, left for the camp early in the morning. They stayed there till the evening, until they got the tricycle and crutches. They also brought back a hearing aid machine for Khushi, a little deaf-and-mute girl in the village. Khushi can hear now, thanks to the Sadri Youth Club members.

Vishnu confessed that he had wanted to get Naresh a tricycle since he saw one in a hospital. As for Naresh, he is all giggles and smiles after getting his new trike, and has been thanking his friends.

Seeing their determination and efforts, and love and support for each other, still overwhelms all of us. This incident has shown us what happens when we come together for each other. The youth of Sadri taught us a lot of lessons unknowingly, and we are very proud of them all. They gave us a lot of hope with what they did, and made our typical Thursday evening anything but typical.

(The author was a volunteer with Pravah ICS (batch October – January 2017), in the village Sadri, Rajasthan.)

To venture on the exciting volunteering journey of Pravah ICS yourself, fill out the application form here.