TBI Blogs: Demonetisation Meant Many Changes for India’s Visually Impaired. Here’s How It Can Be Inclusive.

There’s a need to prevent visually-impaired citizens from being financially excluded from the new digital Indian economy emerging after demonetisation. George Abraham takes a look at the steps that can be taken to make cashless India inclusive for all.

There’s a need to prevent visually-impaired citizens from being financially excluded from the new digital Indian economy emerging after demonetisation. George Abraham takes a look at the steps that can be taken to make cashless India inclusive for all.

Most people are delighted that black money will be wiped out, terrorism will be brought under control, corruption will be eliminated, and the tax net will be widened. These were the promises and hopes that were shared by the Honorable Prime Minister when he announced the Government’s decision to demonetize 500 and 1000 rupee notes last November. The country happily took the announcement in its stride and was prepared to put up with the inconvenience of standing in long queues, limited withdrawals, and shifting to plastic and digital modes of transaction. Yes, the people of India were totally behind the Prime Minister.

While the move can be termed as a visionary and bold initiative to clean up the economy, one must examine the impact of this move on the marginalized, especially the visually-impaired citizens of the country. Government statistics say that there are around 5.4 million visually-impaired people in the country. This figure, however, is much higher according to WHO and activist groups.

Some people might ask, “Why so much fuss over including blind and visually-impaired people when the government is moving forward with path-breaking initiatives like Digital India, Skill India, Smart Cities, and Demonetization? Why all the noise about accessibility? Anyway the blind population needs to be provided for and looked after.”

Pankaj Sinha, Santosh Rungta, and Kanchan Pamnani are successful advocates practicing in various courts of the country. Garimella Subramanium and L. Subramani are active journalists with leading publications. Sanjay Dang, Preeti Monga, Muzamal Haq, and Gautam Baruah are successful entrepreneurs. There are several blind and visually-impaired professionals working in the banking sector. There are senior professionals who are blind and working for corporate houses like the Tatas, PwC, Wipro, Infosys, and so on.

Blind people use assistive technology like screen-reading software and magnification tools to engage in the digital space. Potentially, they can bank independently, engage with apps, and be an inherent part of the rapidly expanding digital world. The question is whether the Government and technocrats see the potential, possibility, and value of thinking ‘Universal’ when they plan ahead. Do they actually believe that people with vision impairment can be included as active participants in the emerging Indian economy?

Most banks refuse to open bank accounts for blind customers. They are apprehensive of the capability of blind persons to handle their financial affairs independently. They are reluctant to issue cheque books, credit cards, debit cards, and ATM facilities to them. Is this apprehension really justified? Is the way forward a simple denial of banking facilities?

What will the blind professionals—whose numbers are steadily increasing—do to manage their money?

This is even more critical when the government is discouraging cash transactions. It is relevant to state here that the Reserve Bank of India and the Indian Bankers Association have issued clear-cut directives to all banks that they cannot discriminate on the basis of vision impairment.

A colleague who banks with Axis Bank was recently complaining of their Internet Banking facility being inaccessible. This is true with most banks. While State Bank of India, ICICI, and HDFC banks have taken care to be sensitive to blind clients, and have ensured that steps are taken to make their websites accessible to screen readers and magnification software, most banks have not cared to follow the guidelines issued by the Government. They simply have not recognized the need to comply.

The South Indian Bank website is incompatible with screen readers. When this issue was raised with the bank, they simply said that the mobile banking app could be used instead. Mobile apps on smart phones are certainly convenient and an efficient way of transacting. But the problem is that most mobile apps are not accessible. The recently launched Bhim app has serious challenges of accessibility.

The feedback received from several Android phone users have revealed that the customized keyboard of the app, navigation, and the response from the app has been a challenge. Further, there are millions of blind and visually-impaired people who are not digitally empowered. Are they to be left out of the new digital Indian economy? One can’t be too sure if the DigiDhan Melas and DigiShala would effectively address this issue. It seems like an afterthought, a hurriedly put-together effort to train and empower.

In addition, most bank clerks and officers have no idea how to deal with and facilitate their blind customers. They show no sensitivity, and seem to have no idea of access, or any understanding of the challenges a blind person might face while engaging with the bank. Most banks are very unfriendly when it comes to blind people. This needs to change urgently. With digitization and the shift to plastic money, blind people are compelled to be part of the banking system. Immediate thought and action has to be taken for making banking services welcoming and accessible.

There is also need for a quick word on the new 2000 and 500 rupee notes. These new currency notes have been very disappointing. The so-called tactile markings at the edges of these notes are not at all helpful in assisting blind users to identify the denominations.

This is even more disappointing since the government has come up with these notes after nationwide consultations that the RBI has had with various stakeholders in the past couple of years. 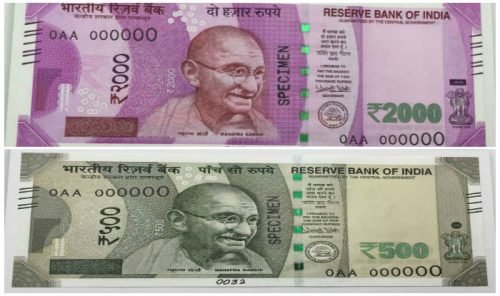 When the country is moving towards a digital and cashless economy, it is critical for the Government to take on board the need for including all sections of society. On the one hand, one talks of skilling and employment of persons with disabilities – which includes the blind and visually impaired citizens – and on the other hand, digital and financial infrastructure being developed is leaning towards excluding these very people. This certainly is not deliberate—one can put it down to ignorance, and the emerging mindset that does not perceive and recognize the need or the value for including people who are blind and visually impaired. It is a mindset that rapidly needs to change.

(The author is the CEO of Score Foundation in New Delhi.)

Score Foundation’s flagship project is Eyeway, which operates a national toll-free helpline (1800-300-20469) for the blind and visually-impaired. Find out how you can contribute to the Foundation’s efforts here.