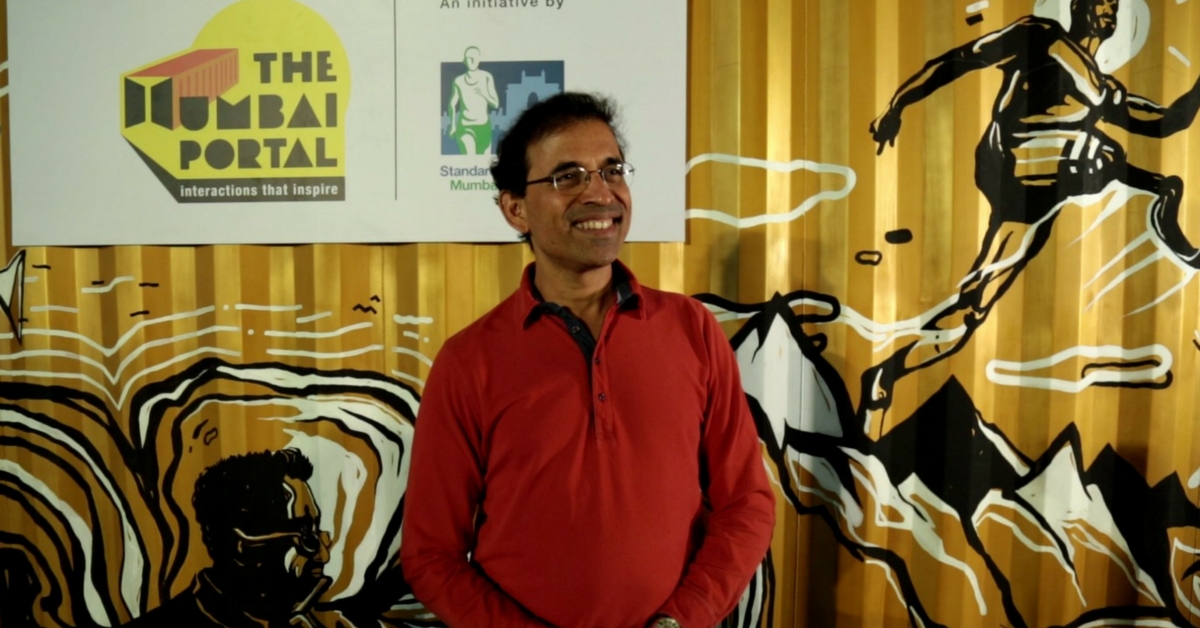 We caught up with Harsha Bhogale at The Mumbai Portal – an initiative by Standard Chartered Mumbai Marathon, created by Chlorophyll Innovation Labs and Shared Studios, supported by The Better India.
“Cricket is the only sport in the world where you are absolutely horrible at something and you still need to go out and do it,” Harsha Bhogle once said when the eleventh man from the then-Indian cricket team was coming to the field to bat.

Indian cricket commentator and journalist, Harsha Bhogle never seems to be short of words. His wit and humour, mixed with his spontaneity and love for cricket always create magic behind the mic. Born in Hyderabad, Harsha studied Chemical Engineering after school and then did his post-graduation from the Indian Institute of Management, Ahmedabad. Beginning his career as a cricketer for the Andhra Pradesh Cricket Association and playing small-level cricket, it wasn’t till he turned 19 that he took to cricket commentating. This was with All India Radio. Since then, there’s been no looking back.

Today, Harsha is one of India’s best commentators. According to his website, he has commentated for over 400 one-day internationals, over a hundred test matches and has been closely associated with T20 cricket.

The Better India got a chance to interact with the man in Mumbai recently. Here’s Harsha Bhogle talking about cricket, negativity in the media, changing careers, and more.

On the ease or difficulty of switching careers to do something completely different:

All I want to say to people who want to change careers is – don’t change careers and do something just because it sounds cool. If you want to do it, do the best you can. If you are giving up something to do something else, then you have no choice but to be among the best in the country at it. Because if are giving up what you know, to go and do something that you don’t know much about – you have no option but to be the best at it because you have given up your strength, and there is no point in doing it otherwise.

But I worry about the romance and the publicity associated in our media with all this stuff – I fear that a lot of people who would have done very well in normal traditional careers, might just go astray because it is considered to be cool to be different…Because people are doing it, you also don’t have to do it because your strength might be something else. So I worry a little, because I am hugely energised by young India. This is the finest generation India has ever had. And that is why I am so pissed by the negativity that abounds in the media because India, I believe is going through its most positive phase.

On the need for positivity in the media:

The energy of India is incredible, and it’s our generation and people just after mine who are making them negative and disappointed and disillusioned – when India is poised to be among the great nations in the world.

The problem is that from the start, from the day news appeared, bad news was good news for the industry. And good news was just like – yes it’s there. So I suspect, especially with the competition in news channels these days and with a lot of people coming in the media for the wrong reasons, there is relentless search for sadness, for the gory, and for negativity. And there is a feeling that that’s all India is about because you are screeching and screaming and shouting trying to hold people for the next 10 seconds, which is what clickbait journalism is. Clickbait journalism will vanish very soon. I don’t know of a clickbait journalism portal in India that is making money. So I am personally going through a phase where I am very disillusioned with mainstream media in India.

On social causes that are close to his heart:

I don’t do as much as I should because I don’t seem to find the time, and I know that is a cop-out. So I do what I can, but I like to do it quietly.

On whether sport acts as a healing factor for people in many countries:

It already is, enormously. Look at India and Afghanistan. See what cricket has done to Afghanistan. Suddenly, Afghanistan is an identity. Cricket is forming a bridge between India and Afghanistan – politically it is right or wrong is a different story. All of a sudden Afghanistan has gone from being level five, to playing T-20 world cup. It is the most incredible story. Sport has been a huge healer there. Sport is an escape. It allows you to escape, but very differently from the way movies allow it. They allow that in a very fantasy-driven way. Sport allows you to escape, but escape into the real world.

On how psychology plays a role in cricket:

Sport is no different from anything else in life. Sometimes we put halos over sports people and think oh wow, these are nice cool guys. There are the same insecurities; they are affected the same way as anybody else. So the role of psychology, psychiatry, the role of mental healing in sport is just as powerful as anywhere else. Sport as a profession is seen to be glamorous and different. But it comes from the same insecurity that any other profession does.

On what he does when not working on cricket commentary:

When I am not doing cricket, I do a lot of corporate speaking programmes, because I love sport passionately. I see sport as something beyond numbers. I keep telling people that if numbers are all that you know you hardly know 10% of sport. My wife puts it all together and we make corporate presentations on learning from sport for managers – talk about leadership, bonding together, playing together, understanding players, understanding weaknesses, understanding strengths, making change, how T20 has affected the test players – so we talk a lot about what sport can teach young managers.

His tips to young-aspiring commentators:

Find another profession, because it doesn’t exist. When I started the profession did exist because it was a government-controlled media, but today the profession definitely doesn’t exist because people are fishing in the wrong pond. People are searching for batting and bowling averages and career records. The correlation between them and a good broadcast has never been established. So if you are a very bright young kid who understands the game, feels the emotion, follows analytics, and tells a great story, it’s not the television channels alone that are looking for you but also a plethora of websites. You need to have a mix between analytical and emotional commentary, because sport is drama and you cannot forget the drama around sports.