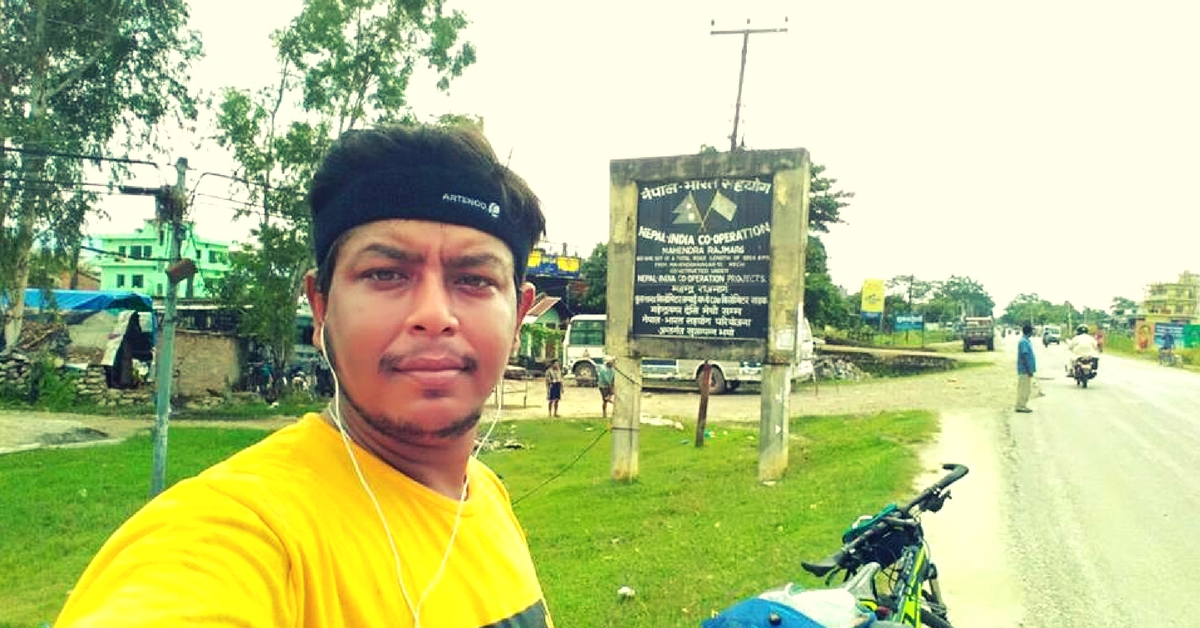 Sudipto Pal, an adventure enthusiast, has embarked on a unique 5000 km solo cycle ride in the Himalayas, to give voice to the cause of children’s education.  He has reached Kathmandu, completing the first half of his solo journey

To start his journey from a politically disturbed Srinagar reeling under the grip of curfew was far from an inviting idea. And a delayed courier carrying some important spare parts of the cycle only added to his apprehension. However, it was surely indicative of the mixed bag of challenges involved; of the fact that this was not going to be an easy journey. But the situation only strengthened his indomitable will.

Now at Kathmandu, Sudipto Pal has already traveled through 2500 kms of his Ride for Child Rights, dedicated to the cause of children’s education.

A strong believer of ‘hope for the best and plan for the worst,’ Sudipto took few days to achieve this feat and that too, because he got held up by intermittent landslides and torrential rains.

Beginning the journey from Kishtwar instead of Srinagar was a decision taken in the very last minute. From Kishtwar, he moved along the Kaza-Tabo-Bataal-Chandrataal-Keylong-Theog circuit, and crossed the Pangi Valley first and then the Lahaul-Spiti Valley to reach Uttarakhand.

En route, he crossed some of the most treacherous trails in the Himalayas, including several high passes, narrow strips of roads laced with deep gorges, torrential streams and tricky tracks, rock-fall zones, glacial terrains and dense Alpine forests.

This 5000 km solo Trans-Himalayan cycle ride that covers the entire Himalayan arc is something which has not really been attempted in its entirety. Many have cycled in the Himalayas, but a solo unaided ride stretching across the whole route, from Kashmir to Arunachal Pradesh at one single shot, through three different countries – this is definitely a first. Again, this journey is not just about cycling through the mountains. It is also about getting to know its people, understanding their culture and lifestyle; it is about building a relationship with them over these four months.

Most importantly, this journey, with all its natural hazards and obstacles, is actually about the children of this country.

This is not the first time Sudipto has been to the Himalayas. In fact, he has been in a relationship with the mountains for the last fifteen years. And he has seen, over the years, that in all circumstances, and especially where one has to live in constant war with natural forces, it is children who are the most vulnerable.

“We keep saying that children are our future, but how many of us actually bother about them? My experiences say that children of the mountains are in no way lesser than the children of our cities. In fact, they are quite ahead in some cases. But it is only the access to opportunities that hold them back. They do not even have access to institutional education. Schools, I strongly feel, can give strong foundations to their future,” says Sudipto.

It is this reason that brought CRY – Child Rights and You to support this Ride for Child Rights and to amplify Sudipto’s voice in his brave attempt to raise awareness about the importance of education.

CRY, with its extended network all over the country and its experience in the field of education, will be able to impact the lives of more than 2.5 lakh children through this initiative.

‘School the Spark’, the National Campaign held by CRY – Child Rights and You, addresses issues related to children’s education. The campaign, spread over three phases over the next six months, will focus on the challenges faced by children in accessing their basic right to education. When a child drops out of school, the potential of their abilities remains unexplored. Education ensures that this ‘spark’ in every child is revealed and nurtured further, giving them a platform to shine.

CRY has always believed in the power of the youth to bring lasting change. Young people like Sudipto are inspirational examples of how passionately the Indian youth can engage with the cause of child rights. Sudipto’s Trans-Himalayan ride for child rights will not only help generate awareness around the importance of education in the lives of children, but also help raise funds to ensure that thousands of children get their right to education.

Note:This is the first in the series on Ride for Child Rights journey. We will keep bringing you glimpses of Sudipto’s journey as well as his discoveries on the issue of education and children through the course of his ‘adventure for a cause!’ You can follow Sudipto’s progress along the trail and to get real-time updates of his journey here.