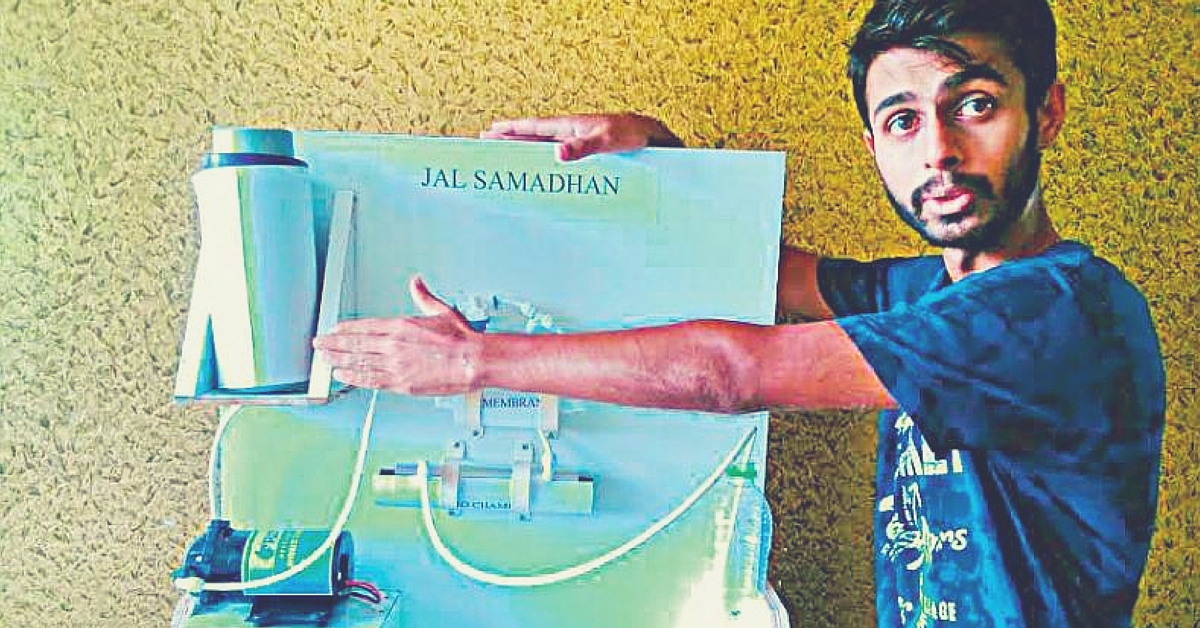 Using natural materials like sugarcane bagasse and coir, Rakshit Prabhakar has built a water-purifier that thousands of people can afford.

Water purifiers have become an inevitable buy for our households. But this almost essential commodity is unaffordable for many given the prohibitive price of the purifiers available in the market. Even if the cost is not a deterrent, it is still not scientifically clear if these purifiers are depriving people of essential minerals with the technologies they use – such as reverse osmosis. Many people just get overwhelmed with the cost and quality aspects of the purifiers and decide to buy water cans from local suppliers, which are even more untrustworthy.

Rakshit Prabhakar, an M Tech student from BMS College, Bangalore, may have just the solution for such problems. An inherently curious inventor, he has been making new machines and apparatuses since the time he was in Class 6. While looking out for a project for his M Tech course, he decided he would work on something that would be beneficial to many people.

The two big issues the people of Bangalore face are related to water and garbage. Rakshit was keen to find feasible solutions for both.

Rakshit tested the quality of water in various places across Bangalore. “The three major pollutants of water are dyes, heavy metals and micro-organisms. I decided to build a purifier that will remove all these harmful elements but retain the mineral richness of the water”, says Rakshit. The cost aspect was critical, according to him. He did not want to build another high priced product that would beat the entire purpose of having mass reach.

Rakshit decided to look out for low cost resilient natural materials that could become a part of his solution. He did his research and zeroed in on two such materials – sugarcane bagasse and coir. Sugarcane bagasse is available for free since it is discarded as waste and coir can be bought cheaply.

Rakshit used these two items for the water purification process in an innovative way. The other components for the purifier – like the motor, the ultraviolet membrane and the ultra violet chamber – were fairly inexpensive too. By putting all these materials together, Rakshit was able to build a purifier for just Rs. 1500. The purifiers in the market cost upwards of Rs 8,000!

He repeatedly tested the water purifier’s performance with different water types. The water purified by the machine was tested at reputed water testing labs and was found to be potable and healthy. Rakshit has named his purifier Jal Samadhan – the one that will bring a solution to water problems.

He indeed wants this to become a solution for the water woes of people across the country. “There are millions of people who cannot afford to buy a water purifier. If Jal Samadhan can be taken to rural communities as well, we will be doing a great service to the people,” says the 24-year-old.

Rakshit has also been working on the other big challenge facing Bengalureans – garbage. He has built a garbage composter prototype that has the potential to eliminate the need to collect organic waste from households. His machine converts kitchen garbage into biogas, right at the source. The young inventor has many more useful ideas brewing in his scientifically inclined brain – and he hopes to bring most, if not all, of them to fruition.

You can email Rakshit at: rakshit1383@gmail.com.