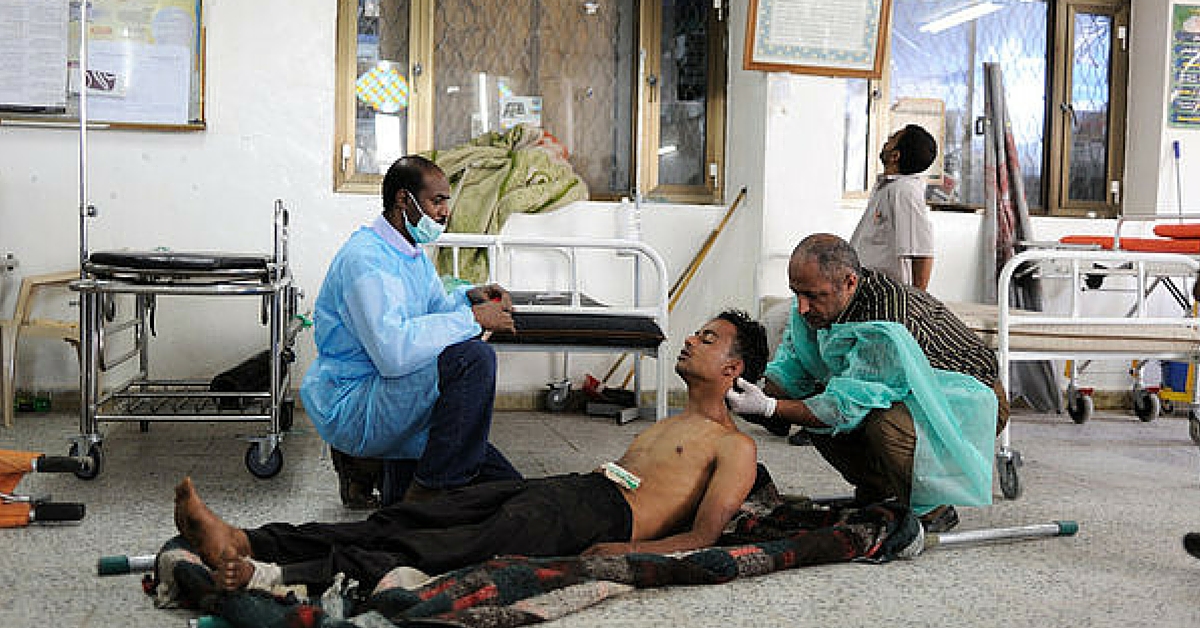 From gunshot wounds to shrapnel injuries, patients in Yemen taught Nishanth Arulappan, a doctor from Vellore, a lot about what it means to work in a conflict zone.

I had only read about gunshot wounds in forensic medicine while in India, and had never seen a single case of the same until I landed up in Yemen in March 2014. In India, the bulk of trauma cases involve road-traffic accidents, but in a conflict zone like where I worked, conflict-related trauma is the bread and butter of one’s practice, and gunshot wounds formed a significant portion of the same.

A dictum I learned when treating gunshot wounds is to remember this: “All gunshot wounds will certainly have an entry wound, but not necessarily an exit wound.”

The entry wound would be just a minor skin defect (sometimes less than 1 cm) and look very benign, while the exit wound would be large and obvious, giving it the proper “effect.” The problem arises when you have an entry wound, but no exit wound, especially when the trajectory of the bullet inside the body is close to any of the vital organs. Some costly lessons were learned in the course of understanding this concept. Another concept that was challenged is that, unlike in movies, nobody can die from a single gunshot wound!

An interesting case I remember is of a man who, while having tea in a shop on a Thursday morning, suddenly felt “something” enter the right side of his chest.

Weddings are commonly held on Thursdays and are celebrated with gunfire (of course, with the muzzle of the weapon pointed up in the sky!). This was one of those days, and this guy walked into the emergency room (ER) complaining of a bullet in his chest. An x-ray confirmed the same, and I could feel it superficially.

Thankfully, the bullet chose to stay outside the lung cavity, otherwise our patient couldn’t have come walking to the ER!

Under local anaesthesia, we extracted the round in the ER.

In May 2014, we had a young female patient aged twenty-five. She was six-months pregnant. Her children had ventured out to play and brought back an unidentified parcel. They didn’t know what it was and brought it to their mother. As she was trying to open the parcel, it dropped to the ground…and exploded. Most likely it had contained a fragmentation of a grenade.

When we came to the ER, she was unconscious, and her blood pressure was barely recordable. X-rays revealed shrapnel having peppered her chest and abdomen and she was rushed to the operation theatre. We could not salvage the baby but we did manage to save the mother’s life.

She was admitted for almost three weeks, and began walking after that. She was also a very strong woman and in her spirit, she was very motivated. During our daily rounds, she would be very cheerful and co-operate with the physiotherapy without any complaints. Her strength and endurance are praiseworthy, despite the physical and mental trauma she went through.

In public health there are three levels of intervention: primary (which is essentially preventive), secondary (which is reactive), and tertiary (which is rehabilitative). As a doctor in MSF, I have been on the edge at the secondary level – reacting and responding to the victims of the conflict. MSF’s presence and assistance in areas where even governmental mechanisms are inadequate, goes a long way in serving populations in distress.