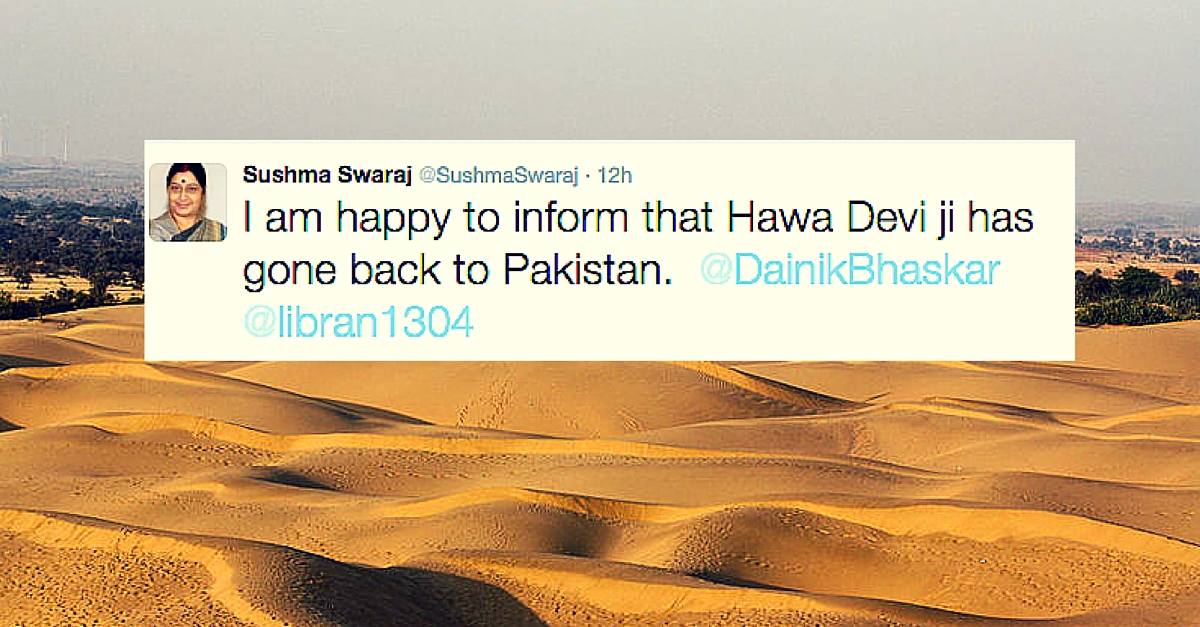 The Ministry of External Affairs (MEA) has been keeping an eye on both digital and traditional media sources, often helping out people who would otherwise have little chance. Now, in another example of the increased responsiveness of the MEA, an 80-year-old woman has been reunited with her family in Pakistan following a report in the Dainik Bhaskar.

Sushma Swaraj had posted a photo of the report on her Twitter account on 20th December, 2015, saying that she would “sort this out soon”.

Thank u @DainikBhaskar I will sort this out soon. pic.twitter.com/TQ4LK3fJYM . @libran1304

Well, it seems to have indeed been sorted out. Hawa Devi, her son, and sister-in-law had come to India in April 2014 on a month-long visa. They first went to Haridwar for a pilgrimage, then to Jodhpur to visit family members. They had since been stuck in Jodhpur in a state of limbo, with officials neither giving them permission to stay nor allowing them to leave. During this time, their passports and visas also expired.

Following the media report and Sushma Swaraj’s promise, Hawa Devi and her family received permission to return to Pakistan. Jodhpur police said that they could now leave the country since the “matter was cleared” by top government authorities.

They boarded the Thar Express on Friday, which will take them home.

I am happy to inform that Hawa Devi ji has gone back to Pakistan. pic.twitter.com/TQ4LK3fJYM@DainikBhaskar@libran1304

Hawa Devi can now finally be reunited with her ailing husband. Her long, forced absence from home, though, meant that she was unable to be there when her grandson died.

“I am thankful to all, who made it possible. Had it been in time, I would have seen my grandson, who passed away a few months back,” she said to the Times of India.