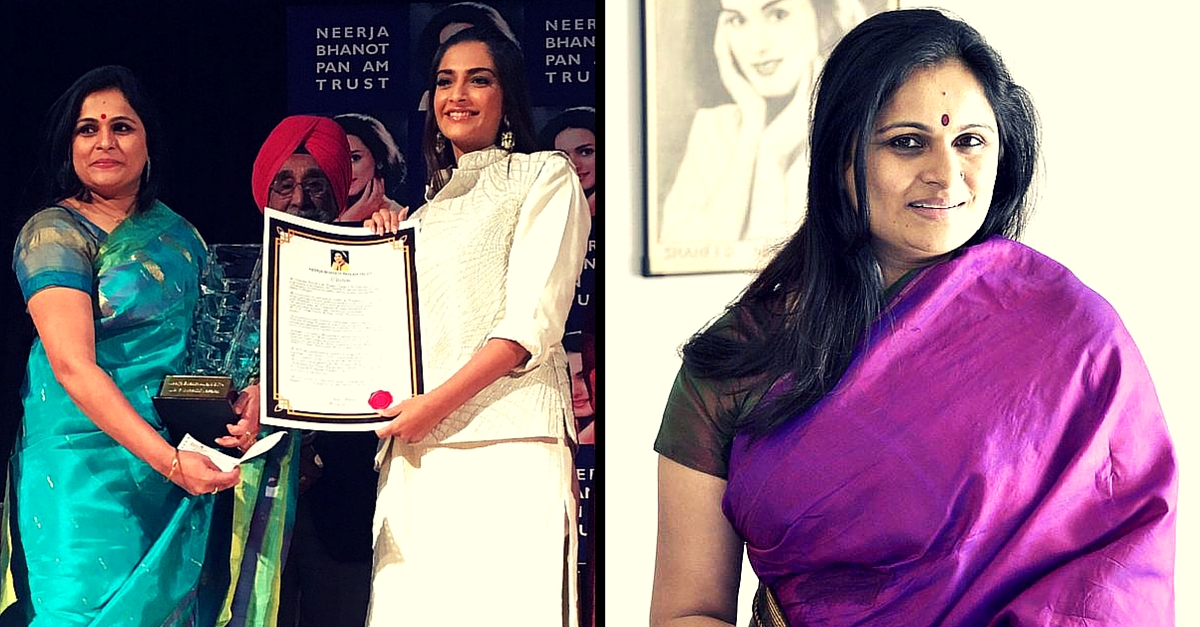 The Neerja Bhanot Pan Am Trust has been set up in the memory of Neerja Bhanot – the brave woman who was the senior flight attendant on board Pan Am Flight 73 that was hijacked in Karachi in 1986. Neerja showed immense courage and helped many passengers escape. She was shot on September 5, 1986 while shielding three children from terrorists.

The trust was set up by her parents Rama and Harish Bhanot, with the insurance money they received after her death, and an equal contribution from Pan Am. Today, they present two awards of Rs. 1,50,000 each. One award is given to an Indian woman who raises her voice against social injustice and also helps other women in similar situations, and another to honour an airline crew member who acts beyond the call of duty.

This is the 24th year of the award and it was given to Subhashini Vasanth of Bengaluru, for the first category. Subhashini’s husband, Colonel Vasanth Venugopal, lost his life while fighting terrorists in Jammu and Kashmir. He was awarded the Ashok Chakra (Posthumous) in 2008. Subhashini founded the Vasantharatna Foundation in his memory, with the aim of creating a support system for the families of martyred soldiers.

“I am proud to receive this award as it represents the spirit of Neerja Bhanot’s determination and grit in the face of overwhelming circumstances. A woman must always face all adversities in life and ensure she is treated with respect. She must stand up for her rights, come what may,” said Subhashini.

Here are five things to know about this remarkable woman.

She started an NGO named Vasantharatna Foundation for Arts in the same year, and named it after him because starting the NGO was something they had planned together.

2. She is a renowned Bharatnatyam dancer.

Three months after the death of her husband, Subhashini wrote a play name Silent Front. It was based on the lives of army wives, and she was the protagonist. She performed the play in Delhi and Bengaluru and the funds generated through it helped strengthen the base of the Foundation in the initial years.

3. The foundation began work in Karnataka and has helped over 80 families till now.

She initially identified 30 families of martyrs in Belgaum, Bagalkot, Coorg and other parts of rural Karnataka, and started helping them. The foundation provides education scholarships to children and emotional and legal counselling to widows. She also conducts empowerment programs for women and outbound learning programmes for both women and children.

4. She co-authored a book named Forever Forty with Veena Prasad. It is the biography of Colonel Vasanth.

“The book is a collection of memoirs for my two daughters who were aged seven and 10 at the time of their father’s death. I want them to know their father as he really was,” she said.

5. She wants to add the award money she just won to a fund that she is setting up to give awards to children studying in Colonel Vasanth’s high school and college, for all-round excellence.

6. She holds a graduate degree in Psychology, Literature and Journalism.