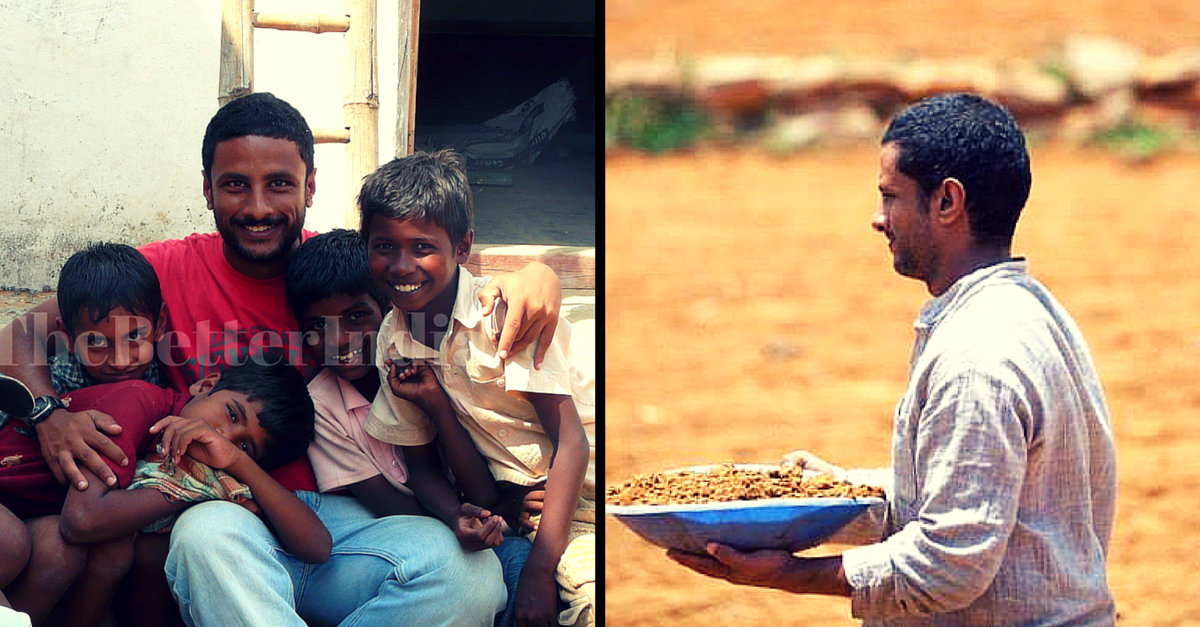 He quit a well-paying corporate job to build a ProtoVillage that will exemplify abundance for the rest of the country. This is the story of Kalyan Akkipeddi.

He quit a well-paying corporate job to build a ProtoVillage that will exemplify abundance for the rest of the country. This is the story of Kalyan Akkipeddi.

“On my 30th birthday, a friend asked – ‘How many years do you have to be socially productive now?’ Maybe 30, I said, and multiplied it with 365 days. Suddenly, I had about 10,000 days staring at me, and there I was on my first day, doing nothing. We always used to talk about what we can do for other people, but it was only talk all the time. So I decided to make those 10K days count. The very next day, I went back to my workplace and submitted the papers for my resignation,” recounts 38-year-old Kalyan Akkipeddi.

Today, Kalyan is heading the construction of an entirely new village in Andhra Pradesh. He calls it ProtoVillage – the prototype of an abundant rural community that is being built for and by the villagers themselves. The idea is to make something that can be replicated all over the country.

Surprised? Get ready to be amazed. This is the story of how an engineer with an MBA degree ended up building a village and living in it.

After quitting his job, the only thing Kalyan wanted to do was to travel around the country to understand the role poverty plays in the lives of most Indians. This had often been the topic of discussion between him and his colleagues.

But he set up an interesting condition for himself — that throughout the journey he shouldn’t have to pay for his food and accommodation. “So, in the interest of survival, I started travelling through rural India, because I felt it would be easier to make friends in the villages and get food too,” he says. And thus, what started as an attempt to understand the poverty structure in the country, ended with Kalyan travelling for two and a half years straight.

You May Also Like: This Man Quit His Own Job to Create Sustainable Employment in a Jharkhand Village

The experience was very confusing for Kalyan in the beginning. During his days in the corporate world he had heard people reduce the entire issue of poverty to things like poverty line, bottom of the pyramid, etc.

“But it is difficult to be convinced that if suddenly everyone could spend $ 1.25 a day the world will be a better place…I couldn’t find a standard definition for poverty.”

This was the state of mind with which he entered a tribal belt – from the west extreme of Kutch, through central India, all the way to Sundarbans in the east. Kalyan travelled in this region for eight months, a period he calls the most inspiring time of his life. In this tribal belt he found some communities living in complete happiness – they literally had no complaints about life. It was then that an idea struck him – instead of spending energy on eradicating poverty, why were people not working on creating abundance?

“That sounded a lot more empowering to me than removing something that I did not even understand,” he says.

Thus, the idea of ProtoVillage was born.

Kalyan came down to his native place – Anantpur district of Andhra Pradesh. Here, he travelled around 166 villages and finally chose Tekulodu village as the one where he would live and start working. He was careful not to set any big expectations around his presence in the village and his goals in the initial days were to simply document the lifestyle of the villagers, and to work on blending in. Eventually, when the villagers saw him coming in very early each day and leaving late, they offered him a small house to stay. Kalyan decided that he would eat at a different house each day and provide an extra set of hands for whatever that family did for a living. During dinner with a different family every night, he would open his questionnaire and document the financial health of the family members. In about 100 days, he had worked with all 100 families in the village.

Through his conversations with the villagers during this time, he got a good understanding of the financial matters of the village. Finally, Kalyan chose one family that was earning just Rs. 6,500 per annum, and started working with them. The idea was to stabilise their earnings through farming. And in about eight months’ time, Kalyan, the farmer, and the farmer’s wife, turned an uncultivable piece of land into a productive patch, with no external help. Today, the family earns Rs. 14,000 a month.

They generate their own electricity from a handmade wind turbine that was made using an open source design, and live happily in an eco-friendly shelter.

Working with this family taught Kalyan that abundance is indeed possible, and he wanted to now build an abundant community. But he also learned that the villagers don’t like preachers. They respect people who demonstrate. He purchased 12.5 acres of land in that panchayat itself “to setup a demonstrative rural community that is ecologically sustainable, socially cohesive and economically viable… to be built by the villagers, for the villagers.” His wife sold her business and arranged the funds for the same, and a few friends contributed to the initial corpus.

You May Also Like: These Engineers and Students Electrified Two Karnataka Villages in Less Than Two Months

When the idea was shared with the villagers, 10 families volunteered to be part of the endeavour. It was decided that the village will be home to a maximum of 15 families and all the families, including Kalyan’s family, would have equal rights to the land as guardians.

But everybody had to earn that right by demonstrating their commitment through shram-daan for six months, in which time they dug eight ponds on absolutely barren land.

“We were an object of ridicule in the village because instead of farming we were digging ponds. But on the last day of making stone walls around the ponds, the clouds broke and it rained. All the ponds filled up and we became a tourist spot in the village,” smiles Kalyan.

Today, the village is energy self-reliant, WiFi enabled, and has a consistent source of water. Members of ProtoVillage grow their own food as much as possible. The residents built an eco-friendly visitors’ centre, in which they currently reside. They will soon start building their respective homes. Energy generation happens with the help of a solar plant and a wind turbine at the moment. Soon, a biogas plant will be added to the system. Kalyan identifies experts who are willing to share their knowledge with the villagers. For example, one of his friends helped them set up the wind turbine. He spent a lot of time training villagers and now a few can install the systems themselves. The whole project is crowd funded. Kalyan’s friends, who come to visit, find a project that they want to work upon – like tree plantation, solar water pump, etc. They take it up, fund it, and run it to conclusion.

Kalyan, who has been living without a job since 2008, has simplified his life so much that he doesn’t need much in terms of finances he says. While his parents were concerned in the beginning, they began volunteering once they saw the kind of affection the villagers have for their son. His wife also lives there and adds to the strength significantly.

“The biggest challenge in this whole journey was myself, my own imaginary hurdles. I don’t consider anything outside as a big challenge because you will always find a way. I have a simple dream and I am super committed to it. I live very happily now, thanks to the people I met and their generosity. That’s enough to keep me going for a lifetime,” he concludes.

ProtoVillage should be ready for demonstration to the outside world by August 2017.

You can contact Kalyan by writing to him at kalyanakkipeddi@gmail.com.

You May Also Like: How Jharkhand’s Waterman Is Ensuring All Year Water Supply in 51 Villages & Bringing Back the Forest