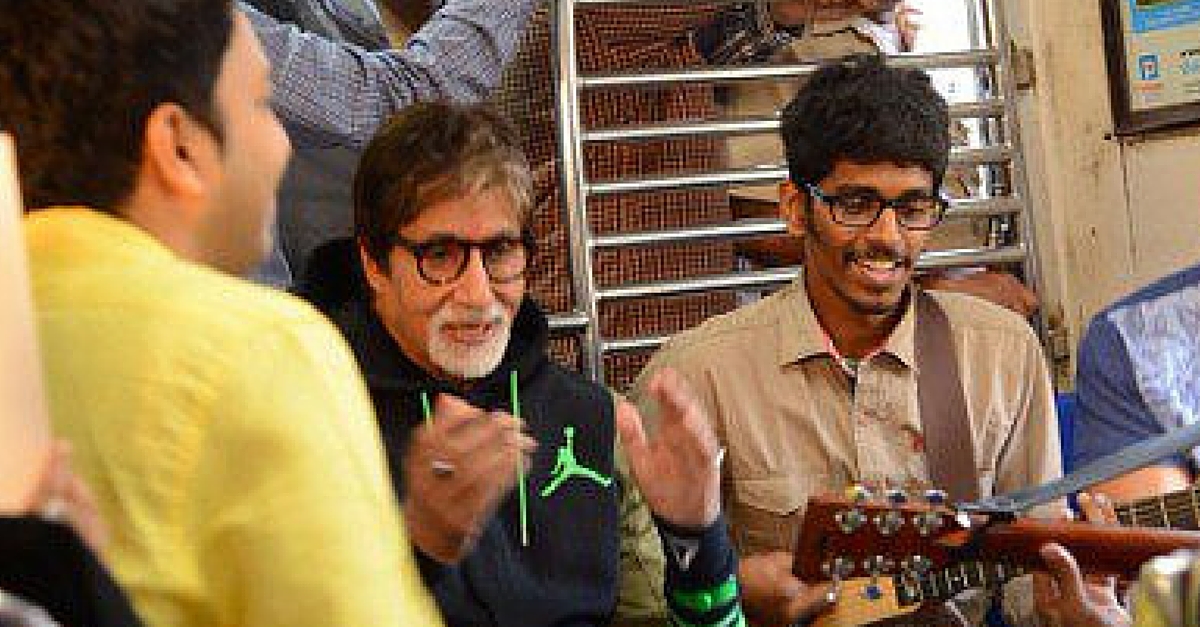 This young man spent a lot of time in the cancer ward of a hospital in Mumbai when his mother was undergoing treatment there. Today, he is seen inside local trains in Mumbai collecting funds for the treatment of cancer patients – with a guitar and a donation box.

A 23-year-old man singing and strumming famous Bollywood numbers on his guitar is a common sight in Mumbai local trains running between Dadar and Ambernath these days. This young man, Saurabh Nimbkar, is using music for a mission – to collect funds for the treatment of cancer patients.

Four times a week, on his way back from work, he belts out popular Bollywood numbers for an appreciative audience that usually drops some money generously in his donation box.

Saurabh’s mission stems from some difficult times he saw in 2013 when his mother was diagnosed with blood cancer. She was admitted in the cancer ward of the King Edward Memorial (KEM) Hospital in Mumbai. “We stayed in the hospital for her treatment continuously for about four months – my brother, uncle and I,” he says.

There, Saurabh noticed that most of the patients admitted along with his mother, and their families, had come from rural Maharashtra. Many of them were from low-income backgrounds and had left their jobs to accompany relatives for a treatment that is extremely costly. Having given up their source of income, they were all trying hard to live in the city while also taking care of their loved ones.

“There are several trusts, like the Tata Memorial Trust, Rajiv Gandhi scheme of the government, etc., that are meant to help such patients. But the problem is that they deposit the money to the hospital’s account in the name of the patients. Whenever a patient needs a particular medicine, the money gets deducted from his/her account. But no money goes into the hands of the relatives who also have to go through a lot to make arrangements for the treatment. Also, if a medicine is not available in the hospital, they have to put money from their own pockets to purchase it from outside,” says Saurabh.

But amidst all these challenges, Saurabh was inspired by the way people were doing the best they could to help each other. Sometimes doctors themselves would come forward and financially help patients who could not afford the medicines. Older patients always assisted the newer ones in understanding the operations of the hospital.

“Once, a medicine that we needed for my mother was not available in the hospital. Another patient had it and he readily agreed to help us out, even though he did not have much in terms of finances himself. That was when I realised that there is nothing like rich or poor in this situation. You don’t need to have any special financial background for helping people if you want to,” says Saurabh.

Throughout the treatment, Saurabh would carry his guitar to the hospital and play for the patients. His music would cheer up the tense atmosphere in the ward.

“Everybody there was worried about something or the other, be it food, accommodation, availability of medicines, and many other things. That’s why it was nice to see that when I sang for the patients, some of this tension was relieved. The atmosphere became lighter. Even the doctors didn’t stop me because they saw that it was having a good effect on the patients and their families,” he recalls.

Saurabh was in his second year of college at the time and used to also play his guitar on trains while commuting to college from Dombivli to Matunga.

That was just for fun. People loved to hear him play after a long day at work. Some even joined him and sang along. “So I thought I’d continue doing the same thing, just this time, I would ask people for money to help out cancer patients. I discussed this with my mom and she was very happy. She liked the idea very much.” Unfortunately, in September 2014, Saurabh lost his mother.

Saurabh put the idea on the backburner for the time being but did not forget it. In May this year, he decided the time had come to pull out his guitar again. Employed with a pharmaceutical company, Saurabh’s office is located in Ambernath – he travels from Ambernath to Dadar, and from there he takes a train back to his place in Dombivli. It is on these routes that he plays his guitar to collect funds.

“In Mumbai, most people travel by local trains. So this is the best option to reach out to the maximum number of commuters. Every time, I begin with a song. And then, when people get curious about what is going on in the train, I explain the cause for which I am working. And then I continue to play songs. I am not a good speaker, so I avoid talking,” smiles Saurabh.

Saurabh manages to collect about Rs. 1,000 during every trip. And while he receives mixed reactions from his audience in the trains, he is never demotivated. Some criticise him for collecting funds like this, while others appreciate his efforts. There are some who listen to him play till the last moment when the train stops at their station, just to make sure that his purpose is genuine, and then they finally put money in his donation box. Saurabh is happy that for every person who criticises him, there are many present to encourage him as well. Once, a man tried to stop him from playing, saying that what he was doing was not allowed inside trains. But some other passengers stood up for him and stopped the man instead.

All his collections go to a small NGO called Bright Future Association in Thane, which transfers the money directly to the accounts of people and not to the hospital accounts.

“It is a very small and new NGO, so it is not a very large sum that we deal with. They usually try to help only one family at a time. Currently, we are working for a girl. Her treatment is almost complete now. I often call her dad and ask if they are getting the money. There is also a boy that we are working with and his father also informs me that they are getting the required help. That’s how I confirm that the money is going to the right place,” he explains.

Saurabh plans to continue his mission, helping cancer patients the best he can. His family supports him in his initiative and is very proud of him.

This Sunday, Saurabh was in for a big surprise when his audience in the train included none other than Bollywood actor Amitabh Bachchan.

Saurabh was recently a part of his show called Aaj Ki Raat Zindagi, and after listening to his story, Bachchan wanted “to sit by him and travel the distance he does, do what he does, in a show of support and spirit for his incredible thinking“. Travelling between Chhatrapati Shivaji Terminus (CST) and Bhandup on the Central line, Big B sang along with Saurabh, much to the delight of the commuters.

Finally, watch Big B jam with him and everyone on the train right here:

Way to go Saurabh! We are proud of your out-of-the-box thinking.