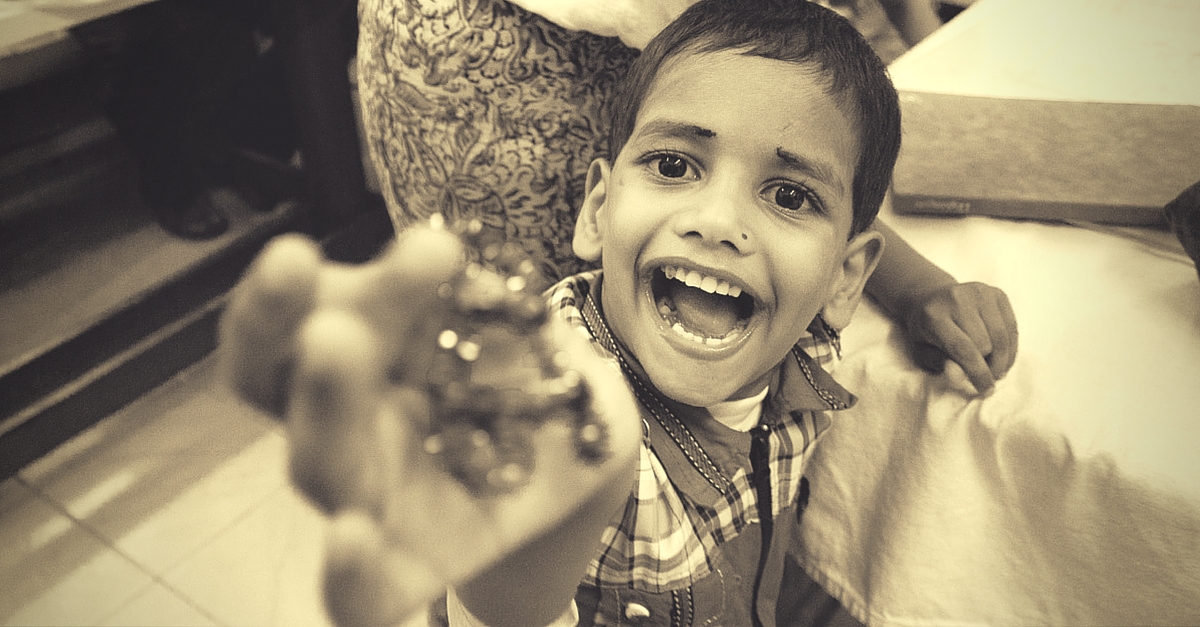 Armed with finger puppets and a bubble gun – this is how people at Pallium India’s facility in Thiruvananthapuram treat children with life-limiting or disabling diseases. Here is a look into the heart-breaking but beautiful world of palliative care for children there.

On a Thursday in July, we got into a car and drove from the Pallium India headquarters at the Arumana Hospital in Thiruvananthapuram to the Sree Avittom Thirunal Government Hospital for the weekly children’s palliative care clinic. This project is spearheaded by Pallium India, a national registered charitable trust that focuses on palliative care. On their website, Pallium India outlines palliative care as care that “involves improving the quality of life of people with life-limiting or disabling diseases, by treating pain and other symptoms and by providing emotional, social and spiritual support”.

We arrived through a scenic route onto the rambling grounds of the hospital, where the trees and the buildings seemed to be in silent battle for dominion – in some places the trees were winning. Inside the hospital wing housing the project, we were greeted with that familiar phenyl-laden odour, and the heavy silence which hangs in such corridors.

The photographer and I were led into the clinic room by Smriti Rana, Consulting Psychologist and Programme Director of the Children’s Palliative Care Project – and almost immediately, our moods changed.

We were greeted by the smiling, bright faces of five-year-old Arif and eight-year-old Altaf, brothers who have cerebral palsy.

Arif immediately reached out, grabbed my hand, and proceeded to teach me how to draw.

Soon we were tying glitter bands on each other’s wrists, before moving rapidly from one activity to the next, based on Arif’s breathless whims.

There was nine-year-old Prija with microcephaly, a neurodevelopmental condition, which made her look several years younger than she was. She sat on her mother’s lap while getting her blood drawn by the clinic’s nurse, Sandhya.

Dr. Annie Varghese knew the name of each child entering the clinic: seven-year-old Satish Kumar with Down Syndrome, a congenital disorder; seven-year-old Reshma with a nephrotic condition that is steroid-resistant; and over ten other kids who filled the room.

She cheerfully announced in Malayalam and English, “My apologies to all the mothers, but I only remember the names of your children”.

Prija sat still like a veteran while her blood was being drawn, but to the onlooker, her bravado was completely heart-breaking. Even small procedures like these are difficult affairs here, like with Altaf, who bawled and howled and refused to be next. At times like these, Smriti Rana comes to the rescue.

She immediately fished into a box of toys and pulled out a bubble gun, filling the room with a stream of bubbles. Altaf was awed, he laughed, and his blood was drawn without any trouble.

Smriti Rana is a master of joyous interruptions. She manages to turn a series of sombre medical procedures into a room celebrating a kid’s birthday party, with all the toppings. Glitter pens, glitter bands, empty sheets of paper, building blocks, and bubble guns are her weapons of choice, and she engages them regularly in her fight against sad, crying faces, painful procedures, and worried parents.

She doesn’t speak any Malayalam but through her touch and focussed attention, she is able to communicate, soothe, calm, and cajole.

“Our weekly clinic started about three years ago and seeing the need in the region, we (Pallium India) decided to open an in-patient facility. We have the plans in place and are now looking for the funding,” says Rana.

Her engagement with the children seems to mirror the motto of Pallium India: Care Beyond Cure.

“One of the biggest misconceptions about palliative care is that it is terminal care. This is not true at all. The simplest explanation would be that it is an overall management of distress symptoms. These symptoms aren’t limited to pain; it means financial, emotional, physical, and spiritual support,” Rana explains.

“At Pallium India, we work with a gamut of conditions, not just terminal ones. For example, we work with paraplegics, but besides pain management and physiotherapy, we also do a home assessment and modify it – ramp it, lower the shelves, and so on – to make them as autonomous as possible. With children, we have to focus on the family as the unit of care. Most of the mothers and kids have been abandoned by the fathers. The women aren’t breadwinners and treatments are expensive, so in situations like this we might find a vocational training course for the mothers. In the case of healthy siblings, we look out for education opportunities through the organisation’s Kutty Kuttam, or Little Family initiative.” she adds.

Sometimes, this could mean that the family would still be under the care of the organisation long after the patient has passed away.

Palliative care is also different for children, because their needs are special and specific.

“Some of these children are locked inside their own heads and can’t have certain kinds of everyday interactions. Some of them have brittle bones; others cannot grasp and hold on to things. Our attempt is to interact, engage, play, laugh, and encourage mirth, which are also ways to manage and alleviate pain and distress,” said Rana. The toy drive was an initiative started by Rana to enliven the clinic’s environment.

On this particular Thursday, the bubble guns turned out to be the show-stopper. As we returned to Arumana Hospital, we bumped into ten-year-old Rahul who has rheumatoid arthritis and was getting ready for his physiotherapy. The visibly exhausted Rana burst into action all over again, running into the neighbouring room which housed the donated toys, to grab another bubble gun. While little Rahul was made to exercise his lungs on a spirometer, she surprised him with the bubble gun. Rahul squeezed the trigger and suddenly, the room was afloat with bubbles.

He laughed, and in that moment, he was just another happy child lost in the wonder of iridescent bubbles.

Pallium India is accepting toy donations for their weekly children’s palliative care clinic. Certain specifications need to be considered before sending the toys across, due to the nature of the children’s illnesses, so if you are interested in sending something across do write to them at info@palliumindia.org

Written by Joshua Muyiwa for Explara Leap and republished here in arrangement with Explara Leap.
Promotion