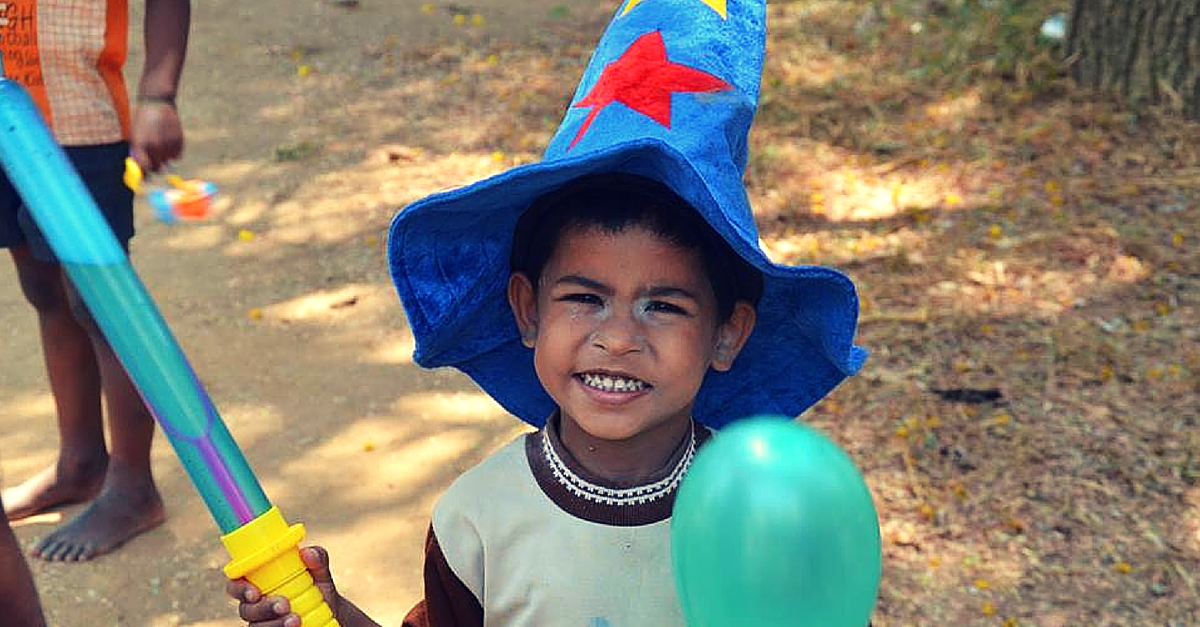 “We cannot cure diseases but at least we can reduce the pain for a while and distract people from their suffering,” says Naveen Loganathan of Humanitarian Clowns.

Remember your childhood days when a clown could bring a smile to your face and make all your friends laugh? Can clowns do any more than that? Well, yes! There is a group of clowns that is spreading love and creating an impact in more ways than you can ever imagine.

Humanitarian Clowns, an organization that aims to support local non-government organisations (NGOs) around the world with its projects, combines social clowning with community development. It was started in 2012 when Tim Webster from Australia attended a Caring Clown Trip to Costa Rica. There, he witnessed first hand, the positive effect humanitarian clowning has on individuals and communities.

Webster then came to India in November 2012, which led to the start of the India chapter of Humanitarian Clowns. He gathered 20 volunteers from Chennai and visited a leprosy home in Vellore.

“The visit was eye opening. The kids there were in so much pain and sadness. They had even been abandoned by their own families and had almost forgotten what it was to be loved,” says Naveen.

That one visit brought incredible happiness to the kids who could not stop smiling. They forgot their pain, even if it was for a short time. This was the power of a mask and a red nose, and a lot of love.

The Humanitarian Clowns try to bring happiness into the lives of those who have lost hope to live. They wear masks and visit various locations like hospitals, schools, NGOs, old age homes, etc., to spread some much needed laughter in what are ordinarily considered serious and sometimes depressing places.

They also give some useful lessons on health and sanitation, creating larger ripples of effect.

Managed by Giridharan, Humanitarian Clowns India has managed to work across Chennai in 20 locations, including hospitals, schools, orphanages, etc.

The team comprises working professionals who take out time on weekends to get “into the skin” of the clowns and spread happiness through various activities. Volunteers are informed two days before an event and are given some instructions, which they need to follow based on the location they are visiting.

“We tell them how to behave with the kids and how to react in certain situations, and how to connect better with people,” says Naveen.

Naveen says clowning is much more than just wearing a mask and making funny faces. He believes it is about connecting with people and feeling their pain directly rather than just using props to make the activity look colourful and happy.

Having started with just 20 clowns initially, the group now has over 450 volunteers across Chennai who actively participate in clowning on a regular basis.

Naveen recalls a special connection he made while clowning. He met a young boy, Santosh, of about 20 years of age. Santosh did not have a nose, which made him obviously look different from other people. Ignored by his family, Santosh was a lonely person when he saw clowning for the first time. Touched by the loving gesture of the clowns, Santosh immediately connected with Naveen and even took his phone number. He then called him the next day and since then they have become great friends—almost like brothers, says Naveen.

Thanks to Naveen and support from other clowns, Santosh got funds to pursue his education. He then started his own flour mixing business, which is running successfully now. This is just one example – Humanitarian Clowns has touched the lives of hundreds of people like Santosh.

Humanitarian Clowns do not just perform at different locations, they have also opened a school in Javadhi Hills. The school has about 240 students from nearby villages and goes up to Class 5. They have hired six full time teachers to manage the school.

The India chapter of Humanitarian Clowns gets funding from Humanitarian Clowns Global to give shape to its activities. The group plans to take this initiative to other cities of the country in the future. The team also plans to start a clowning institute in Vellore, where people from across the globe can come and learn clowning.

They have surely put a smile on our face. We hope they continue to bring laughter and love to millions of others.