8 Must-Read Biographies of Ordinary Indians Who Transformed The Country 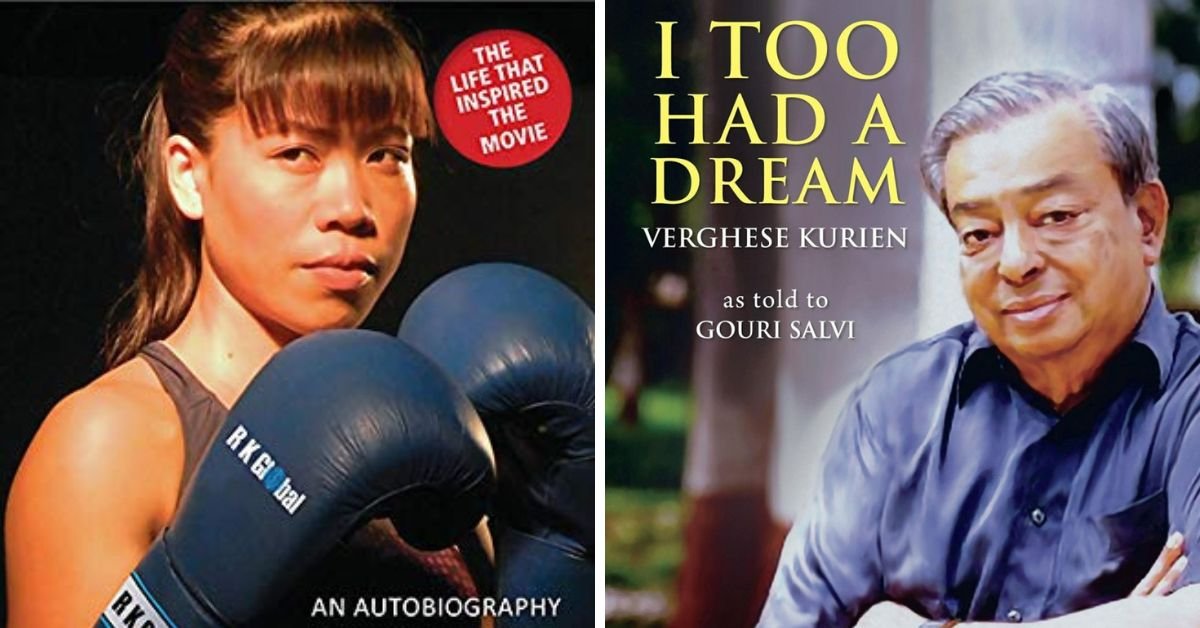 Father of India’s ‘White Revolution’ Verghese Kurien believed that every crisis presents an opportunity if you look close enough. In his biography, he asserts that even to the “annoyance” of those around him, he was never willing to sidestep a challenge, no matter how monstrous it seemed.

This unending grit occurs as a commonality in Indians who shaped the nation over time — lives lead for the “greater good”, or examples set to follow even in the toughest of odds. Here, we recall eight biographies of such Indians who showed us what it means to fight for the life one desires.

Noor Inayat Khan was the first woman wireless operator to be flown into occupied France. She became the only Asian secret agent in Europe during World War II and was awarded the George Cross and the Croix de Guerre. Raised in an orthodox family, she began her career as a writer of children’s books in English and French.

The book narrates the story of this extraordinarily brave woman, who was shot at Dachau after being interrogated and tortured.

2. Nani A. Palkhiwala: A Life by MV Kamath

Nanabhoy Palkhivala was one of India’s top-ranking economists and jurists. An ardent supporter of the Indian Constitution, he co-authored The Law and Practice of Income Tax, which interprets constitutional law on civil rights and liberties.

The book covers his personal journey as well as his firm belief in justice, detailing how he conquered his speech impediment to become among the best orators in the world. It speaks about his beginnings as a lawyer with no family legacy in the field, and highlights landmark judgements and other achievements.

3. I Too Had a Dream by Verghese Kurien

Dr Verghese Kurien was the revolutionary who made dairy farming India’s largest self-sustaining industry and empowered millions of farmers across the country.

“The book narrates the innovative story of how farmers were empowered to build strong co-operatives and increase the production of milk, which ultimately resulted in India becoming the highest milk producer in the world.”

The book describes his journey from meeting a few farmers in Gujarat to building the empire that became Amul.

Born in Kashmir, Baby Halder grew up amid a whirlwind of abuse and ill-treatment Left by her mother at the mercy of an alcoholic and abusive father, she was forced to get married at the age of 12 to a man 14 years her senior, and suffered domestic violence for years.

At the age of 25, she escaped to Delhi on a train with her children and began working in various households to earn a living.

A Life Less Ordinary was Halder’s claim to fame, earning her book the status of a best-seller.

“Written without a trace of self-pity, A Life Less Ordinary is a shocking look deep inside a world of poverty and subjugation that few outsiders know about, It is an inspiring true story of one remarkable woman’s strength, courage, and determination to soar above her circumstances.”

5. Once Upon A Life: Burnt Curry And Bloody Rags by Temsula Ao

Unlike Baby Halder, Temsula Ao had a happy childhood in Assam.

But strife came by unexpectedly when she lost both her parents, leaving her emotionally scarred and lonely, and struggling with poverty for years to come.

Temsula fought back when she started her teaching career and eventually served as director of the Northeast Zone Cultural Centre. and finally, dean of the School of Humanities and Education, North Eastern Hill University, Shillong.

Above all these, she became one of Northeast India’s best known writers. The book details how the author emerged from a life of pain, hunger, and loneliness with education as her tool.

“Relentless struggle and unflagging passion for boxing” – this is how MC Mary Kom’s life can be described in one line.

Born to a poor family of among the oldest settled tribes in Manipur, her childhood was spent helping her parents carry out farm labour. The book relates her journey from a remote Manipur village to becoming a household name.

“Her tough childhood, rebellions and how she held her own in the male world of boxing,” are widely described in her autobiography Unbreakable.

7. My Story by Kamala Das

In an age when women and their lives were hidden from the eyes of the public, Kamala Das, also known as Madhavikutty, not only wrote her heart out, but did so about subjects no one would touch — women’s desires, sexuality, struggles, and inner workings.

My Story is the writer’s autobiography, filled with personal experiences from her passage to womanhood. The work is far ahead of its time and considered among the finest autobiographies of a woman who was also a “rebel who defied categorisation”.

The book delves into the life of the spymaster behind India’s foreign intelligence organisation RAW (Research and Analysis Wing), and maps his journey from the death of his father to his entry in the police world.

It details his tenure as the first chief of the organisation, his efforts to put national interest above all else, his achievements, snippets from his private life, and role in major intelligence operations.