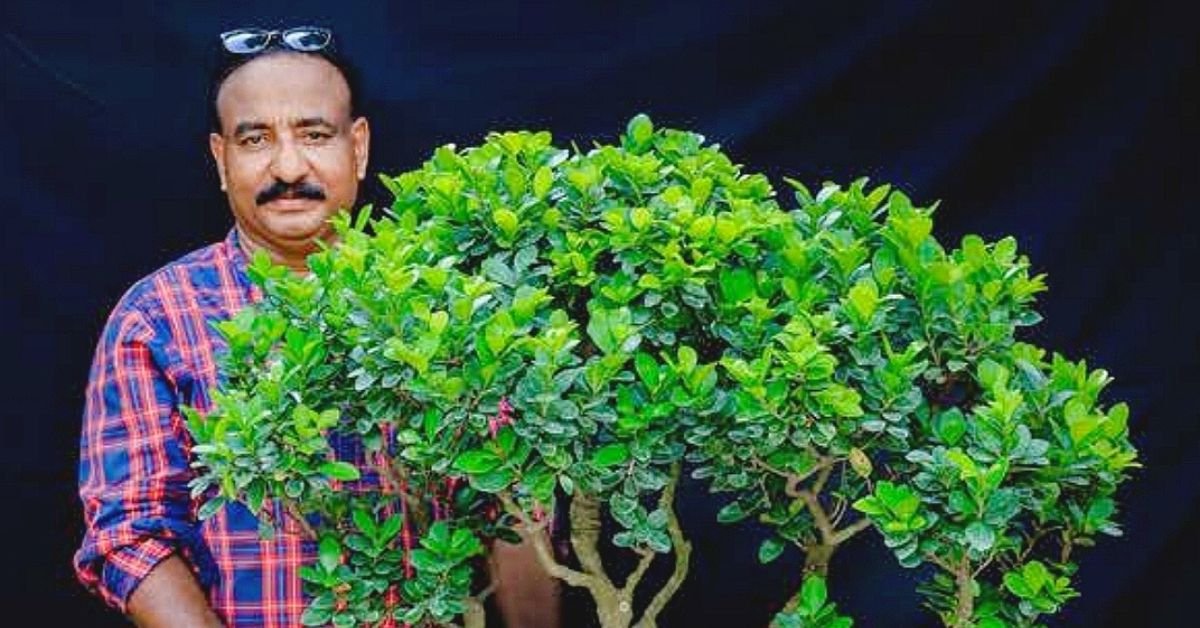 Kerala's Lenus Xavier, president of Kochi Bonsai Club, has been growing 200 varieties of bonsai for the past 35 years.

Since he can remember, Lenus Xavier, a retired marine engineer, has dedicated much of his free time to caring for plants. He credits his Kochi house and its lush garden for this.

“Gardening was not a hobby, but more like a habit I had inculcated from my childhood. Everyone in the family used to take care of the garden. We referred to periodicals for tips, as the internet wasn’t available then,” he recalls.

At the age of 15, Lenus was introduced to bonsais after reading about them in a magazine. “Later in life, I travelled to several Asan countries as part of my work. I had the chance to study more about different plant varieties and how to source them. During vacations, I spent most of my time in bonsai gardens,” the 59-year-old tells The Better India.

Today, Lenus has over 200 varieties of bonsai from across the world. He says he learned a lot about them from countries like Singapore, Malaysia, Indonesia, and China, where bonsai cultivation is popular. He also buys varieties from North and Northeast India.

“It is said that Buddhist monks in China and Japan started growing bonsai as they owned no land of their own. This is why bonsai gardening is popular in Asia,” he shares.

The very first set of Lenus’s bonsai collection included the common ficus, which is a variant of the banyan tree. Slowly, he expanded the repository by adding juniper, elephant tree, tropical boxwood, jade, black pine, and more. The star item in his garden, he says, is the juniper variety, which is grown in different shapes.

“While visiting other countries, I clearly understood how careful bonsai gardening is done. In some places, they gift their precious bonsai garden to children, similar to how we deal with properties. It makes so much sense, because the effort and time invested in the garden is tremendous. It is like having a pet or even raising a baby,” Lenus gushes.

His activities are supported by his wife and two children, who are also interested in gardening. The garden is spread across 4.5 cents of land around his house, and some bonsais occupy the terrace as well. The garden also has a pond surrounded by mini trees. “It actually gives the feel of a miniature hill station, with the small waterfall, plants and ferns,” he adds.

“It takes at least 10 years to witness the proper growth of a bonsai tree. For me, shape is very important for each of them. I spend hours doing corrections to attain the perfect shape. Otherwise it will grow casually, which won’t be so aesthetically pleasing,” shares the urban gardener.

Lenus is the president of Kochi Bonsai Club and conducts exhibitions at many places. The gardener also holds classes for newbies in the field and for botany departments of several colleges in Ernakulam.

In order to share his methods of gardening, he launched a YouTube channel a year ago. “A lot of people contact me on a daily basis for doubts, and it becomes impossible to explain each point to them. Thus, I thought of putting together a channel, where I have made videos covering all areas — from cultivating a seedling to displaying a bonsai. The channel is named Lenus Bonsai Destination and everything is explained in Malayalam,” he says.

Despite owning over 700 bonsai, Lenus is not ready to sell any of them. “I gift one or two small plants to passionate gardeners, but otherwise, this is not a source of income for me. Over the years, I have developed an intimacy with each plant, the same feeling we have towards a pet,” he says. “I have been offered Rs 5 lakh for a bonsai tree that has been in my garden for the past 35 years. But how can money substitute my love for the plant?”

To gardeners who are new to this field, Lenus suggests starting with local bonsai varieties. This gives faster results and encourages them to plant more. He also advises speaking to an experienced gardener prior to beginning. “Happiness is guaranteed,” he assures.