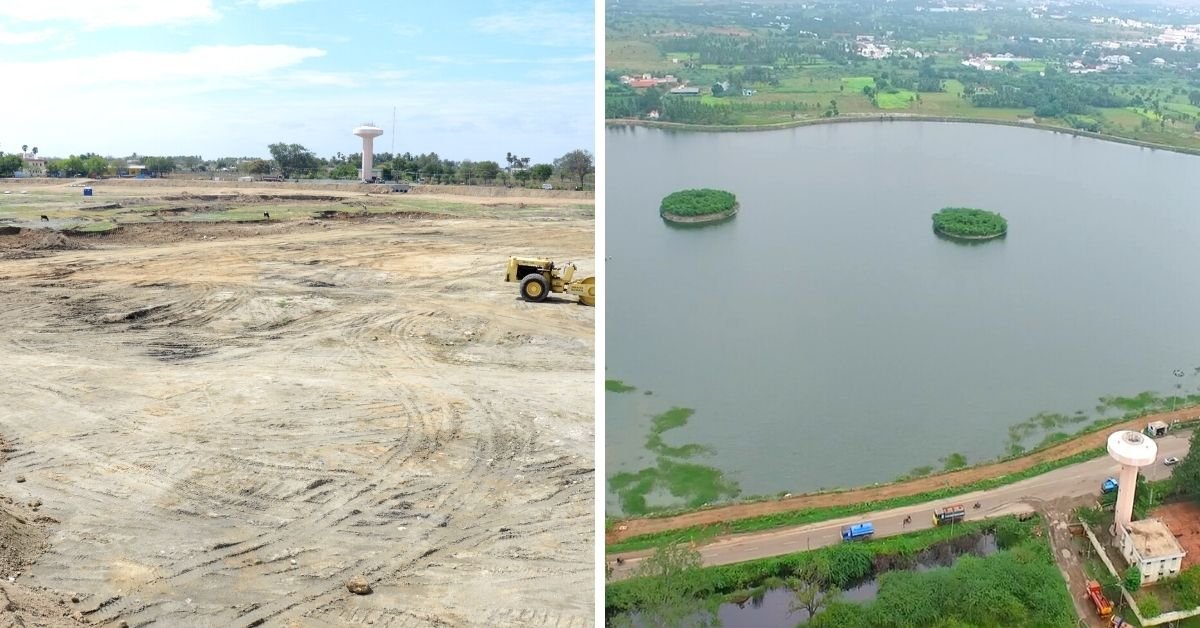 Bringing life and water to a parched village in Tamil Nadu, 5000 people worked together to revive the Andipalayam lake. All thanks to one inspiring man, Tiruppur's Kumar Duraisamy

In 2019, the south-eastern city of India, Chennai made national headlines as its water crisis peaked, which served as a wake-up call for the rest of the country.

Out of the 38 districts, the drought conditions affected 24, but a small town named Tiruppur faced no water scarcity.

The drought condition was not a new phenomenon to the town placed near Coimbatore.

The industrial town had been reeling under drought conditions since 2002. Thanks to the massive industrialisation and commercialisation around the lake Andipalayam that led to a reduction in groundwater recharge.

“The groundwater levels had reached up to 1,000 feet, and the borewells turned dry. The water tankers had no means to lift water,” says Kumar Duraisamy, project director of NGO, Voluntary Organisation for People Empowerment for Rural areas by Youth (VETRY).

TR Sivaram, president of VETRY, conceptualised the technical aspects of the initiative which helped to shape the conservation programme.

Kumar, a native of the town, tells The Better India that the only solution to get water was to replenish the ground and surface water resources. Kumar inspected Andipalyam lake to find that it was dry. The lake’s primary water source, river Noyyal, was cut off by massive encroachments surrounding a 5 km radius of the water body.

“The lake is an ancient water body and one of the main water resources for people. The water body would fill from the excess water overflowing from the river Noyyal through a channel. However, the lake was dry for the past 15 years,” he says.

In addition to the shortage of rains, Kumar says, “The industrial entities, farmers and other stakeholders extracted the water through three temporary waterways. The massive exploitation removed every drop of water from the lake and groundwater sources.”

But today, the lake is filled up to the brim for most of the year, and the villagers face no water scarcity. Standing at any edge of the lake gives the visitor an endless view of the 60-acre water body.

The transformation has taken place with the tireless efforts of Kumar and 5,000 residents who contributed to turning the tides in their favour.

To Revive A Lake

Spearheading the lake rejuvenation work, Kumar reached out to the encroachers explaining the situation and requesting them to shift bases. “Convincing hundreds of entrepreneurs would otherwise be a difficult task. However, given the situation everyone was facing, they agreed to give it a try. I also took help from government officials for the task,” he shares.

Kumar says the encroachment removal helped free up the water catchment area and enabled the easy flow of rainwater into the lake. The businesses also agreed to clear the canal and waterways. The move helped as the next couple of years, water accumulated in the lake.

“However, the water levels did not rise to the lake’s original capacity, and when the rainwater reduced, the lake turned into dry land in the summer months again,” he says, adding that more drastic measures were needed to restore the lake to its former glory.

Kumar then approached the locals in the area to contribute to the restoration work. “Besides financial assistance, we needed physical labour. It is the locals who were responsible for the conditions. Having a feeling of belongingness would ensure the lake was not polluted but protected,” he explains.

So, the locals started de-siltation of the lake. “The residents carried buckets, tubs and whatever else to remove silt and deepen the lake, which would enhance its water carrying capacity. By March, 3,000 villagers contributed religiously every Sunday to this cause. Eventually, the numbers grew to 5,000. In addition, some individuals contributed Rs 100 while corporations donated up to Rs 10 lakh,” he says.

He adds that influencing such a large population for the cause was a challenge.

Kumar says that recognising the participation of the citizens, the builders association, and other businesses decided to contribute and speed up the efforts. “The industrialists agreed to hire six excavators, costing Rs 15,000 a day, to speed up the de-siltation work until the monsoon. Experts in the field also contributed their technical knowledge,” he says.

The Tirupur quarry association offered stones to place along the walls of the lake for protection. The stone bunds also served in demarcating the lake area. Some residents contributed to equipment and other requirements such as saplings.

Kumar says the overall work helped to increase the depth of the lake by 1.5 metres. “We also constructed two islands and planted fruit-bearing trees for birds,” he says.

The villagers were fortunate to receive good rainfall in November, which filled the lake, making the rejuvenation work a success.

“Today, the water is accessible up to 38-feet in the circumference of about 3 km of the lake. The overall groundwater levels have increased to 200 feet in the past few years,” Kumar asserts.

Marappan, an entrepreneur, says his garment factory and farmland has benefited immensely from the lake revival. “Earlier, I used to buy water from outside as the borewells when nearby water sources ran dry. But the rejuvenation of the lake has replenished the groundwater levels, and I no longer pay money for water on my farm,” he says.

The lake revival has also helped biodiversity thrive. “The lake is often seen surrounded by local and migratory birds. The government recognised our efforts and built a park for the recreational purpose along the lake,” he says, adding that his NGO contributes Rs 6 lakh for lake maintenance.

“The funds mainly originate from businessmen from the town. The challenge is to maintain the sanctity of the water body and ensure that the past does not repeat,” he adds.

Kumar says that the groundwater levels have steadily increased over the years and brought water security for the population. “Even if we receive a poor monsoon for a couple of years, the lake levels don’t drop significantly, which enables the locals to meet their water requirements. We had no water shortage during the severe drought of 2019,” he shares.

He believes that the lake revival is an example set by the citizens and can be replicated across India. “The success of Tirupur shows how a citizen movement can contribute towards protection and revival of the environment,” Kumar adds.