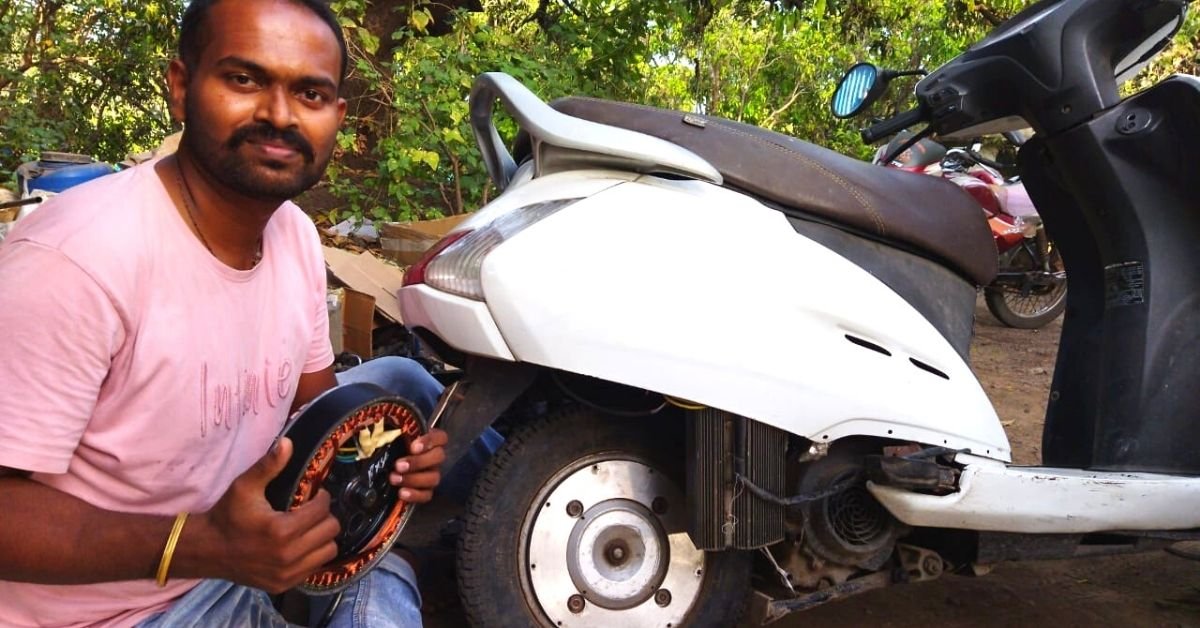 Omkar Thale from Maharashtra turned his hobby into a sustainable innovation by converting his Honda Activa into an electric vehicle and launched Autobat E Moto Pvt Ltd.

Ever increasing fuel prices, which have skyrocketed in the early months of 2021, have compelled many potential buyers to consider buying EVs, be it a two-wheeler or a car. However, EVs face limitations in being able to cover long distances and demand long charging hours. The anxiety makes customers feel sceptical about shifting to the technology entirely.

But what if, instead of buying a new EV and breaking up with fuel altogether, you could retrofit your vehicle and get the best of both worlds? Omkar Thale, a software engineer from Panvel in Maharashtra, has just achieved this feat in a small garage in his backyard.

The 31-year-old software engineer has modified a Honda Activa, which functions as both a petrol as well as an electric vehicle. It will be interesting to note that Omkar started the project as a hobby, and went almost bankrupt in his pursuit, before coming up with a successful model.

The moped can switch modes between petrol and electric even between the ride and can travel up to 85 km on a single charge. The top speed is 60 km/hr and has already run a distance of 9,000 km over the past few months, while it awaits approvals from Automotive Research Association of India (ARAI) and International Centre for Automotive Technology (ICAT). Moreover, the cost of retrofitting the vehicle is 40% less than buying a new one. It can also help you cut down on toxic emissions.

An idea sparked by childhood hobbies

Speaking with The Better India, Omkar says he was never inclined towards turning his hobby into a full-time business. “I joined a Thane-based software company in 2010 and commuted to work by car, covering a distance of 45 km. I used to spend a lot of money on fuel, and it was an unaffordable affair. I hated waiting in a queue for hours to fill CNG in the vehicle. I quit my job in 2017 to start a software company in Panvel with eight employees,” he says.

Omkar says that between his commute and regretting spending money on fuel, he started thinking of solutions. “Stuck in traffic, I used to think of multiple ways that could help reduce the fuel cost by replacing regular vehicles with electric motors. But the idea never materialised,” he adds.

“Fortunately, the company bagged a client from the USA, and we worked night shifts,” he says. As he remained free during the day, Omkar started working on installing batteries and motors on bicycles. “It is my childhood hobby to break down electrical components of toys and understand their mechanism. I started learning the principles of electric motor functioning and thought of implementing it in bicycles,” he adds.

After three successful attempts, Omkar shared his work with his friend Sachin Kale in Alibaug, a workshop owner. 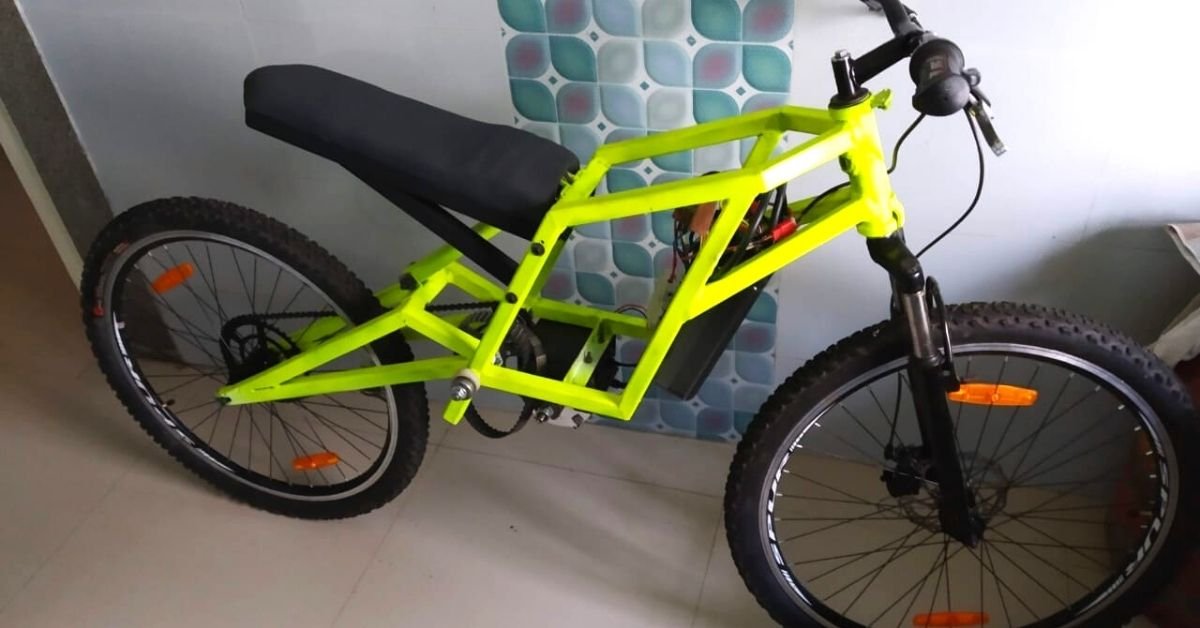 It was Sachin who pushed him to implement the mechanism on an Activa. “Omkar was pouring a lot of money into R&D. I had also worked on bike modifications a few years ago, but could not create a successful product and market it. I did not want him to repeat the same mistake and suggested we work on a product that could be monetised,” Sachin says.

In November 2019, Omkar bought a used Activa from the Kalyan market and started working on the vehicle. “The two-wheeler market is the biggest in India. Besides, the Indian mindset does not allow owners to sell off or discard their old vehicles. They’d want to use it in some way. I decided to tap on to that to increase reusability value,” he says.

He adds, “Players in the EV market follow similar practices, which are to purchase components from other countries and assemble them and create their product. I did not want to swim in the same waters. A well-performing electric two-wheeler costs at least Rs 1 lakh, and a petrol-powered vehicle is priced around Rs 80,000. I thought retrofitting could be a cheaper solution that would cost around Rs 40,000.”

Petrol to EV with the push of a button

Omkar says the reason for heavy imports is the poor quality of parts available with Indian vendors. “The motor, controller and other parts are not efficient, which puts them out of the competition. Hence, I started developing the parts required for the retrofit kit. But there was no reference for the same, which made me reverse engineer the components from the market, study them, and design components as required,” he explains.

He adds that he invested all of his savings and company profits to create the product. “I had no workshop and had to rely on external sources. The raw material could cost Rs 15,000, but processing it into a usable part in a workshop would cost additional Rs 30,000. During the COVID-19 lockdown, the employees worked from home and diverted the workspace rent amount of Rs 30,000 per month to create the parts,” Omkar says, adding that he spent almost Rs 30 lakh to create the kit.

He claims that around 85% of the components are indigenised, and the remaining are imported. “I plan to make it entirely indigenous in the coming months,” Omkar says.

Explaining the functionality, Omkar says retrofitting allows switching between the petrol and electric mode with a simple push of a button. “The switch installed along the ignition helps cut power from fuel and shift to electric mode. The vehicle has a 1,500 W motor installed at the rear wheel and a 72V battery pack fitted in the boot space. There is a separate accelerator wire installed that allows using the vehicle on both sources of energy. If needed, the kit can be easily removed, and the original configuration of a two-wheeler can be restored,” he says, adding, “The energy produced with a single charge is adequate for daily intercity commute.”

The vehicle, however, becomes heavy by 30 kilos, which includes a 15-kilo battery, about 8 kilos of motor, and other components. “The additional weight affects the mileage in the vehicle by 1%, but remains a cost-effective solution. Lower power batteries can also be installed, but will reduce the distance covered in the electric mode. The batteries charge in 1.5 hours with a fast charger, or 5 hours using a conventional piece,” Omkar tells The Better India.

Omkar clarifies that the arrangement cannot be called a hybrid vehicle. “A hybrid vehicle is one where the same engine gets powered by two different types of fuels. In a retrofit, the vehicle can be either run on a petrol engine, or on an electric motor,” he says.

During trials of the vehicle, the innovator became acquainted with SMARTECH and AUTOBAT, both battery manufacturing companies. “I frequently purchased parts from them, and they eventually asked what I did with them. When I shared the concept, they were impressed. The prototype was ready for them to take a ride. Satisfied with the performance, the companies decided to partner and invest in it,” he says.

In July 2020, Omkar received funding of Rs 1 crore, which he used to finalise the product, set up a 5,000 sq-ft facility in Panvel, and create 500 retrofit kits. “We have formed a company by the name of Autobat E-moto Pvt Ltd. and sell the kit under the brand name SMARTECH. The company has identified distributors and installation experts in Pune, Mumbai, Thane, Alibaug, Karjat and Lonavala,” he says.

“We have applied to ARAI and ICAT for necessary approvals. A nod from ARAI is expected by May 2021,” Omkar adds.

He feels the technology he developed is promising and has potential in the market. “EVs are entering the market, but there is still hesitation among buyers over its distance and inadequate charging infrastructure. Adding the retrofit kit to an existing petrol vehicle could be the most feasible option, as people can save a lot on fuel costs during daily commute. In case the battery dies, the user can quickly switch to petrol mode and continue the ride,” he adds.