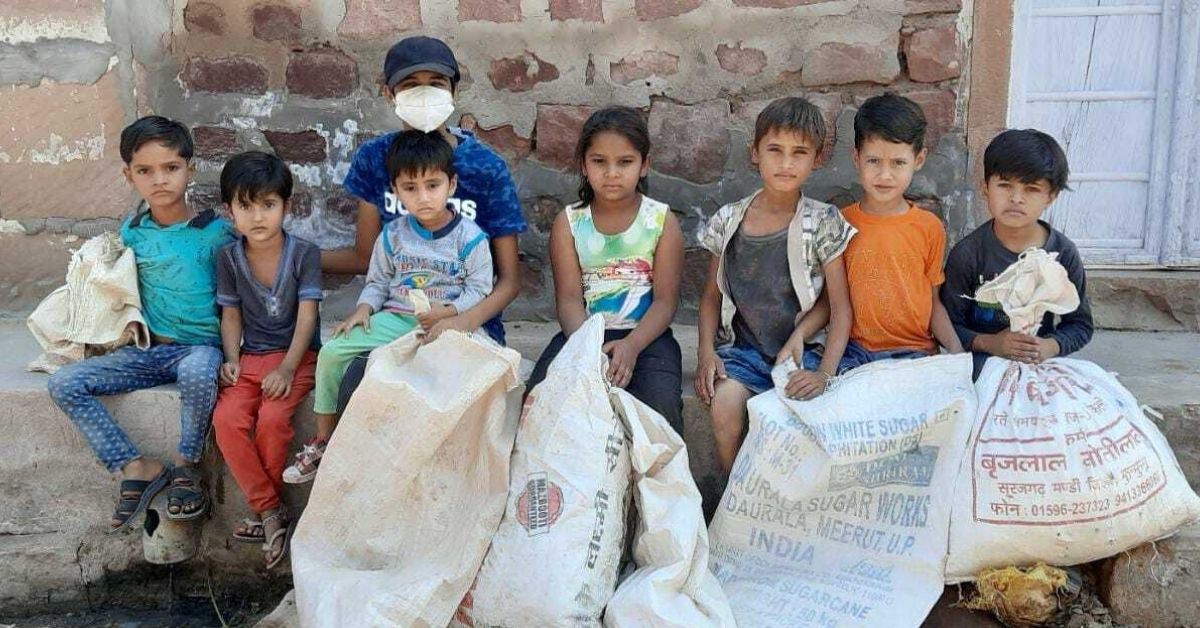 In just 50 days, Chesta Gulechha (18) went from being called the ‘mad city girl’ to one who has the potential to stand for the local elections contested in the village.

So, what did she do in 50 days to elicit such a drastic response from the villagers of Khichan, Rajasthan? She took it upon herself to clean and get rid of all the garbage that the villagers had left unattended for almost eight months.

Why a clean-up drive?

On 5 September, Chesta came to Khichan village to visit her grandparents and spend time with them. She had decided to take a year off from college, and thought that spending time in the interiors of India might do her good. “Little did I know that one decision of mine had the potential to change my life,” she says.

For the first five days after she arrived she went around exploring the village. What she saw was garbage strewn on every street, which made it very uncomfortable for her to take a walk. “The worst part was that none of the villagers seemed impacted by any of it. They went around doing their work, almost as though the garbage and the stench did not exist,” she says.

“I knew I would have to lead by example if I wanted to get anything done. And so on day five of my visit, I picked up a broom, some gunny bags and went out to clean the streets,” she says. For five days she was a spectacle for the villagers, who would without fail gather around to watch her clean. They called her the ‘mad city girl’, one who had lost all semblance of shame and respect.

“I ‘apparently’ belong to a caste that does not allow us to take part in any such cleaning activities. People from the village tried very hard to convince my grandparents to ask me to stay home. But my grandparents, in turn, urged them to come forward and clean the streets as well,” Chesta says with a laugh.

So, after five days of people standing around mocking, laughing, sneering at her, on day six, Chesta found support in Harshit Kumawat, Ramnivas Bishnoi and Bharat Singh, who decided to join her in her endeavour.

With these people by her side, Chesta started thinking of getting more people from the village involved in the clean-up drive. She says, “The first meeting we hosted had almost 17 attendees and that was a huge deal for us. There was so much enthusiasm in that meeting and with that energy we started more clean-up drives.”

For three days after the meeting, Chesta and the villagers who attended the meet cleaned the village with her. She adds, “It was at this time that we decided to hire four community cleaners from the village. With my family’s support, we started paying them Rs 400 for a day.”

Since the imposition of the lockdown in March, there was no one to collect the garbage. The few dustbins that were around the village were overflowing with waste. People were resorting to burning their waste and caused more pollution. “Often one person would dump their waste in a new place and soon that would become another dump yard. In this manner, all around the village, one could see many small but growing dumping grounds,” says Chesta.

With the help of the four hired cleaners, Chesta and her small team spent close to a month cleaning the village. “Even then I cannot say we cleaned up the entire village but we did clean a substantial part of it. With this drive, 95 percent of the village was cleaned,” she says.

Be the change you want to see in the world

“This wasn’t a timepass project for me. I was in it to ensure that I bring about or, at least, be the catalyst for a bigger change in mindset,” says Chesta. In wanting to put down processes that work, a door-to-door garbage collection drive was initiated. Speaking about it, she says, “On Monday and Thursday every week we have a tractor that goes around the village, blaring the Swachh Bharat Abhiyan theme song urging people to put their waste into it. This is the highlight of the entire drive and the villagers have taken to it very well,” says Chesta.

If this practice continues, Chesta feels that almost 80 percent of the garbage problem will be resolved.

The collected waste from Khichan village is sent to a nearby taluk, where a waste disposal and segregation system is in place, after which, Chesta adds that the local municipality takes over.

Beautification of the village

Along with ensuring that the garbage disposal system is streamlined, Chesta has also undertaken the task of beautifying the village. More than 50 walls have received a complete makeover with some stunning artwork, while another 60 plus walls have been adorned with clean-up slogans that will inspire the villagers.

“A team of three dedicated people, namely – Vikas, Jethmal, and Kuldeep, are the ones who have taken charge of the wall paintings and do it all free of cost,” she says.

“There have been so many challenges every step of the way. Whether it is people not taking me seriously because I am an 18-year-old girl or because they think it is their village and they know best,” says Chesta, adding that the village politics adds to her despair. Chesta has had to also battle some very age-old dogmatic practices to find a way to change things.

“They are very negative, and in all my door-to-door meetings, more than speaking about keeping the village clean I had to work on changing their mind-set. Getting them to see logic in every new initiative was difficult,” says Chesta.

Since the beginning of this initiative Chesta has spent nearly Rs 50,000 on ensuring that the village is free of litter and goes back to being beautiful. “This is what the local level government bodies should be doing. And since they are not doing so, I decided to take it up. After all, this is where my family stays, and I consider the whole village as my family.” she says.