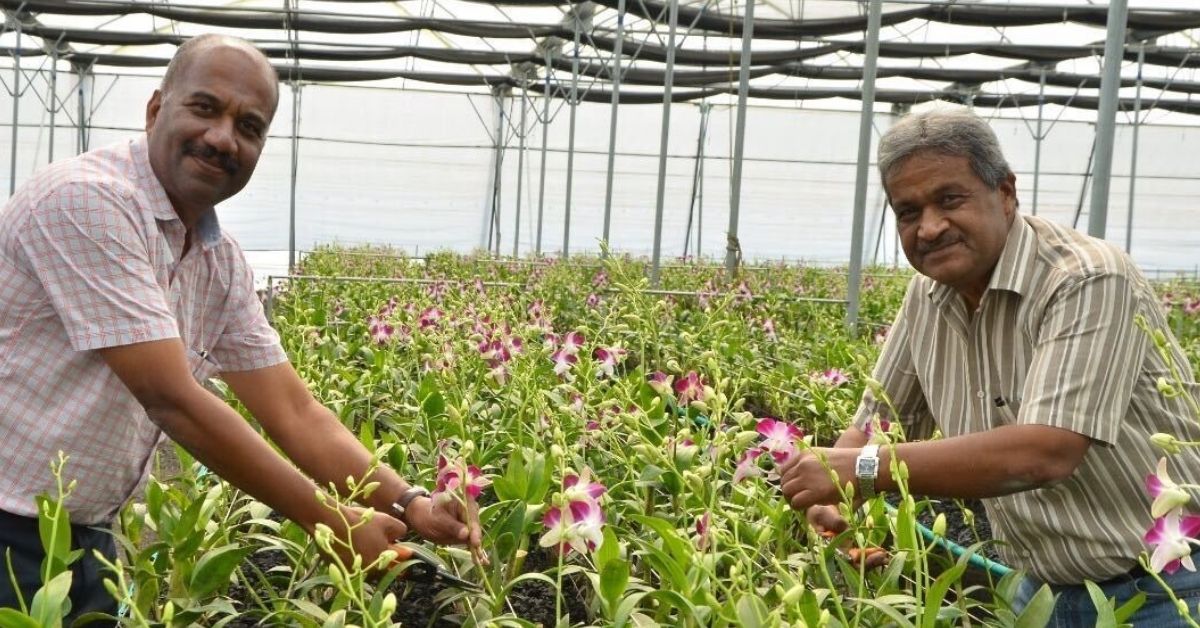 In 2016, Samir Badal, an industrialist in Telangana, started an orchid farm because he wanted to try something new and was always fond of growing plants.

Orchids are aesthetically pleasing flowers that are often used to decorate wedding venues in India. But, did you know that 80 percent of orchids sold in the country are imported from Thailand? Samir Baghat, a successful Telangana industrialist with a steel and iron manufacturing business, has decided to slowly change that by growing these flowers on his farm in Sangareddy district, Telangana.

Samir and his relative Praveen Gupta decided to venture into the agri-business because they wanted to try something new and were always fond of growing plants.

In 2015, they purchased eight acres of land in Sangareddy, which they named Mistwood Farms, and started to experiment with growing vegetables such as zucchini and fruits like pomegranate. However, the experiment failed because the soil was predominantly black and did not support the healthy growth of crops.

“In 2016, while thinking about what I could grow without soil, I came across a farmer in Raipur who was growing orchids and was reaping decent profits by selling the cut flowers in the local flower market. These plants are not grown in soil but in another medium made of cocopeat predominantly. So I decided to try my hand at orchids too and did research online about how I could grow them in Telangana,” says Samir, adding that he did 90 percent of his research on the internet and ordered tissue cultured saplings of the Dendrobium variety of orchids in various colours from Thailand.

The saplings were planted in pots with a mix of cocopeat and charcoal.

“The first few were a failure,” recalls Samir. “Either they did not grow or did not produce flowers. But, after further research and providing extra care in terms of humidity and moisture, within 45-days we were successfully able to produce flowers. The flowers need a temperature of 20 degree Celsius and humidity of 80 percent to grow. So, I approached the horticulture department in Telangana to request their help to set up a polyhouse, on my farm, to regulate the temperature conditions. I also explained about the process of growing it and how if done on a large scale, it could generate profit as there were not many producers in India,” says Samir.

After levelling the ground and setting up water drainage facilities, Samir set up his first polyhouse, with the support of the horticulture department, in April 2016. It was spread out across one acre and housed up to 50,000 pots of orchids.

Similar to greenhouses, polyhouses are plastic enclosures where microclimatic conditions such as humidity, moisture level and temperature can be controlled. These naturally-ventilated enclosures have shade nets, curtains and mini sprinklers, which are used to adjust the amount of sunlight, air, and moisture within.

Samir says, “We arranged rows of low-rise tables to place the flower pots on and fitted sprinklers to water the plants. The watering level is manually adjusted depending on the weather conditions. If it is a warm day, more water is required and on cooler days less water.”

Since the Sangareddy region is low in humidity, the polyhouses are necessary to grow these plants. That is what makes this a high-investment venture as setting up one polyhouse can cost Rs. 70-80 lakhs.

However, the produce was good and Samir sent cut flowers to the local market, which fetched an average price of Rs.10 per stem. Slowly, he was able to expand his business every three months and today he has eight polyhouses set up on the same farm. He grows only the Dendrobium variety of orchids but in a wide range of colours such as white, red, maroon, and purple.

After hearing about his success, Samir was approached by the Horticulture Department of Telangana to set up one polyhouse with orchids at their Centre Of Excellence located in Jeedimetla.

“I gladly agreed and did the same for them. I spent one year setting up the polyhouse, taking care of the saplings, and teaching others at the Centre about how to take care of the flowers.”

Sruthi Reddy, a representative of the Centre Of Excellence, who works in the flowers and vegetables department, says they now have one polyhouse that grows white and red Dendrobium orchids.

She says, “Mr. Samir has provided a new opportunity for other farmers in the state to grow this expensive but high-return yielding crop. Since 2017, we have been conducting regular workshops on how other farmers can also start growing orchids. The workshops include information on how to set up polyhouses, how to ensure they have the correct climatic conditions and use the correct medium. More than 5000 farmers from the district have attended the workshops.”

According to a news article, though the Horticulture Department in Telangana provides help to set up polyhouses and teaches farmers the cultivation techniques, most farmers do not take to orchid farming because of the high capital investment involved.

But Samir, after investing large amounts of money to set up his farm, says that it has been worth it because he is generating good profits. He sells 5000 cut flowers every day at an average of Rs.10 each, and 5000 potted plants to nurseries every month. Though he prioritises selling within Andhra Pradesh, when he receives special orders from other states they are either sent by air or bus parcel services. The furthest his orchids have travelled is to Jaipur for a wedding ceremony.

If you wish to place orders for Orchids, you can get in touch with Mr Samir at Samir@mistwoodfarms.com or Orchid@samirbhagat.in