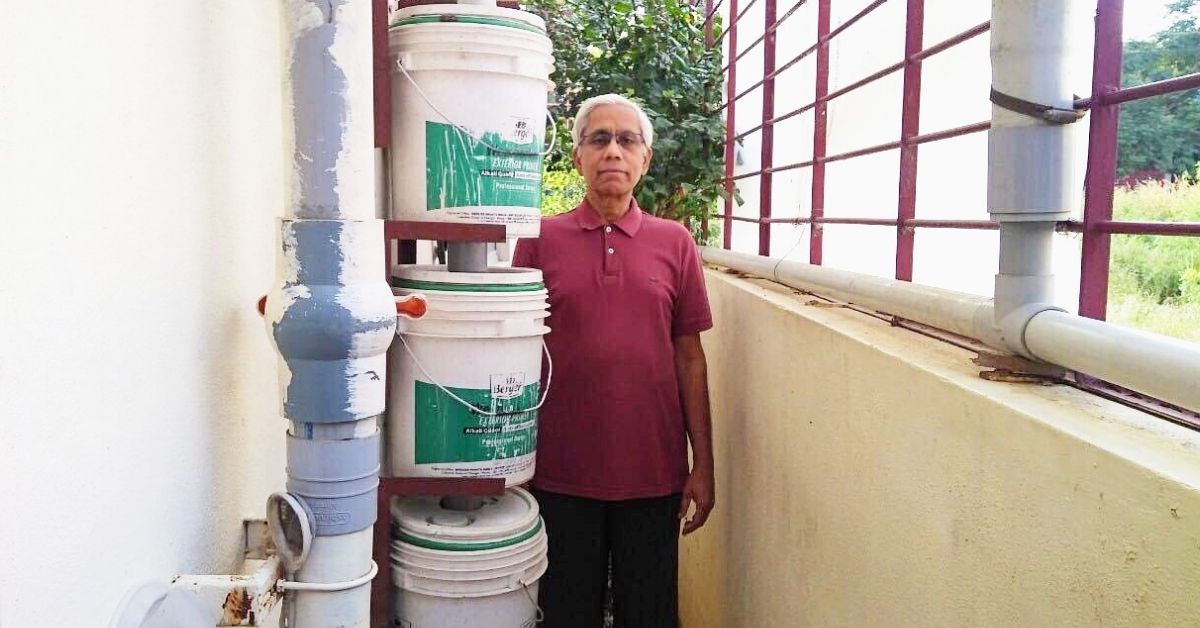 Sampath S is a 66-year-old retired banker who lives in Bengaluru. For the last six years, he has used only rainwater for his household purposes.

Sampath S is a 66-year-old retired banker who lives in Bengaluru. Six years ago, when he was constructing a home in Jakkur, he decided to install an underground water tank with a 40,000-litre capacity. That’s a lot of water. And the best part was that it is all filled with rainwater that he filters using DIY methods that work.

“Earlier, I was living in RT Nagar, where the Cauvery water supply was sufficient for all my needs. But, in Jakkur, the supply was unavailable, and I was in a situation where I had to either use bore water or purchase it from tankers. The latter seemed expensive and bore water was unfit for consumption as the groundwater level in that area had dropped to more than 600 feet. So I decided to harvest rainwater for both drinking and household purposes. But I took it up as a challenge, and decided to install it myself,” says Sampath.

Initially, he installed filters available commercially that had self-cleaning properties. But, those were not only expensive but also produced too much of rejected water in the process, and Sampath was dissatisfied. He then switched to a more manual method and used DIY filters made of cotton cloth or nylon cloth.

“These were high maintenance as someone had to be next to it every time the rains would begin. The cloth collects dirt in the water that flows from the terrace. This would need to be cleaned every 15 – 20 minutes; otherwise, the material would get damaged. Sometimes, if the rains were heavy, the pressure would cause the cloth to tear, and all the impurities would also flow into the tank,” says Sampath.

But, last year, after experimenting with several methods, he settled on an effective solution that provided water for not only household purposes but also potable drinking water.

To build an effective harvesting system, Sampath did a lot of research on the internet and understood the concept of filtering water from the terrace.

Using 20-litre paint buckets which were empty after the construction of his home, and mesh wires, he was able to build a filtration system from scratch.

The PVC pipe bringing water from the terrace ends 6 feet above the ground. Here, Sampath placed a T-Pipe which allows the water to flow in two directions. One, towards a soak pit that collects the initial flush water during the first 15 minutes of rainfall.

“This flush water has impurities that have accumulated on the terrace and inside the pipe. After 15 or 20 minutes, the value to the soak pit is closed, and the one towards the filtration system is opened up,” says Sampath adding that this is a manual process.

Three pairs of paint buckets were mounted on the wall with the help of L angle stands. The bucket’s lid has a hole inserted which allows the PVC pipe bringing water from the terrace to enter it. Here, an elbow pipe is fitted to allow water to fall in.

Two paint buckets of the same quantity are needed—one for water to enter and get filtered and the other for creating an outlet.

“The pipe carrying rainwater enters the bucket partially so that the water can fall inside with force. This pushes the impurities onto the sides. At the bottom of the inner-bucket, create four openings and make a slit along the circumference, one inch above the base to insert the mesh. On the outer-bucket, at the bottom, create a circular outlet for a PVC pipe to carry water into the next stage,” says Sampath.

How to place the mesh?

The mesh is cut to a size that is 1 inch more than the circumference of the bucket. By creating a slit at the edges of the bucket, the mesh is slid into the bottom. The extras hanging outside are glued to the sides of the bucket using industrial grade adhesive that will hold it in place. To ensure there are no gaps that can cause the water to leak, Sampath plastered M Seal along the edges where the slit was made.

In this stage, a mesh used as an insect or mosquito net can be placed. In the first level, the aim is to stop solid impurities.

The second pair of buckets, placed under the first one, has a different setup and uses filters on the sides of the inner-bucket. Here, even the mesh used is different.

Apart from having four openings at the bottom of the bucket, two large openings must be made on the sides too. Further, the mesh must be placed to cover these openings and sealed tight using M Seal.

While the first one has a mesh with bigger holes, the second stage has a mesh that is 75 microns. This helps to stop impurities that might have passed through the first bucket.

Sampath points out that it is crucial to use mesh that is made from 304 Grade stainless steel as that does not rust easily.

Finally, the water flows out through a similar outlet into the third bucket.

Here, the bucket is set up in the same way as Stage 1, but the mesh is 50 microns which has very fine holes and can stop small impurities like sand. Once the water passes through this filter, the outlet is connected to the underground tank meant for storing rainwater.

Sampath says, “The underground storage has a capacity of 40,000 litres split into three tanks which are interconnected. Once one tank is full, it will automatically spill into the next one. Apart from this, I have another 10,000-litre storage tank placed on the terrace that is connected to the underground tank using a motor.”

Maintenance: To ensure that the filter works effectively, Sampath suggests to remove the buckets and hose down the filters to remove the solid impurities. This prevents clogging in the future and clears out any insects that were filtered. He also points out that, keeping the terrace clean and regularly sweeping it also helps to maintain the filtration system.

While it is recommended to have three stages of filtration, one can even filter rainwater using the first two stages.

Mohan M, who knows Sampath through a common WhatsApp group got the two-stage filtration system installed in his home, a few months ago. Though he took the help of a plumber to get the system set up, he says that it did not cost him more than Rs. 20,000.

He says, “Though I have a 10,000-litre storage tank underground, I additionally installed external tanks of 5,000 litres to store the rainwater. To build the system, we first visited Sampath’s home to get an idea of what he is doing, and with his help sourced the necessary materials – mainly mesh wires – from suppliers in Bengaluru. The plumber followed Sampath’s instructions and helped us install the filtration system. Earlier, we would purchase tanker water, but for the last three months, we have been only using rainwater for household purposes, drinking, and washing my car.”

If you wish to install the system or know more about the process, you can get in touch with Mr Sampath here – sampaths144@gmail.com