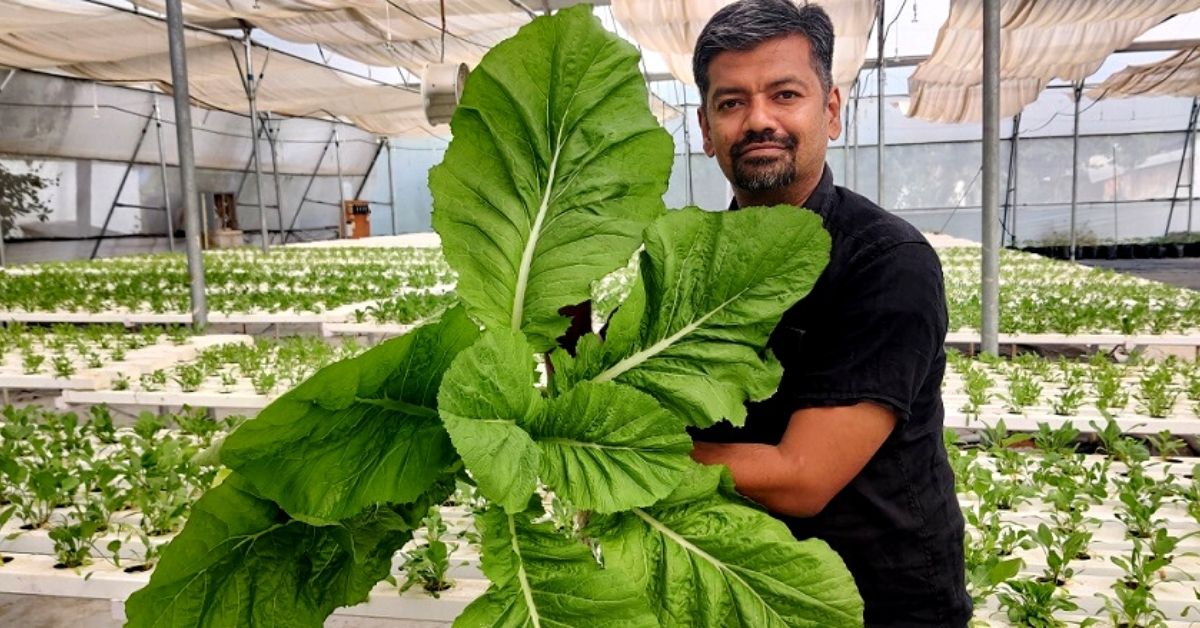 Moreover, through his venture, he provides gardening inputs to a regular customer base of 10,000 people.

Bengaluru-based urban gardener Manikandan Pattabiraman began his gardening journey in childhood — encouraged by his parents and grandfather. “I initially got into gardening when I was still a kid in the fourth grade. My family moved into a house on the outskirts of Chennai with ample space on the rooftop, and the ground. My father and I got into gardening actively,” recalls the now 40-year-old.

Manikandan’s maternal grandfather is also a farmer, and every time he visited the village, he visited several nurseries that further piqued his interest.

“The repository of knowledge grew over the years. I kept collecting seeds and grew plants, but in Chennai’s weather, most of them wouldn’t survive. So, in a way, you could say I killed more plants than I grew. But, I learnt over the years,” laughs Manikandan.

The IT professional began a blog — Geek Gardener — which now has several readers who regularly receive gardening hacks and tips.

Knowing his heart lay in tilling the soil and nurturing all things green, he quit his job in 2013 and started his venture — Hyperfarms.

Here, he began selling gardening inputs for kitchens and rooftops, DIY kits and has hosted workshops on farming techniques.

Manikandan also gradually picked up hydroponics, a form of soil-less farming, and has helped over ten people set up their commercial farms. They further helped over 5,000 people begin their gardens through the sale of their DIY kits and have a repeat customer base of 10,000 avid gardeners who buy inputs from them regularly.

Additionally, Manikandan has his farm set-ups across Bengaluru where he grows leafy vegetables like spinach, basil, neem, kale, arugula, Bok Choy, etc. using Hydroponics. Every month, they sell about eight to ten tonnes of these leafy greens to aggregators who sell to customers.

In conversation with The Better India (TBI), Manikandan shares how he built a profession by pursuing his passion.

Born in Chennai, Manikandan moved to study B.tech at Bharathiar University in Coimbatore. After graduating, he worked for ten years in the IT sector with companies like Oracle, Sonus Networks, and Mascon.

Having left his hometown for his studies, he lost touch with gardening during college years and this continued during his professional years until 2007. When he settled down in Bengaluru, he finally got the time and space to start gardening again.

“There was space in the terrace and balcony. I could finally maintain a kitchen garden, but at the time, finding inputs and materials to practice gardening wasn’t widely available online. I went to great lengths to find materials. And, I wanted to share this information and resources with other avid gardeners who could benefit from it. That led me to start my blog, ‘Geek Gardener’ in early 2008, anonymously,” recalls Manikandan.

Manikandan gained quite a few readers who often sent queries to him. “It was fun. People wrote to me as if I were a woman or a retired old man who is gardening. After a point, I did reveal myself, and a lot of my readers would call me ‘GG’ for ‘Geek Gardener’ and continue to do so,” laughs Manikandan.

In his terrace, he set up a 500 sq feet greenhouse where he began growing tomatoes, bell peppers, beans, papaya, and exotic greens like lettuce, arugula, basil, spinach among others. He also built a network of urban gardeners with whom he swaps seeds. There were times when he sourced the materials himself and made it available for them.

This led him to found, ‘Garden Guru’, a venture for the sale of gardening inputs.

Over time, after he became a more experienced gardener, Manikandan decided to try his hand at hydroponics — a method of growing plants without soil and by using nutrient-rich water solutions.

“The garden at the time was on the sixth floor. Carrying heavy pots and soil was extremely difficult. I wanted to use lighter materials, and that is when I looked at cocopeat. I tried this technique and the success really gave me a boost. This was a major upgrade from heavy pots,” smiles Manikandan who also began helping others experiment with hydroponics.

In 2013, with the birth of his daughter, Manikandan was at a crossroads where he had to decide if he wanted to continue with his IT career or decide to put all his energy into Garden Guru. “I saw potential in Garden Guru and quit my job to pursue it full time,” informs Manikandan.

Gradually, he also founded Hyperfarms in early 2017, a venture that helped clients set up their own hydroponics farm. In 2018, he decided to merge these two ventures under Hyperfarms Pvt. Ltd.

A True farmer at Heart

“There is something that I have observed over the years. People who garden, don’t share. Some who shared information never sold anything. And those who sold did not care. I wanted to share, sell and care. I am a grower first and want to provide the best materials possible for people who want to do gardening or set up their farms,” says Manikandan.

Currently, Hyperfarms has its own hydroponic farm set up which is looked after by a team of five including Manikandan. Vinitha Singhal, Manikandan’s wife, looks after the sale of DIY hydroponic, gardening and other inputs through the online ‘Garden Guru’ portal. His team sets up large hydroponic farms, while also looking after operations that involve setting up the rooftop and home gardens. Manikandan oversees all these different activities.

About five years ago, Bengaluru-based homemaker Arati Chawla wanted to start gardening and her friend recommended that she get in touch with Manikandan. Now, she is growing vegetables like okra, brinjal, tomatoes, lettuce, sweet potatoes, gourds among others in her terrace completely free of any kind of chemicals.

“They set up a 10,000 sq foot garden for me that has helped me grow my food. Sometimes the produce is so much that I have to share it with others. I am glad I learnt a new hobby, and with time, my interest and knowledge have just grown. I even share tips with other gardeners now,” smiles the 55-year-old.

Additionally, Hyperfarms has also set up larger hydroponic farms for people who are now entrepreneurs themselves.

Prasanth Ramachandran is the founder of Evergreen Farms which began its operations last year in August. The 30-year-old got in touch with Hyperfarms early last year because they wanted to have their own hydroponic set up where they grow fresh greens for retail.

One year into the operations, Prasanth informs that on his half-acre hydroponic farm, he is growing about 22 different varieties of greens like basil, spinach, Bok Choy, Japanese kale, amaranthus, rocket leaves among others.

These greens are sold in Bengaluru, Chennai and Mumbai.

“After doing a thorough analysis, we found that Hyperfarms would be the best people for setting up the farm. Even now, they are equally helpful with queries. They also point out foreseeable challenges so we are ready to face them,” informs the 30-year-old.

Hyperfarms also grows greens that are made available to people through other agro ventures.

Balakrishnan Dhathathri is an entrepreneur and co-founder of ‘Greenz’, a venture that sources fresh produce and supplies it to people in apartment complexes across South Bengaluru. At present, they are sourcing about two tonnes of leafy vegetables from Hyperfarms every month.

“The reason why we are sourcing from them is because of the good quality. Whoever we have supplied it to, has had no complaints to date. With our delivery logistics and their fresh greens, it is a win-win for us and also for the customers as they get produce which is delivered to them within three hours of harvesting,” he informs.

Following one’s passion doesn’t mean there wouldn’t be challenges to face and Manikandan shares with us the hurdles he has faced over the years.

“I think a lot of people have ideas about agribusiness but it is important to know what it actually entails before getting into it. When clients get in touch with us to set up their farms, we try our best to explain what one can expect. The challenge is to help them unlearn their old ideas and learn new ones,” expresses Manikandan.

He also informs that hydroponics as an agricultural practice is not something that needs more support and acknowledgment. “Although this technique helps in saving 70 per cent of the water used in conventional agriculture otherwise, we do not see a lot of people practising it. I wish there were more involvement and encouragement by other government bodies too,” he explains.

As a farmer, the other challenge he faces is that people don’t want to pay a little extra for food of good quality. But, he feels that by creating more awareness, this mindset can be changed. Moreover, looking for skilled farmers is a challenge, especially now that they are hoping to expand. Hence, they have started training programmes for these folks who can learn the basics before being inducted into the operations. He is also looking forward to training more people in hydroponics.

“I want to make the best-tasting fresh food available to people as a grower. Eating these should bring them joy as well as health. I also hope that I can enable more people to grow their own food by helping them set up their gardens and farms. With this, I hope to normalise agriculture and bring it back into people’s lives,” he says.