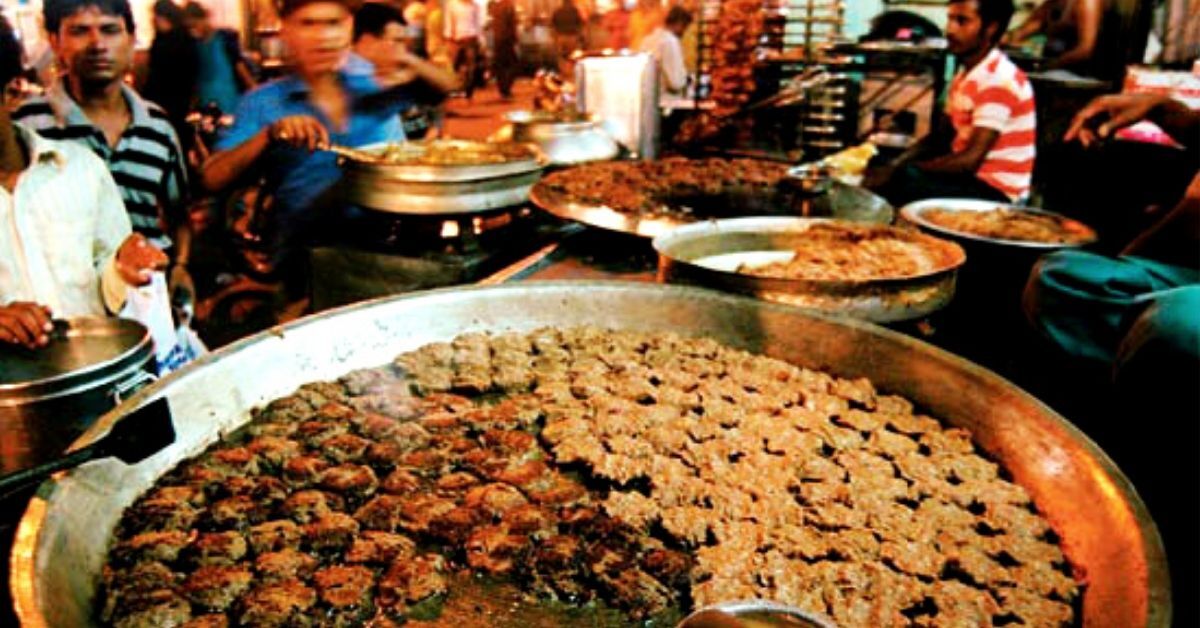 Love Shammi, Nargisi and Kakori kebabs? Find out how these delicacies got their names. And if that makes you hungry, we have included special kebab recipe straight from a mother’s kitchen!

Kebabs are tricky. And temperamental.

A pinch of extra nutmeg, or an over-generous helping of kachri (raw papaya) and you have lost the kebab already — stand by and watch in horror as it slowly disintegrates in the griddle.

Despite its many moods, this meaty mouthful of goodness is universally loved. So much so, that there are vegetarian — and vegan — kebab varieties, and it was one of the most ordered-in foods in India, during the lockdown.

There is something so comforting about the mix of spices and minced meat or veggies (take your pick) cooked slowly on low heat with an intermittent oil baste. The heady aroma of charcoal overpowers your senses while you can almost touch the heat of the spices warming the air around the kebab platter served with a little tomato rose garnish and a side of sliced onions.

Shami, Nargisi, Seekh, Galouti, Tunday, Kakori, Shikampuri, these are but a fraction of the aliases that the kebab goes by. Each recipe asks for several combinations of spices, at times as many as 160 (I kid you not).

But, how did the Middle Eastern coarsely-grounded meat roasted on skewers come to India? Who bestowed these names? Why was it pounded to within an inch of its life (so to speak)? What about the spices used?

I stumbled upon some interesting answers — some of them involving a one-armed chef, a toothless Nawab, an insulted host, and of course, swords.

The Entry of the Kebab In India

A kebab is simply a piece of meat roasted on a fire. Diced, flattened, minced and shaped, or with bone, kebabs come in several forms. If one goes by this definition then kebabs are indeed ancient.

The early people ate seared pieces of meat they roasted on a spit as many prehistoric artefacts are available in the form of ovens (fancy that) and charred animal bones.

While the Mahabharata mentions roasted meat, and the 11th-century Sanskrit text Manasollasa by the Kalyani Chalukya king Someshvara III speaks of pieces of meat roasted on a fire, the kebab as we know it sneaked its way into India from the Middle East carried by Turks and friendly emissaries.

The word itself has roots in the Arabic word kabāb which means roasted meat. The pattern seems easy to understand. It is just one of the easiest ways to cook meat! The soldiers hunted animals on their way and skewered them on the tips of their swords and roasted them on open fires.

Now that we have the etymologies and histories out of the way, we speak of the kebabs in India.

The famous skewer-roasted kebab (or seekh kebab) arrived in the subcontinent along with the marauding armies from Central Asia. And chefs embraced them with fervour trying to perfect these foreign recipes and adapt them to the masala-culture to please their overlords.

The Chefs in the Mughal Era Add Their Magic Touch

History has it that the Mughals loved their minced meat dishes. But, the kebabs still were of the chewier variety for the Turks like it that way.

Over time, Indian chefs changed the form of the seekh kebab and began sculpting it as a round patty. Here, the story of the Shami kebab deserves a mention.

Asaf-ud-Daula was the Nawab Wazir of Oudh from 1775-1797. He was fond of good food, but overindulgence had turned him obese, and his health began deteriorating further with him losing his teeth.

But, the meat-loving toothless Nawab had to be appeased.

The royal cooks — rakbdars — had already perfected their dum method of cooking, feeding more fragrance and flavour into their food. So now, they had to come up with something that the nawab could eat without having to chew.

“Shami kebabs are supposed to have been created in order to accommodate this problem. They were made out of finely minced and pounded meat known as qeema . . . They would grind the meat into a fine paste and then add ginger and garlic, poppy seeds and various combinations of spices, roll it into balls or lozenges, spear them on a skewer, and roast them over a fire. The resulting kebabs were crispy on the outside but so soft and silky within that even the toothless Asaf-ud-Daulah could eat them with pleasure,” writes historian Lizzie Collingham in her book Curry: A Tale of Cooks and Conquerors.

And Haji Murad Ali further perfected these kebabs, the chef extraordinaire who came up with the renowned Tunday Kebab.

“My grandfather broke his arm while flying kites on the roof, and lost the ability to use it due to the lack of better medical expertise. But, he loved to cook and even with that one arm, he was the fastest among his team in slicing onions! He minced meat finely to allow the spices to seep into it,” says Muhammad Usman, the current heir of Tunday Kabab, the iconic 115-year-old Lucknow establishment.

When Nawab Wajid-Ali-Shah tasted the melt-in-your-mouth patty cooked in ghee, he asked who had cooked them and was told — these were Tunday ke kebab. Alluding to the one-armed chef.

“The recipe is still the same. We add several spices, especially kachri (raw papaya) to tenderise the meat. It is also good for digestion and some of the old hakims (doctors) had told my grandfather to add this to the meat for its digestive properties,” adds Usman in conversation with The Better India.

Many Relatives of Kebabs — Nargisi, Kakori and Doner!

Kebabs have come a long way from their Turkish and Greek days. But a mango cannot fall far from its tree. The foreign cousins of Shami kebabs — the Doner and Shish kebabs —  are less spicier and chewier versions.

“Doners are layers of flattened meat which we stack in a conical shape and roast slowly. We shave off the outer layers which make shawarma! Seekh is again, coarsely ground or pieces of meat roasted on coals. The difference in Indian and Turkish seekh kebab is that we use red capsicum while grinding the meat. And it is less spicy too,” smiles Barış Şerefoğlu, the head chef at Al-Aziz Turkish Restaurant in Muscat, Oman.

Then, there’s the Kakori kebab, a cousin of the Indian seekh kebab. Made of finely minced meat tenderised by Malihabadi mangoes, Kakori kebabs came into being because of the slighted Nawab Syed Mohammad Haider Kazmi, a local aristocrat in Lucknow’s Kakori district.

When a British governor was invited over to enjoy the bounties of the mango season, he passed a deprecating comment on the coarseness of the kebabs served on the nawab’s dastarkhwan (spread).

Well, what do you know! The affronted nawab called all the rakabdars and khansamas and asked them to serve a better version of the seekh kebabs.

And this is how the Kakori cousin of the seekh kebab was born in a nawab’s kitchen.

As for Nargisi kebabs (boiled eggs covered in minced meat and fried), it seems that when you cut the kebab in quarters the yellow inside the white inside the meaty layer looks like the flower nargis (narcissus).

My Mother’s Recipe of Galouti Kebabs

Kebabs are incredibly versatile, with countless spices for flavouring and many types of meat available — goat, chicken, buffalo and lamb.

So, let’s try one recipe that my mother perfected after many trials and errors.

No, we do not use roots of vetiver or betel, the exotic pathar ka phool or even rose petals. And you add kewra only if you are adding fat. Be that as may, this recipe has stood the test of time. And whenever I try it, the kebabs turn out fragrant with the spices and taste just right due to the marinade.

Note: Use half a kilo of finely minced mutton for this recipe

(Dry roast the spices and grind once cool)

For the amazing charcoal smell:

Ideally, chefs add fragrance to Galouti kebabs with the spice blends, so don’t add green ANYTHING to it, i.e. coriander, chillies or mint (psst, these are for Shami)

Allow the meat to stay put in the charcoal-infused environment. Letting the marinade and spice blends tenderise it further. Perhaps for one hour.