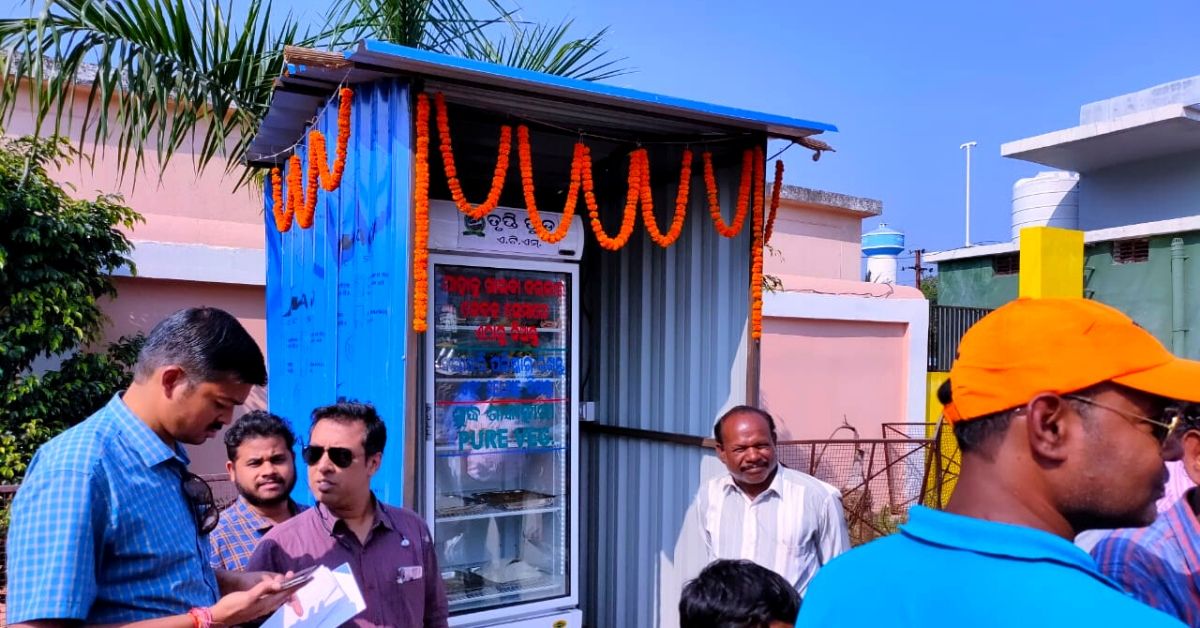 “The whole idea is to share with the community and also prevent wastage. If there are extra fruits and vegetables that you have grown in your garden, you can come and donate it here.” #Odisha

We all know ATMs dispense cash but, have you heard about ATMs where one gets food for free? Yes, you heard that right. Sambalpur district in Odisha is home to a philanthropic initiative helping the underprivileged people get access to food. A food ATM now stands at the District Headquarter hospital in the city from which the needy can collect food for free between 7AM and 10PM everyday.

Want some yummy and tasty biscuits with your cup of chai? Check out the range of biscuits available on Karnival

Named ‘Trupti’, the food ATM has a capacity of 700 litres and has been donated by Swaichha, a group of people residing in Sambalpur who carry out charitable work in the city. The ATM will be jointly maintained by Swaichha and the Municipal Corporation.

“The food ATM was inaugurated on 12 November this year. We are stocking it with fruits, vegetables and other small packed snacks like biscuits. We are not selling cooked food as of now,” explain Lingraj Pandu, Municipal Commissioner, Sambalpur. However, those citizens who are willing to donate cooked food can do that.

How does this Odisha ATM function?

“The whole idea is to share with the community and also prevent wastage. If there are extra fruits and vegetables that you have grown in your garden, you can come and donate it here,” says Dilip Kumar Panda, 40, the founder of Swaichha.

The food ATM is like a refrigerator set in an enclosure made with pre-fabricated aluminium sheets. It takes a day’s time to assemble a whole unit. People can stand in a queue and take out whatever they feel like consuming. Swaichha has many volunteers from colleges who take turns to supervise the daily operations.

“We are planning to employ a security guard and also install CCTV cameras for supervision,” informs Dilip.

Swaichha and the municipal corporation contribute the food to the ATM and at times, people donate food on special days like birthdays and other social gatherings.

A recent report by the Indian Council of Medical Research (ICMR), Public Health Foundation of India (PHFI) and National Institute of Nutrition (NIN) found that Odisha is among the top seven states to have the maximum disease burden attributed to malnutrition.

Such initiatives are welcome given that every little bit helps in improving the lives of the people who are mostly forgotten by the society.

Swaichha, the local initiative that donated the refrigerator comprises of about 35 to 40 people who pooled in their resources and collected about Rs. 50,000 to buy the fridge. However, this is not the first time Swaiccha has tried to fight hunger in the city.

The group of volunteers meet every Sunday and cook meals which are then served to about 2,000 people in crowded public areas like railway stations, bus stops, markets and temples. The reason why Swaichha’s founder Dilip got involved in social work is a personal one.

“My father was an orphan but he ultimately fought all odds and served as a policemen. He inspired me to carry on the legacy. This is just the beginning and there is so much to do,” he says.

Lingraj says that there are several voluntary organisations now that have gotten in touch with them and want to run a food ATM like this one in different parts of the city. He adds that this is not the first time that the state has witnessed such a food ATM.

“There is another ATM that has been installed in Kuchinda, which is a small municipality about 70 kms from Sambalpur. This one was inaugurated three days prior to the one in Sambalpur and even before that, there is another food ATM that was started in Bhubaneshwar which started a month ago,” says Lingraj.

“We introduced this to bridge the gap and the social disconnect that exists in the urban areas between the rich and the less fortunate. Hopefully, this brings about more responsibility among the people and that it is a constant reminder to share,” he says as he signs off.