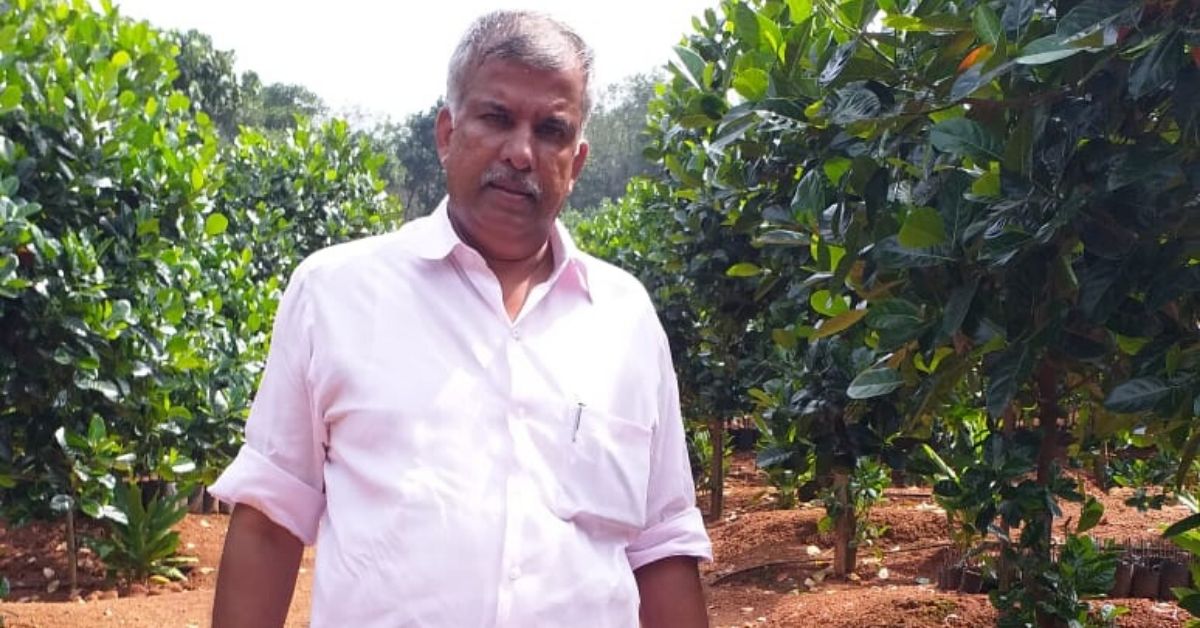 Villagers mocked Varghese Tharakan when he destroyed his 12-year-old rubber plantations to grow jackfruit organically. What happened next will surprise you

Armed with axes, a few men in Veloor Panchayat in Thrissur district, Kerala marched toward ‘Ayurjack Farm’—a flourishing rubber plantation along with earth excavators in the wee hours of the morning.

The chopping began. The destruction of healthy trees was inevitable.

Alarmed villagers and farmers gathered around the gory scene. Some concerned villagers ran to Varghese Tharakan, the owner of the Farm, to notify him only to realise that the owner himself led the execution.

Questions like, ‘Have you gone insane?’ ‘Are you sure you know what are you doing?’ ‘Do not destroy your life’ fell on deaf ears, as Tharakan continued the felling.

Agitated, some villagers even offered to help him financially assuming he was cutting the trees for money. Concerns soon turned to mockery and insults when Tharakan revealed the real reason behind the ‘insane stunt’.

People refused to take him seriously when Tharakan told everyone about his unique water conservation method that would prevent floods and solve water problems in the region.

Eight years later, the same people, who once hurled taunts at him, now visit Ayurjack Farm to replicate his farming model to grow jackfruit. Several experts and farmers from different parts of the country and the world visit the farm round the year for research purposes.

“It did not feel right that my five-acre farm would absorb all the groundwater and also the rainwater as rubber plantations consume a lot of water. The land is highly fertile and so I decided to utilise it more judiciously. Jackfruit, being the traditional fruit in my region, was my obvious choice,” Tharakan tells The Better India.

The uneven climatic conditions in the region was another motivation for the Kerala farmer to implement a water-saving method.

Tharakan’s model has eliminated not only his water problems but also of the neighbouring farms. Close to 35 wells, that were once dried up, are now full of water. He saves approximately six crore litres of rainwater every year that is enough to water 1,000 odd jackfruit trees in his farm round the year.

The panchayat dodged the destructive Kerala floods in 2018 by capturing each drop of rainwater into trenches dug in the fields of Tharakan and the other local farmers.

Tharakan’s plantation, which has 32 varieties of jackfruits, has been included on the preliminary list for WAFA (Water, Air, Food Awards), which recognises and promotes sustainable solutions that ensure safe drinking water, clean air and food for all.

His model has received the Shony Mitra award by the state for soil and water conservation and was even presented at the London School of Economics.

It was not an easy decision to let go of 12-year-old rubber plantations that yielded high profits and start planting jackfruits from scratch when he was in his 30s.

“With all the wells dried up, the farmers would either be left without sufficient water in case of a scanty rainfall or the farms would be destroyed due to torrential rains. We needed a strategy to take advantage of heavy rains and solve water problems,” says the 45-year-old.

After multiple trials to conserve rainwater and advice from the village elders, Tharakan finally came up with a rainwater harvesting model called ‘Underground Water Balancing System’ in 2013.

“The method is not rocket science,” says Tharakan, “All I did was dig shallow trenches in my farm by excavating the soil across the hill slope to let every drop of water percolate underground. I divided my farmland into elevated layers to ensure even distribution of rainwater. Excess water from walking paths is transported to the trenches every time it rains heavily.”

Trenches break the sloppy ground and therefore reduce the velocity of water runoff. As the speed of runoff is decreased, infiltration in the ground increases, thus preventing soil erosion. The result was apparent 2-3 monsoons later with recharged groundwater tables and filled to the brim wells.

Tharakan also reformed his farming technique by going organic, “The whole purpose of working for the environment would be defeated if I used chemicals and pesticides to grow jackfruits. So, I started preparing natural fertilisers.”

He dug pits in his farm and filled them with cow and goat dung, neem and cocopeat to make compost, “For every tree, I use around 3-4 kilos of dried compost as a natural fertiliser. It keeps the nutrient levels of plants intact.”

By switching to organic methods, the farm’s output became high.

Every year, Tharakan gets 100 kilos worth of jackfruit from each tree. To sum it up, Tharakan sells one lakh kilos of jackfruits annually.

To help others switch to organic farming, Tharakan sells eight varieties of saplings to people and farmers. At present, there are one lakh saplings thriving in his luscious farm.

“We do not export or sell saplings in the market or online. We only provide saplings to those who visit our farm,” he informs.

The best part about his varieties is the height of the trees which is anything between 7-8 feet where an average jackfruit tree is around 70 to 80 feet, “Due to the small height, my varieties can be grown in plots as small as 2 cents and also in houses.”

Tharakan now plans to collaborate with the state government’s agriculture and education department to spread awareness about his eco-friendly model and solve the water crisis. He also hopes to introduce his farming techniques in school textbooks.