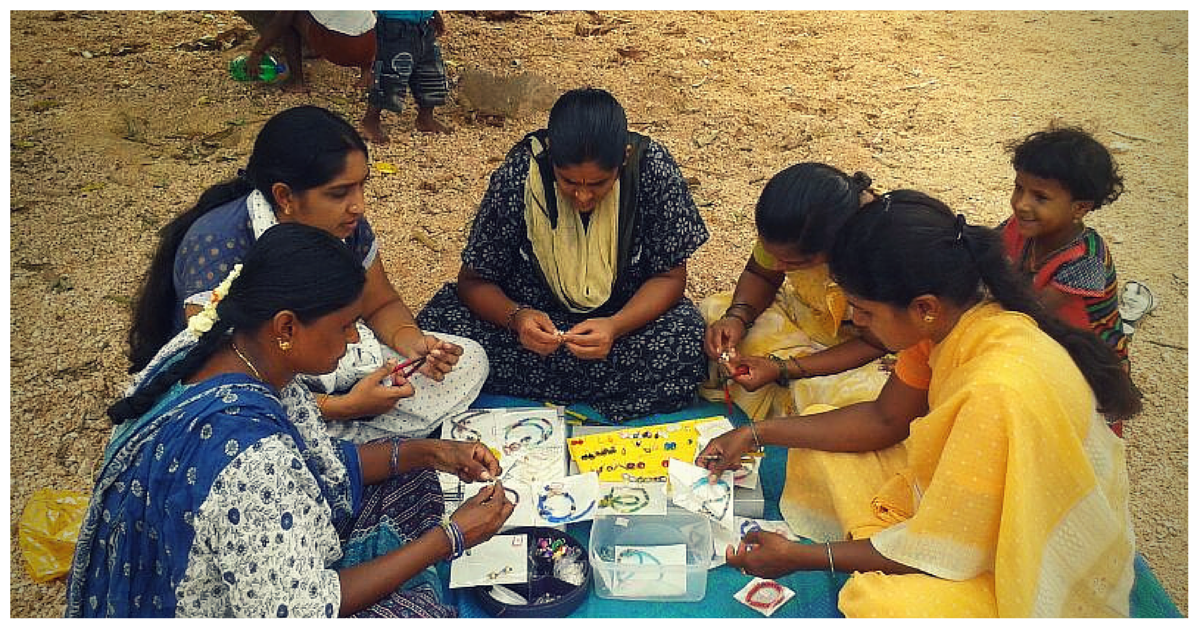 Here is how one lady transformed rural women into entrepreneurs who use Skype and run their own businesses. An inspiring story of change.

A similar obsession took over Kalpana Heblekar when she realised how much her idea of teaching women to make handicrafts could change their lives. Refusing to give away even the smallest opportunity that could change a woman’s life, Kalpana fervently taught craft to practically every woman she met. Even her bus and train journeys became craft training sessions and her handbag was a small stock room of raw materials needed to make crafts. “I might never meet these women after this journey, what if they can make their life better with this one skill!” exclaims Kalpana.

30,996 – That’s the number of women a fervent Kalpana has taught the skills of making handicrafts so far. And from these women, over a 1,000 small scale units have sprung up.

Women who were once rolling beedis and exposing themselves to serious health hazards are now running small scale units. Women who barely had enough to sustain their families are now exporting handicrafts that they make at home. From ordinary village women to entrepreneurs, their journey begins with a simple skill sharing initiative by Kalpana.

For Kalpana, it began as a way to keep herself engaged. Moving to Bangalore after her husband’s job change, Kalpana found herself at a loss for things to do. She gradually started teaching craft-making to women in her neighbourhood and began to sense the feeling of empowerment in these women. Her realization strengthened her idea and she started going to villages and imparting the skills. Since 1995, she has been travelling to villages from Varanasi to Kanyakumari, and extensively in Karnataka, under the banner of her company ‘Handikrafts Sourcing’.

She has covered over 80 villages in India and also travels to teach women in Africa, Sri Lanka and Thailand.

Kalpana has set up a model in which she sources hand made products from rural women and exports them to Europe and US under the brand name ‘Hasth’.

She and her team have come up with innovative products like bamboo T-shirts and banana bark products too!

Kalpana is clear that her women should be independent in all ways. She makes sure that the women who work with her open bank accounts, and only in their own names. Her ‘no-joint-account-with-husbands’ policy saves many of them from the raiding of their alcoholic husbands. She wants them to be independent, even from her own supervision.

Once Kalpana trains the women on craft making, women from the group are chosen as leaders on a rotational basis and Kalpana takes a step back. She knows the women can handle themselves and don’t need to be micro-managed.

Kalpana visits the villages as and when required and for the regular discussions, the women conference with her on skype calls.

She encourages the women to move out of her venture and start their own organizations as independent entrepreneurs. With her inspiration and guidance, 1,000 small scale units have been started. And there are many more to come as Kalpana, even after twenty years of good work, is not showing any signs of letting go of this obsession! We salute this amazing lady and her spirit of giving.

About the author: Ranjini Sivaswamy is a freelance writer and one of the first team members of The Better India. She comes from a mass communication background and is currently a consultant with IIM Bangalore.
Promotion