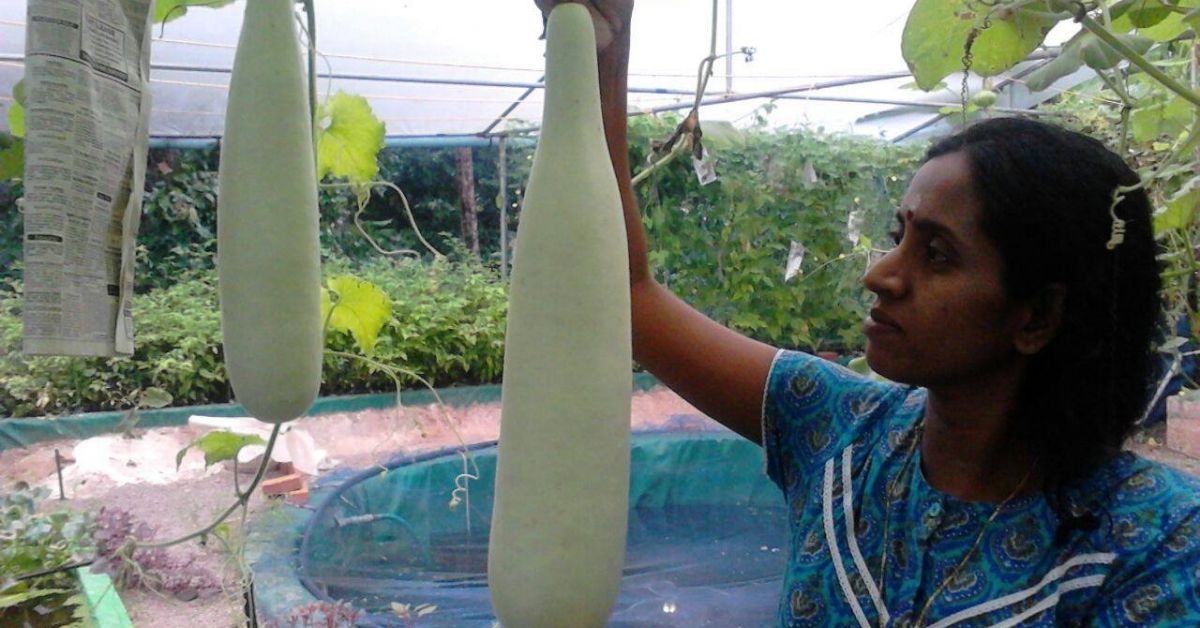 Quitting her job to start this initiative, Rekha has helped many people in Kozhikode adopt aquaponics in their own homes, something which once seemed impossible in the drought-prone area. #WomenEntrepreneurs

Organic farming is the trend of the hour as many individuals across India are choosing to grow their food, instead of bagging the pesticide-laden, hybrid greens from supermarket shelves.

However, Rekha Reshmik from Kozhikode, Kerala has pioneered a unique method of farming which yields double the profits as well as the harvest.

In her backyard, spanning no more than a few hundred square feet, she has implemented aquaponics⁠—a technique that connects pisciculture with organic farming.

Now set up an organic garden all by yourself. Shop from our 100% eco-friendly farm supplies and accessories.

In just five years, Rekha’s venture, Annapoorna Aquaponics, has grown by leaps and bounds and fetched her multiple awards. In fact, she is the recent district-level winner for modern fish farming.

Besides the accolades, she also earns a sizable monthly income alongside fresh, organic ingredients for her self-sufficient kitchen.

A graduate in Mathematics, Rekha previously worked as a software developer in Kozhikode. However, as her son was growing up, she found the corporate job inherently taxing and decided to quit. Soon, she started browsing options to earn from home.

“I have always had a knack for gardening and farming, so I started to look into traditional farming methods. I interacted with numerous farmers to learn how farming has been practised in our state for ages. At one point, goat farming piqued my interest,” recalls Rekha, in a conversation with The Better India.

It did not take her long to discover that goat farming was not an option for a one-person army like herself. Also, traditional farming would not be feasible in her area, which is affected by acute water shortage in the summer months.

Rekha did not allow his setback to let her down and started exploring other options.

“That was how I chanced upon a few YouTube videos and tutorials on aquaponics. The idea immediately struck a chord with me,” Rekha shares.

The origin of aquaponics can be traced back to ancient civilisations, especially in the history of the Aztecs and the Chinese. This type of polyculture farming traditionally combined the culture of common freshwater fish with staple grains like paddy.

In modern-day aquaponics, a growth bed for vegetables surrounds a fish pond of approximately one-third of its area. The ammoniacal excretory product of the fish is converted into nitrate by microbes via nitrification, which serves as a highly nutritious additive for plant growth.

The water from the fish pond is constantly channelised into the plant bed, and the vegetables grow faster than regular farming. The water is recirculated back into the fish pond, and the cycle continues.

“She has always been a very talented person. We have seen her pursue a lot of different things⁠—be it sand painting or goat farming. At one point, she had even bought three goats. Later, she switched to aquaponics and found her calling in it,” shares Rekha’s relative, Krishnankutty.

In June 2014, Rekha launched her solo aquaponics venture under the name Annapoorna Aquaponics. She mastered the method entirely on her own, her main tutor being YouTube videos of foreign hobbyists, and today, she conducts regular hands-on workshops to teach aquaponics to other enthusiasts across Kozhikode.

A board with the disclaimer “pesticide & chemical-free” welcomes people at the entrance of her farm. A fish tank worth 40,000-litre capacity houses over 4,000 Tilapia fish. A sub-immersible pump redirects water from the tank into several gravelled grow beds for vegetables.

The journey has not been a cakewalk for Rekha and her husband, Reshmik. First, the locals brushed her idea aside as a ‘joke’⁠—since aquaponics appeared to be a form of water-intensive farming, which would be difficult in a water-scarce region.

Then, due to additional power consumption required for the venture, Rekha ran pillar to post pleading agricultural officials for a farm subsidy. But, her limited farming space made her ineligible.

Finally, one of the officials termed aquaponics ‘a criminal offence’ and asked her to shut down her farm at the earliest.

The couple were at their wit’s end when as a last resort, Rekha’s husband decided to file an RTI query to know the status of their application.

“We found that our application was grossly misinterpreted by the officials, leading to all our hurdles. When we submitted the detailed guidelines of our operations, we finally received a nod from the officials,” recounts Rekha.

“Today, many people around us have adopted aquaponics in their own homes, which once seemed impossible. This is all thanks to inspiration from Rekha and her consistent guidance,” shares her neighbour, Shiji.

Rekha wishes to popularise her initiative throughout Kerala, where thousands of lakes and water bodies are lying unutilised or on the verge of encroachment. She believes that such a widespread endeavour will multiply the state’s produce, manifold.