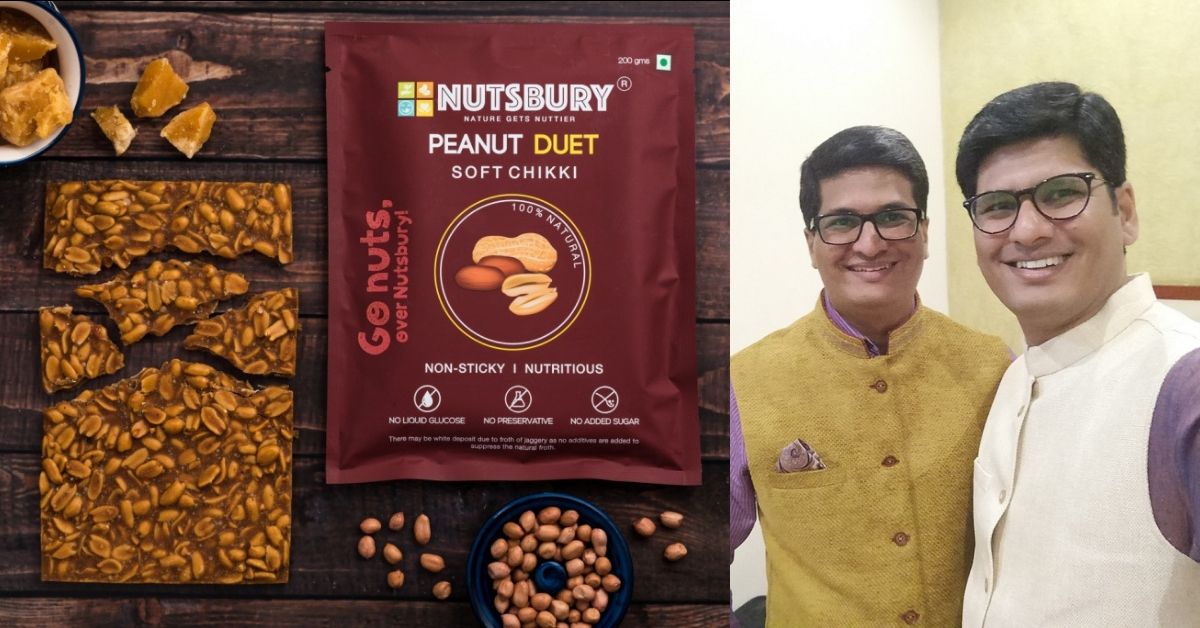 “We do not add liquid glucose or white refined sugar in it and hence they are healthy, natural and fit for fasting as well,” explains one of the founders.

Mintel, a market research company, conducted a survey in 2018 among 3,000 respondents to understand Indian consumer’s attitude to snacking. The survey revealed that almost 37 per cent of the respondents turned to snacking when they were stressed.

In a sea of endless options, it becomes difficult to calm your hunger pangs with healthier options when you can just turn to carbs or sugar. Not anymore! Meet the Kothari brothers from Pune who have come up with tasty and healthy options for our snacking needs!

It was while working as a Financial Analyst in Ernst & Young that Dhiraj Kothari began mulling over individual entrepreneurship where he could drive a change in the market in whatever capacity he could. The push came when his wife, Priti, expressed a desire to establish a library. Wanting to help her pursue her dreams and offering himself a break to explore the Indian market, Dhiraj quit his job in Bengaluru and shifted base to Pune, where his family lives.

With the support of their family, the duo set up their library — Books Meridian. Once the business began to prosper, Dhiraj left the management to his wife, and talked to his elder brother, Mahesh Kothari who had a keen business acumen, about his plans of setting up a business.

During their initial research, they found out that the Indian food processing segment was growing at a rapid scale and hence, decided to pursue this sector. After market research, they also gleaned that a lot of people were turning to healthier snacks, which were doing well in the market.

Thus, the Kothari brothers delved into the food industry together.

When they began experimenting with recipes, they did not have to look far from home. It was their grandmother’s recipe for all natural chikki that sealed the deal for the Pune-based brothers.

Their mother and grandmother had been making a healthier version of decadent chikkis at home since forever. “We ended up trying the family recipe to make soft chikkis for the benefit of anyone who is looking for healthy, natural and tasty product to snack on. We wanted to bring out a product that the customers would crave,” says Dhiraj.

Soon, the brothers started sharing the home-made chikkis among their friends to gauge their response. And they were not disappointed! The positive feedback propelled them to set up Nutsbury in September 2016 and they haven’t looked back since.

Nutsbury chikkis are made from natural and healthy ingredients like jaggery, nuts and seeds. Dhiraj goes on to explain what sets Nutsbury chikkis apart from the other options available in the market, “We do not add liquid glucose or white refined sugar in it and hence they are healthy, natural and fit for fasting as well,” he explains.

Once they came up with the final product and finalised the packaging, they wanted to test the peanut goodness among a larger customer base. For this, they went to farmers markets, flea markets and exhibitions.

“The customers fell in love with Nutsbury and have been placing repeat orders. We participated in Shor Bazaar, Zapalooza Flea, Tamboo market and many more. We were sold out in Zapalooza Flea and we took orders and delivered them home,” says Dhiraj enthusiastically.

Since then, Nutsbury has witnessed a steady increase in customers.

Hiren Kesariya, 31, a Software Engineer based out of Pune, already loved jaggery chikkis and the concept was not alien to him. These were widely sold in his hometown Akola, located about 10 hours away from Pune, and it was difficult for him to have access to these.

A year ago, while browsing through different websites selling peanuts and jaggery chikkis he came across Nutsbury’s products and tried them. Once he had tasted them, he knew he had hit the jackpot for authentic jaggery chikkis that tasted just like the homemade ones he loved and he hasn’t stopped buying them since!

I like that these chikkis because they are natural and unadulterated, comprising of only jaggery and peanuts, just how I like it. I went for these as they do not use glucose or sugar. I have severe teeth and gum problems. Not only are these chikkis soft, they do not stick to your teeth, explains Hiren.

Speaking about the benefits of jaggery, Sneha Singh, a nutrition expert says, “Replacing refined sugar with jaggery is the best thing an anemic person can do to improve their hemoglobin levels. Jaggery is the medicinal sugar and is packed with iron, eliminates toxins and promotes digestion. It is extremely beneficial in treating respiratory disorders, cold, cough, asthma, and chest congestion. It is a tradition to eat a piece of it after meals due to its digestive qualities!”

Despite the positive response that the product has received since Nutsbury started their operations, it hasn’t always been smooth sailing.

It was difficult for the brothers to understand the nuances of the food business as they did not have any background in the industry. But thankfully, their cousin who worked in a reputed food brand helped them follow all rules and regulations right from labeling to food testing of the product.

“There were a lot of things we learnt through trial and error,” explains Dhiraj.

Dhiraj also informs that since they add only jaggery, it leaves out a large section of people who find these chikkis a little on the sweeter side despite them being a much healthier option. To counter this, the brothers are launching more products which are slightly crunchier and less sweet.

Now that they have expanded in Pune and Mumbai, they also plan on getting in touch with retailers in Bengaluru and Delhi.

“We are happy with the health bar and chikki segment that we are working on. We plan to bring out more products in this range. In the end, we want to be remembered as a snack brand which is not only healthy but also tasty!” says Dhiraj signing off.

So the next time hunger pangs hit you at 6pm, reach for your selection of Nutsbury.