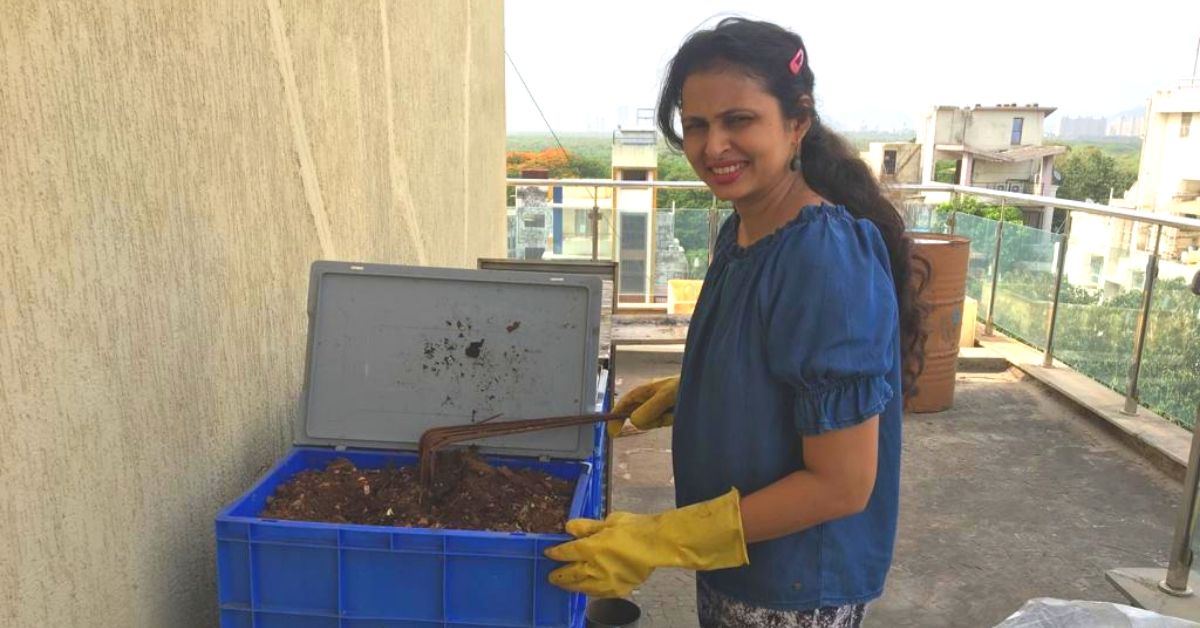 “Many people shy away from becoming eco-friendly because they feel it’s a time consuming and messy process. Despite being a mom, entrepreneur at home and responsibilities of taking care of my family, I barely spend 15 minutes everyday keeping my home green,” says Dr Reema Lewis. #LiveGreen #SustainableHomes #Mumbai

Meet Dr Reema Lewis, a physiotherapist and pilates trainer, who has turned her duplex home in Vashi, into a veritable green living space.

Born and raised in Bengaluru, she has always maintained a close relationship with nature and has a particular fondness for planting flowers and trees.

Interested in gardening? Check out some our eco-friendly in-house gardening tools here!

Post her wedding, she moved to the Mumbai Metropolitan Region (MMR) area helping its residents heal their bodies. However, she applied that healing to Mother Earth as well when she turned her home into a green living space.

“My husband and I decided to go solar back in 2010 when I was expecting my son. We had just bought a new house and thought that an eco-friendly home was the best gift we could give to him. One of the first steps we took was to install a solar water heater. All the bathrooms and kitchen are connected to the solar water system, and we use this water for bathing, washing veggies, cooking and drinking. I firmly believe that the earth can fulfil our needs, but not our greed. Everyone has to protect this earth for the next generation,” says Dr Reema, in an exclusive conversation with The Better India.

Four years ago, the family installed solar PV panels, and today, their entire home is powered by solar energy. Before installing solar panels, their electricity bill would touch Rs 10,000 per month, and during the summer season, it would go higher.

But today they have a 5 KW solar system.

“Thanks to solar panels we have installed with assistance from Magenta Power, a leading player in the renewable energy solutions and electric vehicle charging infrastructure sector, our electricity bills have come down to under Rs 1000 per month on an average. Sometimes, we only have to pay the minimum fixed charges of Rs 300. On non-cloudy days, I have no use for conventional electricity at all. All the lights, fans, air conditioners, refrigerator and even my clinic, which is located at my house, are powered by solar energy. The entire shift set us back by Rs 2.5 lakh, but it’s like paying the old electricity bill for a little over two years in advance, while we receive a lifetime of free solar power,” informs Dr Reema.

She also gave up her petrol-guzzling vehicle and adopted an electric car. While she used to pay Rs 9000 per month for petrol, today it’s less than Rs 500 because she had an EV-charging unit installed in her parking space, which in turn is connected her solar PV panels on the rooftop.

“Today, I have a Mahindra e2o and use it to travel within the city. The range of my EV, on a complete single charge, is above 100 km, and it takes about six hours to acquire 100 per cent charge. One day, I had even taken my family to Lonavala and back,” she says.

Aside from running her house on solar energy, Dr Reema has also opted for natural composting and vermiculture to make optimum use of the waste generated to fertiliser and used the same in her terrace garden to a variety of plants, including mint, papaya, pumpkin, and cucumber among others.

“My family generates quite a bit of kitchen waste because we all love to consume fruits and vegetables. While this waste is biodegradable, we also generate non-biodegradable waste in the form of plastic and glass. For the former, I have adopted natural composting, where we use the sun and microorganisms. I use this compost for my plants. For vermicomposting, I use a special kind of earthworm called the red wriggler. They can degrade the compost faster than standard earthworms,” she says.

She disposes her recyclable plastics to various organisations working with the same through an app, which sends people to her home to collect it. The non-recyclable ones are sent to NGOs who collect it on behalf of farmers to package their products.

Her objective is zero-waste, and she believes everyone can contribute to the same.

“Many people shy away from becoming eco-friendly because they feel it’s a time consuming and messy process. Despite being a mom, entrepreneur at home and responsibilities of taking care of my family, I barely spend 15 minutes every day keeping my home green. Being eco-friendly does not take more time. Every family should adopt an eco-friendly system at home be it in terms of solar power, natural composting or vermicomposting. There are also simple habits you can practice like carrying a cloth bag to the market instead of taking the plastic bag your grocery shop owner offers. I also source my milk directly from the dairy people,” she adds.

Dr Reema’s suggestions aren’t groundbreaking, but if all of us took a page out of her book, we will leave this planet in a better state than we found it. Moreover, her example has also shown us that in the long run, going eco-friendly will drastically reduce our cost of living.

These are advantages we can all get behind.