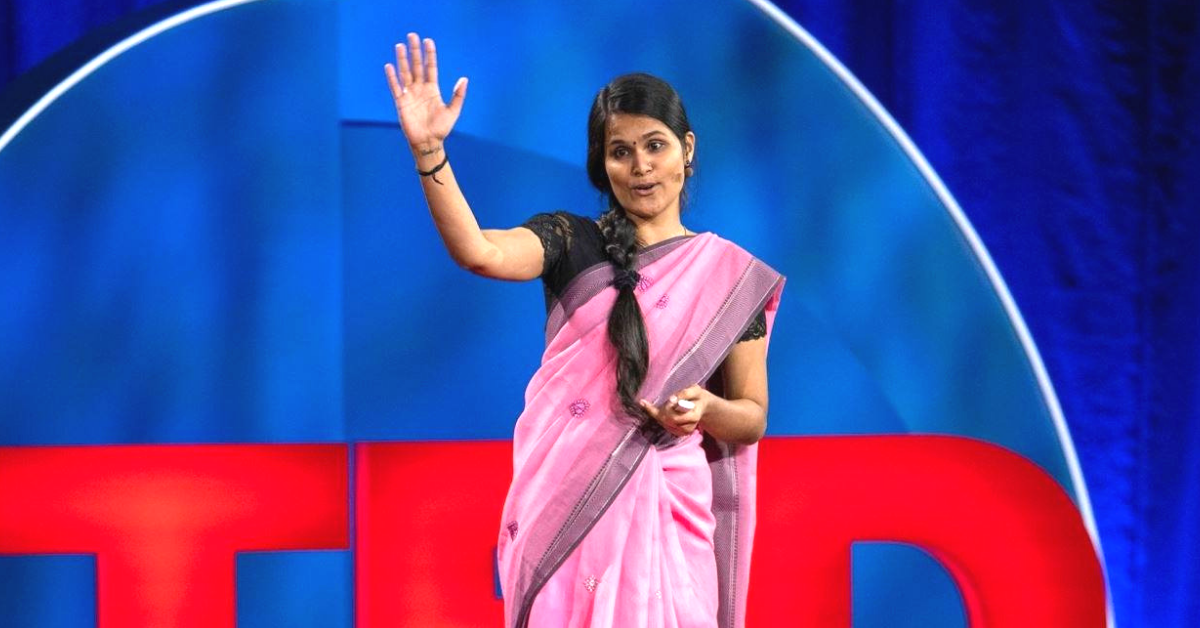 At 13, she happened to read the autobiography of Helen Keller and that was when she realised that the power to transform her life was not with anyone else, but rested completely with her.

The protagonist of my story was conditioned to believe three things about herself from a rather young age – Poor. Village. Girl.

This is a story of Ashweetha Shetty, who not just challenged that conditioning but has gone on to change her life around by 360 degrees.

In this exclusive conversation with The Better India, Ashweetha Shetty tells us how she overcame incredible odds to become a rural social worker, a Ted speaker, and the founder of the Bodhi Tree Foundation.

The third born to parents who rolled beedis in a small village called Mukkudal in the Tirunelveli district of Tamil Nadu, life for Ashweetha was anything but easy.

“I grew up with the belief that men raising their voice and even hand at women are common things. I never saw it as being a violation or even being wrong,” she says.

Ashweetha’s parents, like a majority of others in her village, were very poor, and having one more mouth to feed was not something they took to very pleasantly.

“I also learnt very early on in life that no one had any expectations of me. Perhaps that motivated me to do something meaningful with my life,” she says with a chuckle.

The fear of being married off after the completion of her school education was always looming large. Recounting those days, she says, “My elder sister was married off at a very young age and I think I lived in perpetual fear of meeting the same fate. Everywhere I went, people only spoke about marriage and prospective grooms.”

Books as an escape route

Ashweetha took to reading at a very young age. While she also started working rolling beedis, she kept books close at hand, and they became her escape from reality.
She says, “I started reading novels and slowly graduated to magazines. That was when I really started understanding the world outside my small village.

“I read about Irom Sharmila’s struggle and was very inspired by her.”

At 13, she read the autobiography of Helen Keller and realised that she alone, and not anyone else, had the power to transform her life.

“The more I read, the more I realised that I was living a suffocating life. I truly felt the need to escape it all,” she says. Reading a lot of Bharatiyar and the women was a help too.”

She tells me how she started learning English. “Barkha Dutt was one lady who immensely inspired me. I used to enjoy watching the shows she anchored. In fact, I would tell my mother that if I rolled ‘x’ number of beedis in the day, she should allow me to watch a Barkha Dutt programme. I also started following English because of those programmes.”

The Young India Fellowship is a one-year residential multi-disciplinary postgraduate programme which provides liberal arts education with a focus on experiential learning. Indians under the age of 29, with an undergraduate or a postgraduate degree in any subject, are eligible to apply for the fellowship.

Ashweetha shares, “When I sent in my application I was most certain of NOT clearing it.”

This, she elaborates, is because when she applied for the fellowship in 2012, she couldn’t speak English.

.
Once she cleared the initial stages, she needed to convince her father to let her go. “I understand his point of view now. That it was difficult for him to let me go to a place so far away, without any knowledge of what or how I would live,” she shares.

Having been in the village all her life, being in Delhi was a huge change for her. “It was difficult, and I realised that the differences between me and the others were stark, and if I intended to make it, I had to adapt quickly.”
Speaking about those days, she says, “I was like a mad-woman those days: cramming in as many English lessons as I could. I would sit until 4 a.m to complete all the assignments.

“My driving force was to ensure that I find my voice and a means to express myself in the class.”

All the classes were highly interactive and while she had many things to share, she often held back because of the language barrier. To overcome this, she worked ten times harder than the rest of her classmates.

Mother – a source of strength and support

With a great sense of calm, Ashweetha says, “When I was born, my parents were very poor. And I understand that my mother did not want to give birth to me. She did not want to bring me into the world and not be able to provide for me. She was very clear in her thought process.”
Despite all the struggles, her mother has always been a great source of support. “Even when I was applying for the YIF, it was my mother who pushed me. It was also a time when I had no idea about computers, the Internet, skype, and similar things.”

She’s very grateful to her progressive mother who only wanted her to succeed. “I am what I am because of my mother,” she gushes.

In May 2014, Ashweetha founded the Bodhi Tree Foundation. It is a non-profit organisation that aims to bridge the rural-urban divide by empowering rural graduates through soft-skill training, enabling them to take charge of their lives and contribute to the development of their communities through education, opportunities and entrepreneurship.

Bodhi Tree works primarily with first-generation rural graduates training them in English language, mentoring them in their careers and strengthening their life management skills.

Currently, the foundation reaches around 2,400 rural graduates through its programmes in Tirunelveli.

Ashweetha shares, “Communication is a key and I believe rural graduates can be trained and equipped to communicate with others effectively. Besides, we also work on developing their self-esteem, and empower them to make the right decisions.”

Because no one ever counselled her while growing up or even asked her what she wanted to do in life, she felt there was a void. Through Bodhi Tree, she hopes to fill that void for others.

She continues, “Perhaps if someone had taken the trouble to ask me about how I was, whether I was doing well mentally, what I intended to do in life, I might have had better clarity. A lot of my day-to-day reality impacted me immensely, also making me introverted. In starting the organisation, I wanted to help students overcome their economic, social, and cultural baggage.”

She concludes, “I wish that the birth of a child is celebrated, regardless of whether it is a girl or a boy. The celebrations must be for the new life that has come into the world. The day that happens, I will be happy.”

You May Also Like: Meet The One-Of-Her-Kind Chef Bringing Karnataka’s Dishes to Five-Star Tables