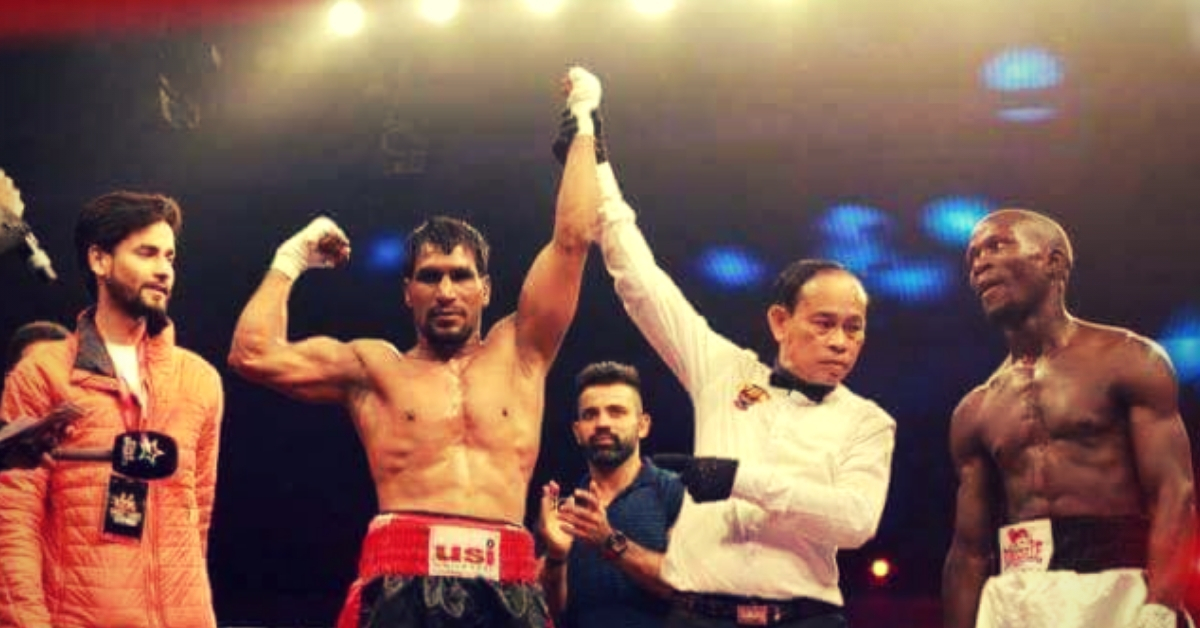 Despite running a tea stall from 5 am to 1 pm everyday, Rajesh Kumar Kasana hasn’t lost a single bout since 2015. His inspiration? Vijender Singh!

For a professional boxer, the journey often begins at the amateur level. With a state-backed ecosystem, these boxers go onto represent their country in tournaments like the Olympics, AIBA World Boxing Championships, Asian Games or even the Commonwealth Games.

From there, some boxers make the step up to the professional game, where they don’t have that state-backed ecosystem.

India’s most high-profile male boxer, Vijender Singh, went through a similar journey, earning accolades for the country (an Olympic bronze in 2008) before stepping up to the professional game in 2016 and signing up with the UK-based firm called Queensbury Promotions.

However, merely a few minutes away from the middleweight pugilist’s home in Bhiwani, Haryana, lives another pro fighter star in the making. His name is Rajesh Kumar Kasana, and he is popularly known as Lukka in the village. Unlike his idol Vijender, Rajesh went professional straightaway.

Despite his evident talent, Rajesh is struggling to make ends meet. According to a Times of India report, Rajesh runs a tea stall with his brother, and that has become his sole source of income. “I sell tea for Rs 10 and some eatables to earn my livelihood,” said Rajesh, speaking to the publication.

Waking up in the early hours of the morning, Rajesh opens his tea stall at 5 a.m. and operates it till 1 p.m. in the afternoon, following which his brother comes to take over. Following lunch and a brief siesta, he heads to a nearby boxing gym for practice.

He doesn’t mind the intense hustle for boxing glory because that’s precisely what his late father wanted. Speaking to the publication, Rajesh mentions that his father, a truck driver who succumbed to cancer when the promising fighter was in school, wanted him to become a professional boxer.

Rajesh has already gone on to fulfil his father’s dreams fighting his first professional bout in 2015, defeating Manpreet Singh, a silver medallist at the 2010 Asian Games.

Since then, he has gone onto fight another ten bouts, winning nine and drawing one in the lightweight category. He remains unbeaten—he is India’s best lightweight boxer and is currently ranked 221st in the world, according to the WBC professional boxing rankings in his weight category.

Like many great Indian athletes, life was very hard for the Haryana pugilist. A few years after Rajesh’s father passed away, his sister was diagnosed with cancer in 2011. Unable to pay for her treatment, the family was compelled to sell his ancestral property.

Despite their best efforts, she passed away in 2013. “I lost my father when I was in school. He was the backbone of our family. After his death, I left my studies and started driving. When things didn’t work out, I opened a stall after my friends gave me the suggestion,” he tells the Times of India.

Fortunately for Rajesh, he has Delhi-based Royal Sports Promotions in his corner, who has helped him get fights, pay for his boxing gloves, dietary necessities, and other daily expenses.

Besides success in the ring, Rajesh also wants to meet his hero Vijender. He did seek the Olympian’s help on one occasion, but busy schedules of the high-profile fighter came in the way. Nonetheless, he says that would love to meet him and seek his professional inputs on a sport that both of them love.