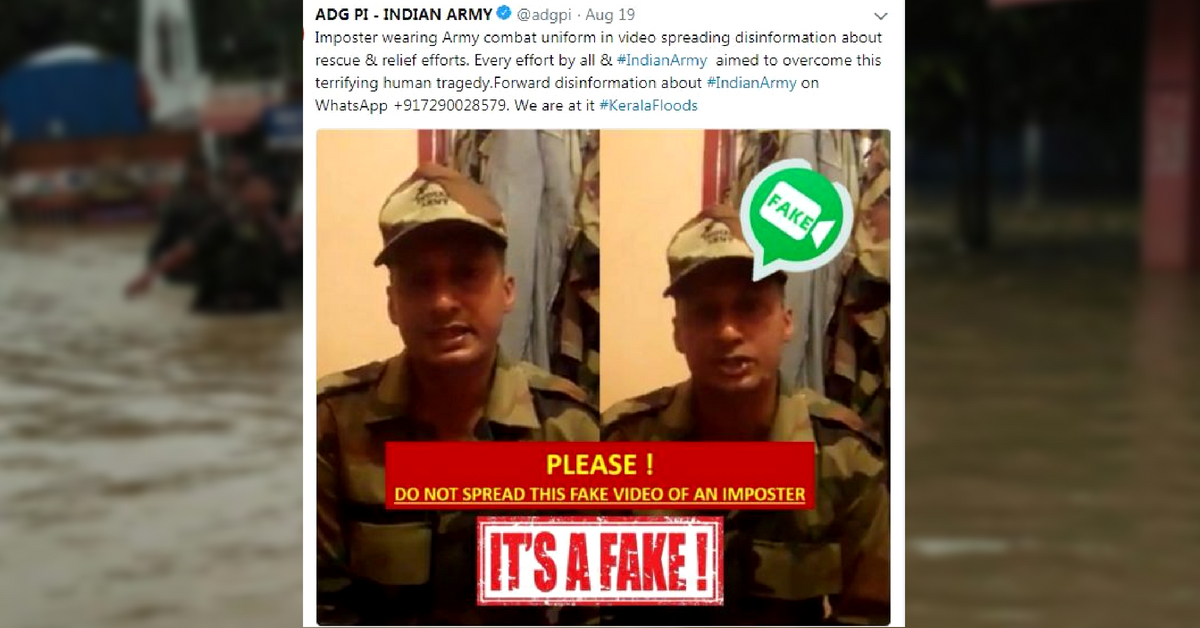 On the one hand, NGOs, concerned individuals and voluntary groups are tirelessly reaching out to people throughout the country and asking for donations in kind. But at the same time, there are those who have been trying to hamper this spirit of the country.

Even as Kerala is battling floods, thousands of Samaritans on social media have to battle myths for the benefit of the state. On the one hand, NGOs, concerned individuals and voluntary groups are tirelessly reaching out to people throughout the country and asking for donations in kind. The urgency to collect dry food, clothes, blankets and first aid medicines can be sensed in WhatsApp messages, tweets and Facebook posts. But at the same time, there are those who have been trying to hamper this spirit of the country. More accurately, they are an obstacle to a state which, as some reports say, will take several years to recover.

Here are seven myths that are doing the rounds on social media that you must stop believing. More importantly, these are myths that you can stop from spreading further.

1. That Kerala does not need food or sanitary napkins.

A friend of mine called me saying that a person from Kerala, named Suresh, has notified that Kerala has biscuits and sanitary napkins in excess and that the rest of the country is playing with their ego by sending such things. Suresh was claiming that only the rich and middle-class people are affected by the floods, people who can afford to buy such things. My friend believed the audio clip.

My simple question to him was, how does he fit an entire state in the bracket of “rich or middle class”?

If you too have received the audio in question, please be assured that this is not the case. Even as the flood waters are receding, flood survivors are in need of necessities. For an in-depth counter to Suresh’s argument, read this Facebook post by Sidin Vadukut here.

According to Scroll, the person in the video says, “I am addressing Kerala Chief Minister Pinarayi Vijayan. Why do you have so much animosity towards the Indian Army? Is it because your minister Kodiyeri Balakrishnan doesn’t want the Army to come to your state?”

You can share such misinformation concerning the Indian Army to +917290028579 on WhatsApp.

3. Onam has been cancelled.

Onam, as Faye D’Souza says, cannot be cancelled and you can celebrate the festival in your home without anyone stopping you. The Kerala government, rather, has postponed the government celebrations of the festival in light of the floods. True, many Malayalis will choose to not celebrate Onam as a form of respect to their loved ones and thousands of others who are stuck in the floods. But Onam as a festival is certainly not cancelled.

4. The Mullaperiyar Dam has developed cracks.

Tinku Biswal, an IAS officer who works as the Secretary of Water Resources for the Government of Kerala, has shed light on this issue. “Rumours are being spread in social media sites like WhatsApp, Facebook etc. that the Mullaperiyar dam has developed some cracks. This rumour is completely baseless, and the Dam has not developed any cracks as alleged,” she wrote, in a letter to the DCP & State Police Chief, Kerala.

You may also like: Why Are Kerala & TN Tussling Over Mullaperiyar Dam? Here Are 10 Things You Should Know

5. The Kerala State Electricity Board (KSEB) has shut down completely.

True, there are power cuts in many parts of Kerala. While this is due to the heavy downpour in some areas, the power supply has been deliberately cut in some flooded areas to avoid further danger. But, KSEB has not shut down completely.

In fact, employees are working day and night to restore electricity in the state. Putting their lives in danger, like P Raghunath who got electrocuted while working on a transformer, these dedicated employees are ensuring Kerala does not remain in darkness.

6. You can call the Navy helpline in case of emergency.

According to Mirror Now, there is no official Navy helpline. The Indian Navy does not take calls directly. If you need to call for rescue, you must contact the Disaster Management Authority.

The Kerala CM Office has published a district-wise list of numbers (below) that you can call for emergencies. These numbers might be busy when you call, but that’s only because so many people are trying to get in touch with them. Please be patient and brave, help is on your way.

Alert: People in the low lying areas along Chalakudy river and its tributaries are requested to move to higher locations as a precautionary measure. All stranded people are being attended by the forces in maximum capacity. #KeralaFloods2018 pic.twitter.com/6QWiTj2Guc

Some cybercriminals are taking undue advantage of this panic-stricken situation in Kerala and committing online frauds. Some might ask you to donate money on websites that direct the financial aid to their accounts while others are asking for personal information like Aadhaar number, PAN card number etc. Please note that none of your donations requires you to give out this information. If you are sceptical about a website asking for financial aid, please contribute to the CM’s relief fund directly.

The Kerala CM’s office, media houses and several organisations are trying to prevent people from hampering the funds meant for Kerala flood victims. If you are unsure about a certain post or news piece, please follow the Twitter accounts below for clarity on the same.