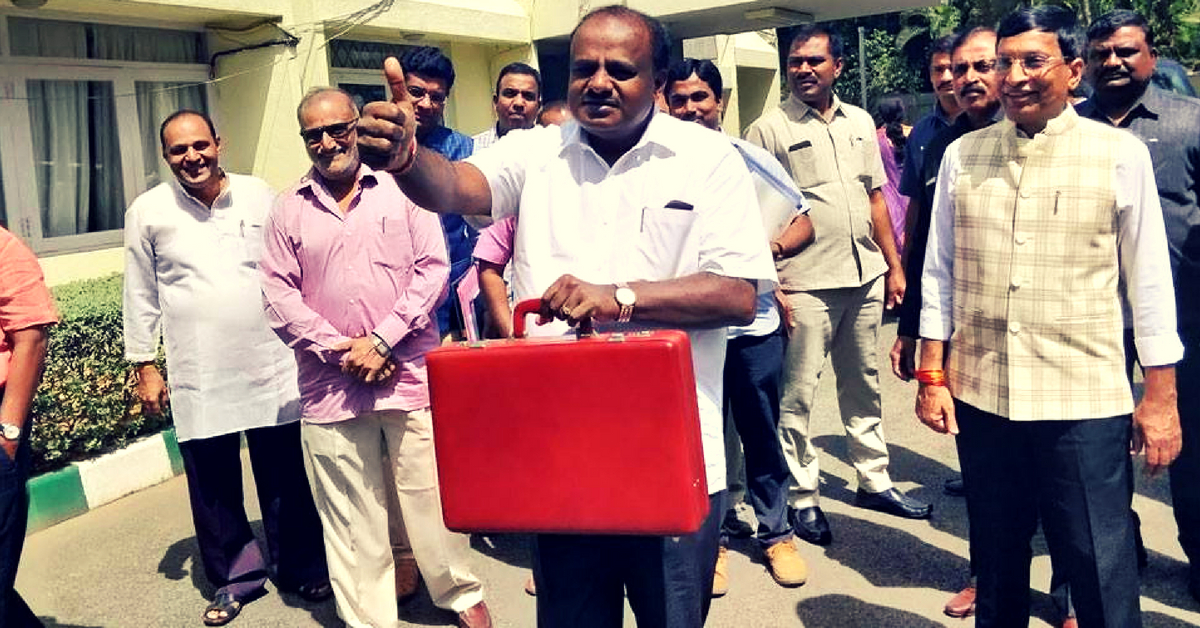 To facilitate farmers to avail new loans, action will be taken by the government to issue a clearance certificate by waiving the arrears from the defaulting account.

For the people of Karnataka, this year’s budget presentation is one of the highly anticipated events, with high hopes resting on loan waivers for farmers.

“It is a new experience for me as a finance minister. I have taken up this as a challenge to give a surplus budget,” said CM Kumaraswamy, who also holds the finance portfolio in the State Cabinet, reports Zee News.

Here are the top highlights of Karnataka Budget for the financial year 2018:

1. To facilitate farmers to avail new loans, action will be taken by the government to issue a clearance certificate by waiving the arrears from the defaulting account. In the first stage, defaulted crop loans of farmers up to 31 December 2017 will be waived. For this purpose, an amount of ₹6,500 crores has been earmarked in the budget. The loan amount will be limited to ₹2 lakh. Due to this waiver scheme, farmers will be able to avail of a benefit of ₹34,000 crores.

2. For farmers who have repaid the loan within time, a credit of repaid loan amount or ₹25000, whichever is less, has been motioned to encourage the non-defaulting farmers.

3. In a push for the expansion of metro rail services in the city, 95 km of additional road network is envisioned under the Phase 3. This covers 42.75 km from JP Nagar to KR Puram, 12.5 km from Magadi Road Toll Gate to Kadabagere, 3.07 km from Gottigere to Basavapura, 18.95 km from RK Hegdenagar to Aerospace park, 10.6 km from Kogilu Cross to Rajanukunte, and 6.67 km from Iblur to Carmelram.

4. An increase of tax rates on petrol from the present 30 per cent to 32 per cent and diesel from 19 per cent to 21 per cent has been proposed, which means that petrol prices would increase by ₹1.14 per litre and diesel by ₹1.12 per litre.

5. In order to compete with Chinese toys, the establishment of a cluster for the manufacture of toys in North Karnataka’s Koppal district has been proposed. Also, a new scheme called ‘Compete with China’ is to be launched in the state.

6. A special allocation of ₹150 crore has demarcated for repairs of government buildings such as primary and high schools, and Pre-University colleges. Also, for the development and repair infrastructure of government graduate and postgraduate colleges, a grant of ₹250 crore will be provided as a special package.

7. The budget aims at providing water from the Bellandur Lake for agricultural activities in rural pockets of Bengaluru through drip irrigation with private partnership. Known for its pollution, the lake has been given ₹50 crore for rejuvenation for its all-round development.

8. The budget has allocated ₹10 crore for the uplifting and development of various backward castes and communities like Shillekyatha, Dombidasa, Gowli, Heluva, Shikaries, Hoovadiga, Kanchugara, Darji, Kammara, Thigala, Budubudike, Badige, Hatgara, and Kareokkaliga. Also, training assistance for aspirants from SC/ST communities of competitive exams like UPSC, KPSC, and banking, in collaboration with a private training institute in Kalaburgi was mentioned.

9. In a bid to enhance skills and entrepreneurship, the state government will introduce a new scheme, Kayaka—under which zero per cent interest loans up to ₹5 lakh and 4 per cent between ₹5 to 10 lakh have been chalked down. Addressing the issues of street vendors/small vendors, Badavara Bandhu mobile service has been envisioned by the state across five cities.

10. A ‘phased’ increase over the next five years in the allowance of ₹6,000 for lactating and pregnant mothers under the Chief Minister’s Mathru Shree scheme has been announced.