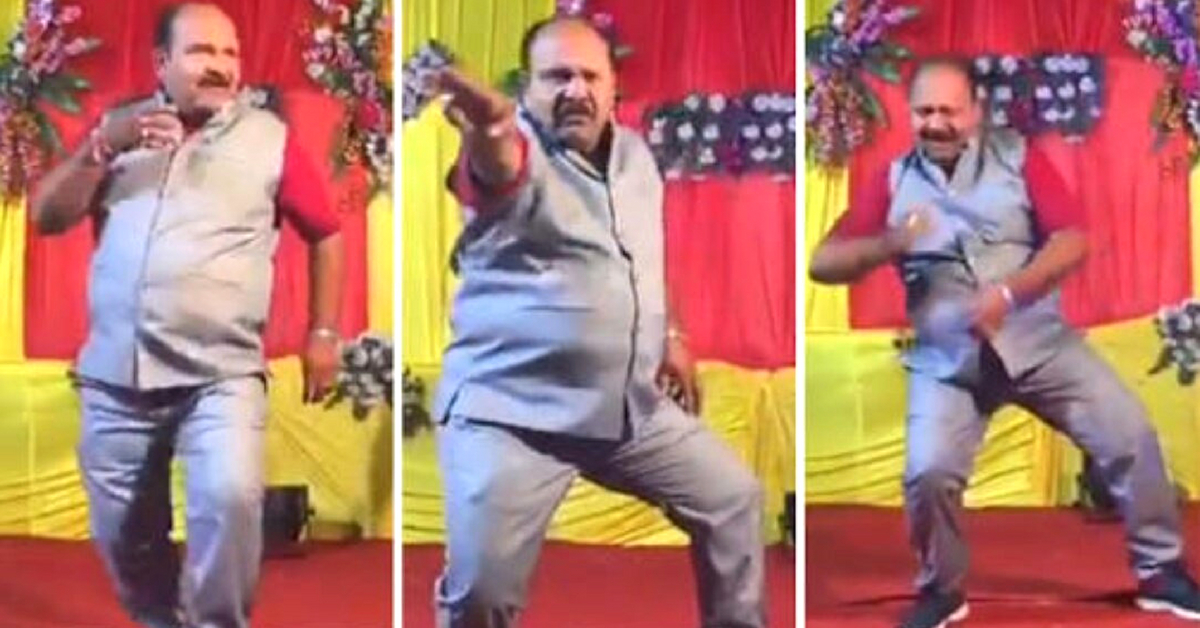 'Dancing Uncle', has become a sensation in India due to his slick moves and immeasurable talent.Image Credit:- Ambika

India’s latest social media sensation, is truly on fire and has amazed all with his terrific dance moves.

Social media is like a dry forest, and anything that remotely catches mass interest spreads like wildfire.

Sometimes, it does not take much to become ‘viral’; the cases in point being various social media sensations that have gone on to ‘break the internet’ in India over time. For example, the young girl (Priya Warrier) winking in a music video, or Dhinchak Pooja, the pop-star from Uttar Pradesh, who gained nationwide fame for her distinctive voice.

However, there are viral videos that end up showcasing someone’s hidden talent, and an example of this is the #DancingUncle video that has been doing the rounds recently. If you haven’t seen it, you have most definitely been living under a rock.

Anyone who has attended weddings in India will concur they are colourful and full of activity. While the attention is usually on the bride and groom, in this particular wedding, a guest stole the limelight. Following up on a dream long forgotten during the glory days of his youth, Sanjeev Shrivastava, in his dancing shoes, put on a performance that deserves a standing ovation.

Shrivastava, 46, hails from the Vidisha district in Madhya Pradesh and is an Assistant Professor of Electronics at the Bhabha Engineering Research Institute in Bhopal.

The Hindustan Times reports that Shrivastava has been dancing since 1982, inspired by his mother Mohini Devi Shrivastava, who was a classical dancer. With no formal training, he won Madhya Pradesh’s ‘Best Dancer’ award three times in the 80’s, at competitions held in Bhopal.

At his brother-in-law’s wedding in Gwalior on May 12th, Shrivastava was channelling the dancer in him, when someone shot the video, and Shrivastava is extremely grateful for that.

Shrivastava has been a part of several dance and theatre groups and has also been a special invitee on auspicious occasions in Madhya Pradesh, Maharashtra, and other states. However, he claims he has never thought of uploading videos on his own, despite hundreds of performances at many places.

Coming to the videos themselves, they are indeed a delight. In the first one, as the strains of ‘Aap Ke Aa Jane Se’, from the 1987 Govinda-Neelam classic ‘Khudgarz’ hits the ears, Shrivastava seems entirely at ease, having fun.

Has everyone in India by now seen this video of the amazing #DancingUncle (at a wedding presumably)? Insta, FB, WhatsApp, Twitter – no matter what platform I’m on, he’s everywhere! ? And I can’t get enough, he’s just too good! pic.twitter.com/h4TTHtSKlK

As the video progresses, he showcases a few interesting moves, and at around 40 seconds in; he goes full throttle. The video is a treat to watch—facial expressions on-point, Shrivastava goes through his many steps with finesse, confidence, and most importantly, has fun while doing it. You can hear the crowd losing it in the background, which is a testament to the man’s brilliance.

You may also like:- How an Italian Rebel Mastered Odissi Dance to Win the Padma Shri

In the second video, Shrivastava is rocking it out on a remix of “Chadhti Jawani”, totally acing his moves. The crowd is ecstatic, eating out of his hands. His energy is infectious, and he is clearly having a ball.

Shrivastava has awakened the dancer in everyone and has received immense praise from various people across India, including Shivraj Chauhan, the CM of Madhya Pradesh and Bollywood actor, Raveena Tandon. Now, maybe he can use modern technology to record some new dance videos, and follow up on his dreams!