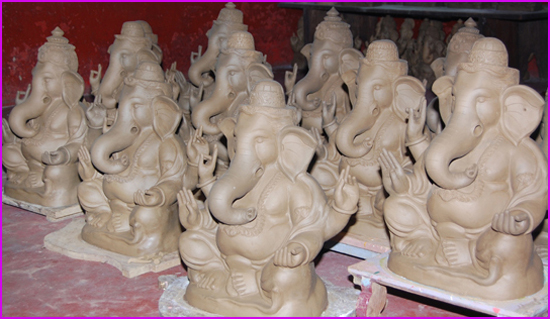 From reducing the cost of clay idols and banning PoP idols to spreading awareness and organizing various campaigns and workshops, this year both government and citizens worked hard to make Ganesha Chaturthi an environmental friendly festival. This is how they did it!

It was that time of the year again. The time when our hearts are filled with immense joy and adulation for our lord Ganesha and our nearby water bodies are filled with the idols which often take many years to degenerate.

Isn’t it strange that the lord who was born from mud and the sweat of his mother, the lord who is Janma Matipasun (born from the soil) and should go back to the soil, is now held responsible for huge pollution?

The concept of Ganesha visarjan itself is eco-friendly as it depicts Moksha and how everything eventually dissolves in nature. As per tradition, only clay idols of the lord should be worshiped and immersed in water. But today, like all other things, Ganesha idols too have been commercialized.

Gradually clay models have been replaced by Plaster of Paris idols with chemical and synthetic paints.  These idols do not dissolve in water easily and even reduce the oxygen level in water, killing fishes and other aquatic species.

People purchase PoP idols because they are cheaper and more easily available in the market. As these idols do not easily dissolve in water, the remains are collected by the local government body and demolished through a bulldozer, which completely fails the purpose of celebrating Ganesha Chaturthi.

Over 1.5 lakh idols are immersed in the Arabian Sea off the Mumbai coast every year, and the oxygen level in the sea falls by 50 percent immediately after the festival.

Many responsible citizens opt for eco-friendly Ganesha statues, but the number is very less. For a PoP idol costing Rs. 500, a clay one of the same size and design comes for Rs 900 – Rs.1000. So what can be done to solve the issue? We, of course, cannot stop celebrating the much-loved festival.

The sale of PoP Ganesha idols was banned by the State Government in Goa and people were urged to buy clay idols made by traditional artisans. The use of PoP in making Ganesha idols drastically declined from 35 percent a few years ago to 0.67 percent this year in Goa.

Other states also worked on ensuring a more environment friendly festival this year. The Delhi government demarcated designated areas for the immersion of idols, and appealed to the residents to use only those areas for Ganesha idol immersion.

“I urge you to use eco-friendly materials and non-toxic colours for making the idols, place flowers and garlands at designated sites on the ghats and avoid littering, avoid using any intoxicants,” Delhi Lieutenant Governor Najeeb Jung said.

As Mumbai is the largest buyer of the idols, Maharashtra Pollution Control Board (MPCB) took extra steps to convey the message. As people opt for PoP idols because they are cheaper, MPCB asked idol makers to make eco-friendly, clay idols at reasonable prices.

The manufacturers planned to cut the price difference, which was 50 percent last year, to 25 – 30 percent this year. Also, they increased the production of clay idols by 30 percent.

To spread awareness, MPCB rolled out various advertisements in television channels and local newspapers, organized workshops for people and trained them in the art of making clay idols to help them manufacture better and more environmentally-safe idols. Maharashtra government also launched a list of 67 vendors from whom people could buy Ganesha idols made out of clay.

The use of Shadu soil was encouraged. The idols made out of this soil are light-weight, have lesser metal content and are closer to traditional beliefs. They also dissolve in water easily. As per the report by MPCB 2013, PoP idols did not dissolve in water even after 15 days of immersion, whereas, the shadu idols dissolved within 30 minutes.

Bangalore was also not far behind when it came to going green. Bruhat Bangalore Mahanagara Palike (BBMP) planned to deploy over 20 staff members at the spots where Ganesha idols were designated to be immersed. BBMP also constructed tanks at the lakes for idol immersion and ensured that people do not pollute the lakes.

To help the government with its initiatives, many organizations came forward to spread awareness about eco-friendly celebrations. The Sankey Park Walkers’ Association, along with the zone’s executive engineer, appealed to the public to not littler the streets and throw bottles and other plastic items near immersion sites.

Getting the people involved

Many solutions have been proposed to address the issue, like using a permanent idol made of stone or brass which can be used every year with a symbolic immersion. Also, immersing the clay idol in a bucket of water at home can also bring down the volume of pollution in the lakes and seas.

Youth for Seva, through its initiative that reached out to 50 government schools and 30 slums in Hyderabad, taught students to make clay Ganesha. Also, The Rotary Club Vizag Couples distributed free clay Ganesha idols to the public at Vishakhapatnam. To Make A Difference had been extensively promoting clay Ganesha idols and delivered the eco-friendly idols to people’s doorsteps.

Mahesh, from JG College of Commerce, Hubli spread awareness about eco-friendly celebrations by distributing information pamphlets and going to door-to-door requesting people to do visarjan in a bucket of water without polluting the lakes.

For some, the festival is much more than just immersing the idol. They prefer to make the idols with their own hands. For those few, here is the DIY guide to make your own Ganesha.