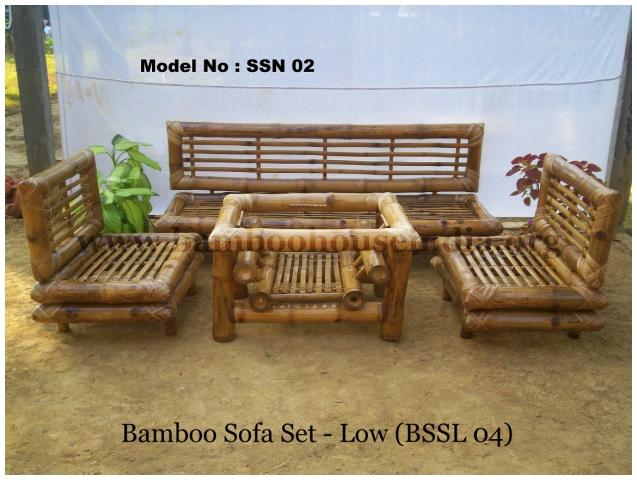 So what are the options you look at when you go out to buy furniture? Wood, metal, even plastic? How about getting home some bamboo furniture the next time you go shopping? Not only will you be making an environmentally friendly choice, you will also be providing employment opportunities to millions of rural and tnribal artisans living in abject povevrty in the bamboo belt of India. Thanks to the research and efforts by two young entrepreneurs, Prashant Lingam and Aruna, this is now a possibility.

With the idea germiating from their own search for an eco-friendly furniture option, Bamboo House India came into being officially in May 2008, after the founders spent about 9 months on study and experimentation. In this time, Prashant and Aruna Kappagantula were exposed to the miserable living conditions of the bamboo artisans of North-East India and decided that the aim of their enterprise would not only be to create a space for bamboo in the Indian furniture market, but also to generate employment for 5 million artisans. Lofty as it might sound, they went ahead and created a tangible business plan which included building expertise and spreading awareness about bamboo and its uses, creatively utilizing bamboo in multiple scenarios including furniture, structure and flooring, and setting up a chain of bamboo showrooms all across the country for retailing the products created by these artisans.

Their journey towards creating “green livelihoods” was not an easy one. There were several hurdles faced by these entrepreneurs, and not just from one source. Firstly, there is not much information available on bamboo and its properties and uses, and the duo had to almost start from scratch and build their own data bank through study and experimentation. They lost almost 4 lakh rupees on bamboo furniture they built initially because they were not aware that bamboo traps moisture and cracks. They gained a lot of knowledge from the artisans in North East who have been in the trade from centuries. However, communicating with these artisans and uniting them under one banner posed its own callenges. The severe lack of infrastructure in the areas where they reside caused great delays in execution. It sometimes took 25 days for the furniture design to reach the artisan by post, and he had to travel 40kms to inform Prashant or Aruna that he had received it. The provision of mobile phones, the internet and cameras has eased the situation now.

Not the least of the problems was convincing the government authorities and finding support for the venture. After considerable persuasion, Bamboo House India managed to get support from Confederation of Indian Industries (CII-Hyderabad) for setting up the stores, starting the first one in Hyderabad. They have also partnered with institutions like IIT-Delhi, National Institute of Design and National Mission on Bamboo Application to set up model homes and instill confidence in the utility of bamboo. Aid from entities like IL&FS and APTDC went a long way in providing the impetus and helping them to spread the word about their work.

Prashant and Aruna have great plans for the future. They hope to set up 3-5 exclusive bamboo outlets in the next 3-5 years and also expand into niche segments like bamboo flooring and clothing. We wish them luck and encourage you to support their cause by visiting their store today. Find out more about them on their website: http://www.bamboohouseindia.org/