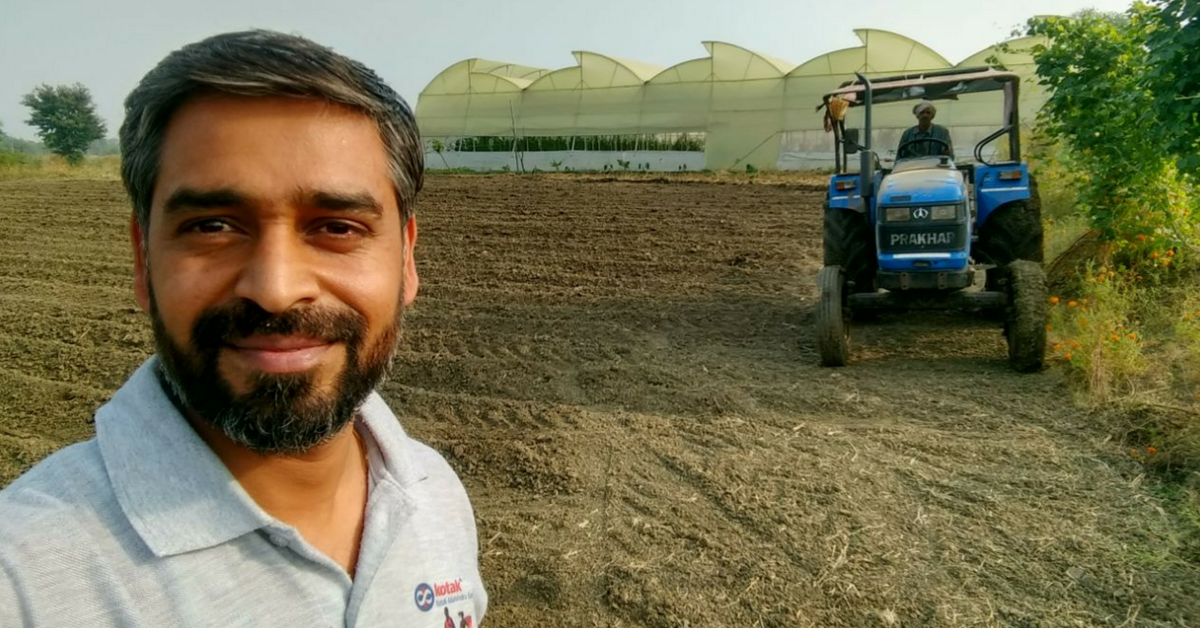 The team also gets offers from their customers who own land to use it to farm.

Prateek Sharma was born to a family of farmers in a village close to Bhopal, Madhya Pradesh. He started farming at the age of 10 along with his family but moved to Bhopal after class 8 for higher education. A few years later, Prateek – the boy from a small village, was appointed as a chief manager of Kotak Mahindra Bank.

After 10 years of banking, he earned a good pay and had a comfortable life. He even married Prateeksha, who also worked at Kotak.

But, Prateek could not continue the corporate life with ease, as his heart was always in farming.

“When I visited my village after 20 years, I realised that everyone was moving out of the village but no one was going back. While the cities were developing at a high pace, the village remained where it was 20 years ago,” says Prateek.

He worked as a banker on weekdays and fulfilled his passion to farm on weekends, travelling a 100 km to get to his 5 acre farm in Dhaba Khurd.

By the end of 2015, Prateek had set up a poly house on his farm to grow exotic and off season vegetables. Prateek thought he would quit his as a banker once he was able to earn enough from farming, but this was not an easy decision to make as the income from sustainable farming was not much.

He realised that this was because input costs to grow these vegetables were very high, coupled with the fact that farmers were not a part of the value chain and hence could not decide the price of their own vegetables.

“If something was being sold at Rs 10, the input cost was close to Rs 6, which is too high. The quantity of chemical used was very high too. In the first cycle of growing tomatoes, I spent Rs 26,000 alone on chemical fertilisers. And then there are chemical insecticides and pesticides. ” said Prateek.

According to Prateek, farmers also have to pay for the transportation of their vegetables and grains to the Mandi. And when he reaches the merchant, who sells the produce, he is not allowed to decide the price. It has to be sold on the basis of the market price and not according to his input cost, which was higher most of the time. On the other hand the merchant sells the produce at a price he decides and thus bagging the profit.

“The first time I took my tomatoes to the Mandi, I had to pay Rs 900 from my pocket, including the transportation and the best high-quality tomatoes was sold for Rs 1.25 per kg. That is where I realised that this model is not sustainable for farmers at all and that we have to go organic and create our own value chain,” says Prateek while talking to TBI.

As luck would favour, Prateek met Vinay Yadav, another educated farmer, who held similar views. The duo then decided to start their own value chain and sell their vegetables and grains, while skipping the middlemen. The variety of vegetables they grew were not enough, so the duo decided to form a group of farmers.

“You need to complete the basket to approach a customer and growing all the vegetables was not possible for just two people. So we took 5-6 months to build a team of 12 organic farmers,” says Prateek.

For the next few months they studied all the successful farming models across the country and even trained at Abhinav farmers’ club, Pune.

Once the plan was ready, the group was registered by the name of ‘Kalpavalli Greens Producer Company Ltd.’ as a farmer producer organisation (FPO). The members committed at least one acre of land each to the FPO and a cow each. The FPO was financed by banks A vendor was approached to build net houses in all the 12 farms.

However, the venture failed in the first year as most of the farmers were grain growers and had limited knowledge of growing vegetables. However, the largest reason for the venture’s failure was the switch to organic from chemical.

“When you switch from chemical to organic farming, it is like getting someone out of the ICU, you have to feed them and wait till they get back up on their own,” says Prateek.

The duo took up all the losses and made sure that the other farmers, who were not as well off,  were paid fairly. Once the soil was used to organic methods of fertilization, the next round of crops were successful and the FPO had a good amount of produce.

The team was much more confident with their second crop.

At the end of 2016, Prateek decided to finally quit his job and dedicate all his time to farming. His wife continued to work with Kotak, and fully supported Prateek’s decision to quit.

With a lot of experience in marketing and management, Prateek took charge of marketing their produce.

Their model was low cost – Prateek visited each of the farms in his car and collects the vegetables, he brings them back to his house in Bhopal and cleans them, grades them and packs them accordingly. The packed vegetables are then supplied to the consumers. With the help of many handy whatsapp groups, the orders started pouring in from family, friends and colleagues. The tremendous response led to a loyal set of customers.

“I got the first lot of veggies to Bhopal on 16th November 2016. I collect the veggies in my car and deliver them personally in my car till date. This also keeps the customer connected to what is happening in the farms,” says Prateek.

As the produce has increased now, Prateek takes the veggies to the Mandi twice a week!

“While people stay away from organic because they cost more, our motive is to keep the prices low so that more and more people can have access to healthy food,” Prateek says.

The team has more than 300 customers now and more farmers are ready to join the FPO now. There were farmers who were not getting a  good price for their organic produce, but are now being helped by this FPO. The team also gets offers from their customers who own land to use it to farm. The team has now started supplying grains and pulses along with exotic vegetables. Soon they are also planning to supply milk from desi cows. Prateeksha, who has been a constant support,  has also quit her job now and will soon join the FPO.

Recently the team has started two Farmer resource centres at Dhaba Khurd and Nathrula Ganj where anyone who is interested to switch to organic farming can take free training and sign an agreement with Kalpavalli Greens to sell their produce. The centre also provides all the resources required for organic farming at this centre.

“I came back to my village because farming was my first love. When I moved to my village, I had never thought that I would do community farming. But eventually, I realised that it was the need of the hour for the farmers. The USP of our model is that input cost is zero as we make all the organic manure and pesticides locally, there are no middle men and so the farmers earn double than what he was earning before.” says Prateek.

When asked if he misses anything about his corporate life Prateek says no, but leading a team and marketing definitely helped him in his new venture. He says that even if he is not making as much money as he did when he was a banker, the satisfaction of selling healthy food to the society is unmatchable. Nothing is more satisfying than agriculture.

You can contact Prateek at prateek1sharma@gmail.com or call him on 7987621152