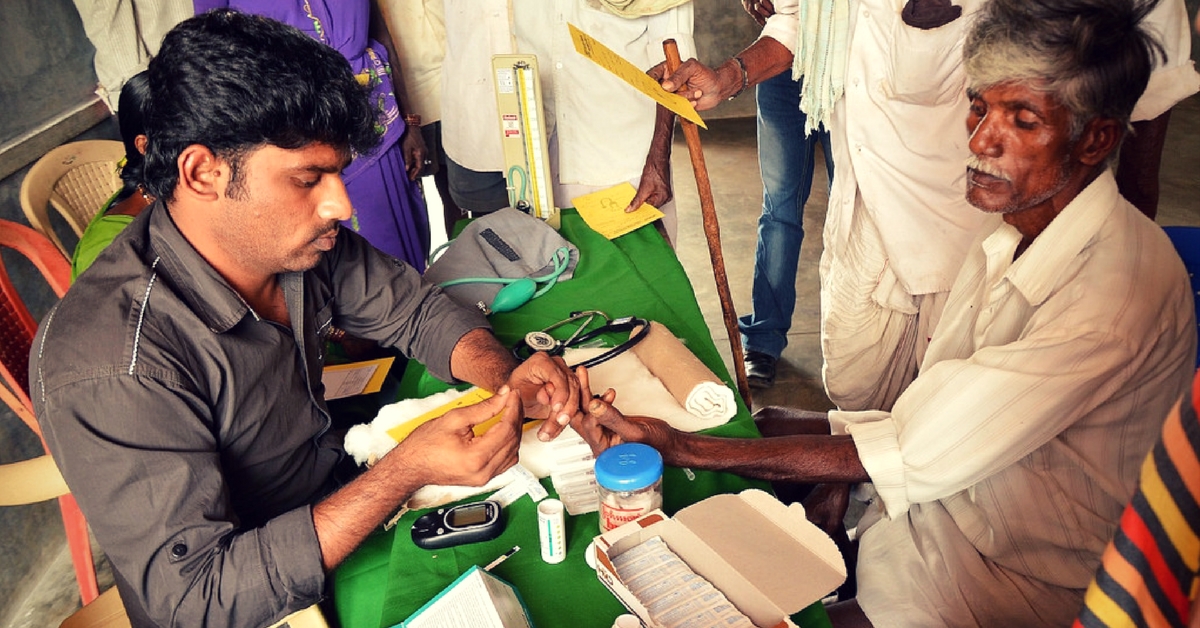 A significant amount of awareness needs to created around the disease with more focus on leading healthy lifestyles and proper dietary changes for all.

Mrs. Prathiba Singh wakes up in the morning to a warm glass of water mixed with lemon and honey to curb weight loss. Exercise is a must for all members of the family. Lettuce, wheat grass, quinoa, and kale are staple in the weekly grocery list. Daily meals consist of small portions made in olive oil and the wheat/ rice is replaced with millets. This is a regime commonly seen in higher income households in cities.

In stark contrast, her house help, Shilpa drinks multiple cups of sugar laden tea accompanied by maida biscuits throughout the day. Meals are meagre and consist of roti and dal laden with hydrogenated fat to mimic the taste of ghee, and almost no vegetable to accompany them. Children are treated to an odd samosa or a packet of chips. Large bottles of aerated drinks find their way into the household as a symbol of celebration and savings are spent on eating a burger at a mall.

Lifestyle changes, especially in the cities, have resulted in a change in the disease patterns.

This is very evident in the study that was carried out to understand the prevalence of diabetes and pre-diabetes across 15 states in India. The results are not very encouraging.

You might also like: How Millets Can Help Prevent Diabetes and Heart Disease While Saving the Indian Farmer.

One of the startling revelations of the study was the fact that the urban poor have a higher prevalence of diabetes in comparison to the urban rich. This is true for most rich states in India where migration from villages to cities is resulting in a larger pool of urban poor. While most of the higher middle-class population understands the importance of a healthy lifestyle and are making modifications to their diets and lifestyle, the less privileged are influenced by the marketing gimmicks adopted by large processed food corporations further abandoning their hitherto healthy lifestyles to embrace unhealthy ways of eating and living. This has led to an increase in the number of urban poor suffering lifestyle related diseases, primarily diabetes, further enabling an early onset of the disease.

The study also revealed low awareness of the disease where 50% of the individuals did not know that they had diabetes. Illiteracy, misconception about the disease, and absence of proper medical advice have added to the lack of knowledge about diabetes. The study also pointed to a large part of the population that had pre-diabetes i.e. was prone to diabetes due to key factors such as age, hereditary features and personal health history. While age and hereditary features are uncontrollable factors, personal health history can be altered with a positive change in lifestyle and dietary habits.

You might also like: Do You Think Diabetes or Heart Disease Is A “Genetic Problem”? You Need to Read This!

The study is a wakeup call to the nation. As a race, Indians are prone to diabetes. As a nation, the matter is of grave concern as more and more people with lower financial stature are inflicted by the disease today, which means soon, we will have a larger pool of people who will suffer from diabetes and its complications. The bad news is that there is no cure for the disease yet. However, the condition can be easily managed through early screening, regular treatment by specialists, and most importantly by making the right lifestyle adjustments.

As a nation, we can combat the disease by being responsible for ourselves and the people around us.

Simple steps to fight diabetes are:

1. Educate people around you about diabetes – it is no longer a rich man’s disease
2. Encourage people above 25 years of age to take a simple blood test, at least once a year
3. Ditch sugars, sugary drinks and fried foods
4. Exercise- Walking is an absolute must.
5. Eat fruits and vegetables as much as possible
6. Substitute white rice with brown rice or lower glycemic index white rice.

Dr Guha Pradeepa of the Madras Diabetes Research Foundation points out:
“Diabetes is a serious condition. If not controlled, it can lead to health complications and impact key organs of the body like kidney, eyes, nerves etc. 50% of the people with diabetes do not experience any symptoms until complications arise. Unhealthy lifestyle and obesity are the major causes of the onset of this disease. Early and periodic screening is crucial.”

Dr. Deepa of the Madras Diabetes Research Foundation says:
“Over the years, the average age of individuals prone to diabetes has decreased drastically. Today, anyone above the age of 25 with an unhealthy lifestyle is susceptible to diabetes. Since the symptoms are silent, it is important undergo a yearly blood test. Lifestyle modifications are a key to managing diabetes. Simple steps like consumption of fruits and vegetables, cutting down on junk food, regular exercise, regular check-ups etc. can help keep the disease at bay.”

About the author: Dr. R.M. Anjana is the Vice-President of the Madras Diabetes Research Foundation, Chennai