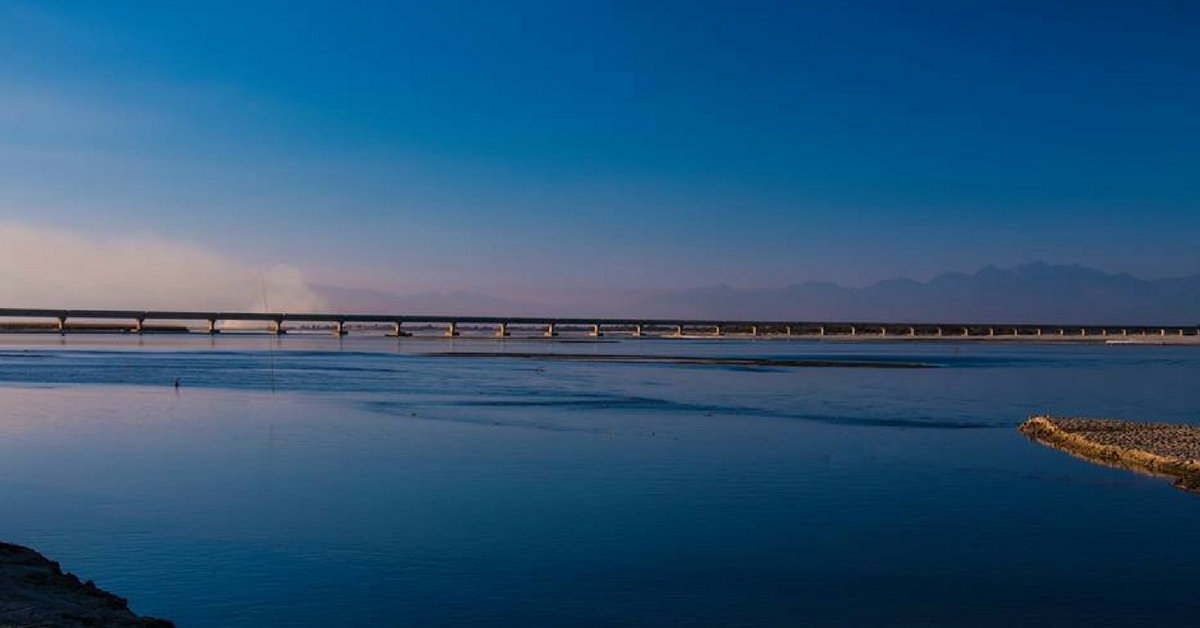 The Dhola-Sadiya Bridge stretching over the river Lohith. Source: Facebook

The Dhola-Sadia bridge in Assam, inaugurated by PM Narendra Modi, promises better connectivity in the North-east region and opens new avenues for Sadiya where it is located.

The longest bridge in India is now ready for the world to behold. The Dhola-Sadia bridge in Assam has been inaugurated by Prime Minister Narendra Modi, along with Union Road Transport Minister Nitin Gadkari.

A project enabling better connectivity in the North-east region, the inauguration was followed by the PM’s convoy crossing the entire span of the bridge.

Here’s everything you need to know about the historic bridge:

1. The bridge, with a length of 9.15 km and width of 12.9 mt, connects the village of Dhola to the town of Sadiya in the Tinsukiya district. It is also longer than the Bandra-Worli Sealink in Mumbai.

2. As the bridge becomes operational, people on either bank of the river can reduce their travel time by at least eight hours and a distance of 165 km. Earlier, the Brahmaputra ferry service between the villages would take around four and half hours, while another route via Parsuram-Kund bridge took around eight hours.

3. Spanning over the Lohit river, a tributary of Brahmaputra, the bridge will be especially useful for the army. The bridge which has been designed to facilitate the movement of heavy vehicles, including 60 tonne battle tanks, will enable troops to travel faster to posts positioned at Kibithoo, Wallong and Chaglagam, on the Indo-China border in Arunachal Pradesh, saving an estimated three- to four-hour journey from Assam.

4. The groundwork for the project begun in 2002, under the Atal Bihari Vajpayee government.

The construction of the bridge finally began in 2010, and has been reportedly built at a cost of ₹2,096 crore.

5. Once a thriving town, Sadiya has been struggling with transportation woes since an earthquake struck during the 1950s. The calamity resulted in a change of course for the Brahmaputra and half of the town was engulfed in days. The bridge will pave way for new avenues to open up for the town.

6. The bridge is slated to be named Bhupen Hazarika Setu, as a tribute to the legendary music director, poet and lyricist, Dr Bhupen Hazarika, who hailed from the town of Sadiya.

7. The project is the result of a public-private partnership between the Ministry of Road Transport and Highways and a Vishakapatnam-based private firm, Navayuga Engineering Company whose expertise lies in construction of large-scale structures like bridges and jetties.

8. With the North-east falling under a high seismic zone, the bridge was built using state-of-the-art equipment that included imported hydraulic rigs, and provided seismic buffers in all its 182 piers to withstand earthquakes.

You may also like: Soon, Travel From Mumbai to Elephanta by India’s Longest Ropeway, Over the Sea!

9. The bridge will prove to be a significant link in the region that will help people to commute from Arunachal to Assam.

Connecting people located even in the farthest regions of Arunachal, the bridge will help them reach Dibrugarh airport or the Tinsukia railway station up to five hours faster.

10. Not just the travel time reduction, the bridge promises to offer relief to the existing transport networks, inviting various developmental, health, educational and production activities and expediting industrial investments along with promoting the tourism sector.