The Bardolators of Bangalore, a collective of theatre enthusiasts from all walks of life, stage open-for-all shows and offer their unique take on famous plays.

All the world’s a stage — one of the world’s most quoted lines, it was written by William Shakespeare in his iconic play As You Like It. Centuries later, it’s more than just one sentence that keeps the Bard’s memory alive. Figuratively speaking, Shakespeare is alive and kicking. His plays continue to be read, studied and performed around the world and reinterpreted in new forms and languages.

In Bengaluru, a group of amateur actors have come together to stage Shakespeare plays in the city’s much-loved Cubbon Park. The Bardolators of Bangalore, as they call themselves, is a mixed bunch of lawyers, engineers, editors, designers, researchers and artists. Since 2015, they have staged four plays — Much Ado About Nothing, A Midsummer Night’s Dream and one that compiled iconic scenes from four Shakespearean plays. Their next production, Twelfth Night, will be staged this April.

“We are a group of friends who happen to love theatre,” says Ramya Jawahar, a lawyer and one of the actors. “Some of us were very familiar with Shakespeare’s plays, while some others weren’t.”

The group thrives on their camaraderie and a hands-on approach to acting and production. From direction to costume and music, the Bardolators manage everything themselves, often on shoestring budgets. Improvisation is key here. While costumes are borrowed from friends or put together from the actors’ own wardrobes, the background music is played by the actors themselves.

You might also like: This Arts Programme in Delhi Is Using Theatre to Help Teenagers Become Changemakers

Cubbon Park’s bamboo grove is the group’s preferred setting, and visitors to the park usually find the group during rehearsals in the weeks before a staging.

“Cubbon Park is a public space and we chose that space to ensure that everybody would be able to access it,” says Darshana, another lawyer who is part of the group. During their last production, which was staged in late 2016, over 2,000 people turned up for the shows. They were joined by casual visitors too, and despite the lack of microphones and usual stage paraphernalia, the actors received a thunderous applause.

Instead of ruing over lack of experience and training, the Bardolators approach acting with a sense of fun. The group tackles each play with readings, rehearsals and movie screenings to familiarize with the plot. Ramya says, “For the first three productions we had more directorial intervention. For [Twelfth Night], we’ve pretty much directed ourselves, and while it’s been chaotic it’s also been fun.”

The remarkable thing about Shakespeare, that makes the playwright relevant till date, is how his plots and ideas remain open to interpretation. The times, it seems, haven’t really changed too much. The Bardolators use this interpretive quality of the plays to their advantage.

“Shakespeare’s plays have many themes that continue to resonate with audiences. We feel they can be adapted to modern settings,” says Darshana. “For example, in A Midsummer Night’s Dream, we decided to switch the gender of the lovers to speak about same-sex love. We often cut down the scripts to create a faster narrative. We also incorporate lines and scenes where we believe the tedious Shakespearean English dialogue is inaccessible”

The open-to-all performances at Cubbon Park mean that nobody is turned away. It is heartening to watch people from all walks of life watch the play and enjoy the boisterous performances, even though they don’t always grasp the full meaning of the dialogues.

Juggling theatre with work, the Bardolators are often challenged for time. Yet, the audience has grown with every show. 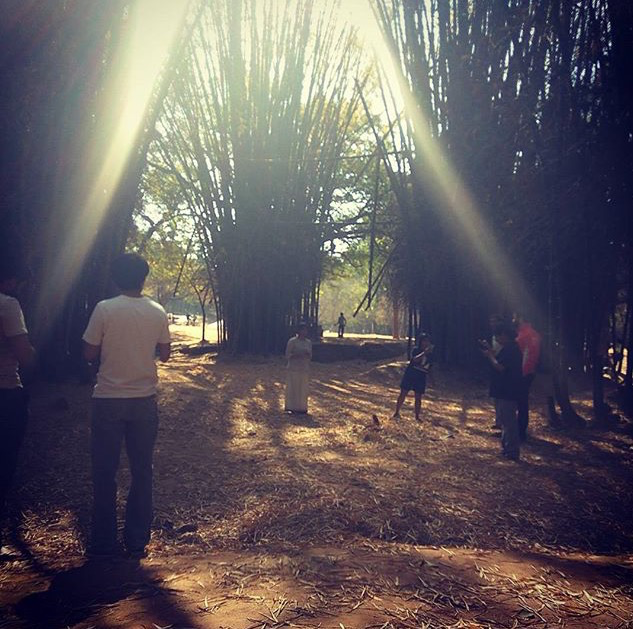 Rehearsals are conducted in the homes of members, usually before or after work days, and at parks and open places. Currently, the group has 11 members, but new people join every season and they are always happy to welcome amateur actors and anyone who may wish to contribute in production.

The plays are largely funded by the actors. “We do not raise funds before the play but we do pass a hat around during the performances,” Ramya says. “These contributions help us with the cost of props and costumes that we otherwise bear ourselves.”

The Bardolators have generated a lot of interest, but for the actors it’s a fun and enriching pastime they hope to continue. “For all of us, Shakespeare in the park is a way in which we have fun,” they say. “We otherwise have jobs and commitments and this experience is something that takes us away from our daily routines. We do Shakespeare for ourselves, and the audience comes along for the ride!”

Which is one play they would like to stage? Romeo & Juliet, comes the answer. And going by their
previous performances, it won’t just be another love story.

Twelfth Night will be staged on March 19 at Cubbon Park. Head to their events page for more details.