Rachel Varghese, a domestic abuse survivor, looks back at the time she spent in India as a part of the William J. Clinton Fellowship for Service.

Rachel Varghese, a domestic abuse survivor, looks back at the time she spent in India as a part of the William J. Clinton Fellowship for Service.

Neha’s suicide was the jolt I needed. She had been my junior at Azim Premji University where we both did our Masters. In my final year, her colourful dupattas and cheerful smiles had always caught my eye. When I heard the reason—depression brought on by an abusive relationship—it brought back memories that I thought I had buried.

Memories of continually walking on egg shells, not knowing what would trigger the husband’s anger. The agony of being rejected by the spouse, and the confusing slide towards zero self-esteem. The terrifying realisation that I could no longer trust the one I had married. The utter, utter sorrow when I was beaten up.

When I ended my marriage, I rarely spoke about it, only opening up to my closest kin. Their absolute support gave me the strength to pick up the pieces and start afresh. I found new friends, learnt how to drive, joined a music foundation and nourished my vocal skills, and gifted myself a bicycle. I moved cities, changed careers, started a Masters, and worked hard to nourish my battered self. At university, among a bunch of sensitive, inspiring and intelligent youngsters, I learnt to laugh and sing again. More importantly, I was able to close the door of my own past and find myself. There were several moments when I thought I should tell my new friends about what had happened to me, and every time, I walked away from that thought.

Neha’s death reminded me continually that she need not have died, that I could probably have helped. It made me realise that I could have reached out, should have spoken up. The regrets of could and should made me angry at myself.

I knew it was time to tell my story. When I did tell my story to my AIF Clinton Fellowship class in a life map presentation at the Midpoint conference, I did not know what would follow. The standing ovation was unexpected; what followed after was a game changer.

One Fellow told me that my speech made him recognise his own abusive behaviour and he had called his ex-girlfriend to apologise for all the times he had hurt her. Another Fellow said he stepped out immediately after my talk to call his beloved to tell her how much he appreciated having her in his life. A third Fellow sought me out to confide how she is still traumatised by her experiences in a past abusive relationship. In the meals that followed, I noticed several conversations amongst the Fellows about terrifying abusive experiences, about having had to grow up quickly, about still being wary.

Being able to speak about abuse and listening to another person’s story of abuse without being shamed, judged or reprimanded was my biggest A-ha! moment in my Fellowship journey. My speaking up had not just broken the silence for me but had also created a safe space for so many others who had experienced violence in relationships to speak up. This learning greatly shaped my understanding of dealing with intimate partner abuse, and guided my work at My Choices Foundation in Hyderabad, my placement organisation for my Fellowship tenure.

My focus behind Saath-Saath (“Together” in Hindi) was creating a supportive space for women survivors of domestic violence. There, they could feel comfortable with sharing their experiences, and express their fears and outrage without facing negative consequences.

The focus of  Saath-Saath’s group meetings is to give emotional solace, and end social isolation.

The group equips participants with the knowledge and awareness to make informed decisions and handle difficult situations with their partners. 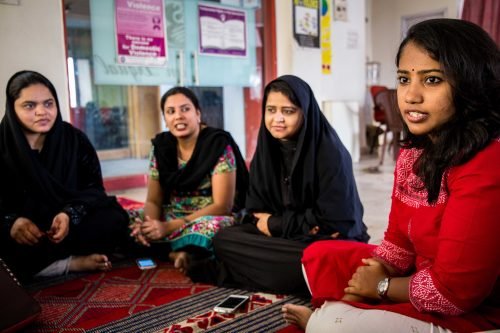 The first step is, undoubtedly, telling their stories.

My pilot group had three women from Hyderabad’s weaker socio-economic communities, each facing varying degrees of domestic abuse. For each of them, speaking up, and listening to others’ similar stories of abuse, was a hugely transformative experience. Experiencing abuse themselves helped these women to understand and empathise with other victims. As a result, they quickly became each other’s support and strength against the injustice of their situations.

Over time, these survivors are able to recognise abusive behaviour patterns and handle difficult situations with dignity and strength. Seeing the pernicious effect of patriarchal social institutions regulating women’s lives, they are determined not to put up with it. As one of these survivors says “What has happened with me, I won’t allow it to happen to another woman.”